The Case of Kumar Gunaratnam: Democracy is at Stake 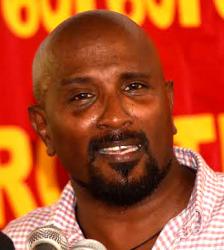 The case of Kumar Gunaratnam (KG) is a typical example of justice turning into its opposite. The Kegalle magistrate gave his verdict on March 31 imposing one year imprisonment and Rs. 50,000 fine on Kumar Gunaratnam for violation of immigration law, i.e., overstaying visa.

It appears to be a simple technical issue. Mr. Noel Mudalige, an Australian citizen, was granted visitor visa to enter Sri Lanka. After a month, he refused to go back and expressed his willingness to stay in Sri Lanka even requesting dual visa status as a first step. He was arrested and the police filed a case against him for defying immigration law of Sri Lanka. Hence, one may argue that the verdict given by the Magistrate is absolutely valid and legal. However, the real story behind this case has revealed time and again the true nature of the Sri Lankan democracy in its neoliberal phase.

Often times, a situation arises that revolutionaries have to leave their country when the respective states pose a threat for their lives. Russian revolutionaries including Lenin and Trotsky were forced by the Tsarist regime to leave Russia and to continue their political work in exile. In doing so they had to use forged passports, pseudonyms and names of dead people. It is a well- known story that Lev Bronstein had to escape from Tsarist prison and go abroad. In the process, he became Leon Trotsky.

Kumar Gunaratnam is a prominent leader and a member of the political bureau of Janata Vimukthi Peramuna (JVP), a radical leftist formation. JVP that was formed in the mid 1960s emulating the Cuban revolutionaries, organized a rebellion in 1971 and again in 1987-88 in Southern part of Sri Lanka. In the post 1987, it became Sinhala nationalist and stood for the defeat of Tamil militants led struggle against the Sri Lankan government. JVP led a second rebellion, but was crushed by the Sri Lankan government killing at least 40,000 youth and almost all of its central leadership.

The brother of Kumar Gunaratnam, Rajitham Gunaratnam, a JVP student leader, was also killed. Kumar was arrested but somehow managed to escape. He played a leading role organizing the JVP after 1987-89 debacle and became one of its central leaders. In 2005, JVP joined with the Sri Lanka Freedom Party (SLFP), a bourgeois party, to form a coalition government. A group led by Kumar Gunaratnam fought against the class collaborationist and racist politics of the JVP, and as a result, the group within the JVP conspired against him putting his life in danger, especially in an intensified war against Tamil militants. KG is Tamil in ethnicity. Those who were with KG advised him to leave the country.

Under the name of Noel Mudalige, KG left the island. He led his group from exile. When non-racist forces that fought against class collaborationist politics of the JVP had finally decided to break away and formed a separate party following Marxist principles, KG returned to Sri Lanka in 2011 using his Australian passport under the name Noel Mudalige. In 2012, he was abducted with another member of the political Bureau by the police and held unlawfully until the Australian government, on the requests made by the Sri Lankan civil society, intervened and acted to save his life. He was sent back to Australia. Just before the presidential election in 2015, KG was allowed to come back to support the candidate of the newly formed Frontline Socialist Party (FSP) in which KG is a member of the political bureau. As the new government asked all exiled political activists to return home, KG asked for the Sri Lankan citizenship that he never gave up. However, the new government, in spite of its democratic rhetoric refused KG’s request and ordered his arrest.

The above story reveals that the issue is not a technical one of overstaying one's visa. It is not a case against Noel Mudalige. The issue is over the right of KG to stay in Sri Lanka and to do politics he believes correct. He was born in Sri Lanka. He had been in Sri Lanka until he was forced to leave in 2011. He has never given up his Sri Lankan citizenship. There is no legal document that a person called Kumar Gunaratnam left the island.

Ensure his right to do politics in Sri lanka!!