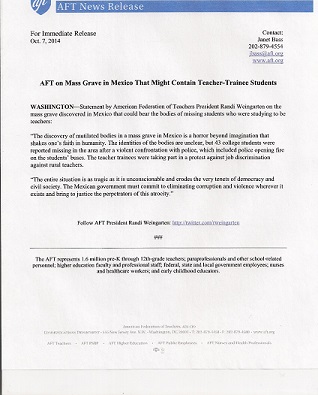 Although it took some time for US media to cover the story, it now clear: Mutilated bodies of teacher education students were found in a mass grave in Mexico.  In response, the American Federation of Teachers (AFT) issued a press statement by the union president, Randi Weingarten, calling for the “perpetrators of this atrocity” to be brought to justice.  The National Education Association has been mum. Shame on the NEA and its President, Lily Eskelsin Garcia for their public silence. It is especially unforgivable given AFT and NEA’s domination of the Education International, the international confederation of teachers unions.

AFT’s press release was welcome and needed as rebuke to the Mexican authorities (and the US government’s support of them) responsible for these murders. Still the AFT response falls far short of what we need because the atrocity was committed in the context of a new World Bank report about education in Latin America that makes teachers unions a target.  For governments ready and eager to rule with an iron hand, the report provides a license to kill.

The report argues that poverty in Latin America has to be solved by developing “human capital,” accomplished through the same measures used now in US cities that are all but domestic colonies, like New Orleans and Detroit: excessive testing that determines what is taught and how; replacing experienced teachers who come from the communities they serve with a revolving door of recruits from “alternate route” programs; eliminating legal protections for teachers, so as to give administrators complete control over staff.  The report suggests a hunting season – on teachers unions – when it notes “The deepest challenge… is not fiscal or technical, but political, because teachers unions in every country in Latin America are large and politically active stakeholders” (p. 3). The World Bank report urges stakeholders to break the power of the unions.

As Mary Compton observes in her invaluable website and resource about the global project to privatize education at any and all costs, the EI should end its collaboration with the institutions directing this project. The AFT and NEA are the majority organizations in the EI and hence control policy. They claim it is practical to be working hand-in-glove with people who are whipping up anti-teacher union sentiment and likely violence against activists.  My question for the EI: At what point does it become impractical to collaborate?  Their answer seems to be “When they’ve destroyed us.”

We need to reject collaboration with these architects of our destruction. One way to start is for the EI to publish a report and organize a campaign on the attacks on the reform movement of the Mexican teachers union that is similar to the one on Colombia’s violence against teachers union activists in that country.  If we do not mobilize international pressure, the Mexico massacre may be the first of other violent attacks on teachers in Latin America fighting for public education and democracy.