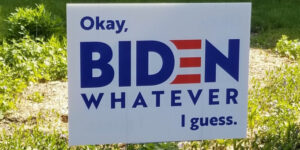 Or to put it concisely, as long in the contest is between the left and the right wing of capitalist democracy, socialists have proclaimed and will continue to proclaim our unwillingness to leap over a mile for the sake of an inch.

This is the crux of our refusal to capitulate to lesser-evil politics. For whatever wing of capitalist democracy prevails electorally, the working class and the oppressed are the losers. That is why we reject the blandishments of cooptation, of subordinating our organizations and our perspective to advance the cause of an enlightened, liberal capitalism.

Socialism, in its drive to extend and empower democracy, is ultimately compelled to destroy the economic and social base of capitalist power; capitalist democracy is a contest about the minimal level of concessions the state can or must provide to maintain social peace while preserving the interests of the ruling class.

And if this election were no different than most others, we would be foolish to advocate a vote for the Democrats. Whatever pressure we can place on the system to grant concessions can be waged more effectively from the outside, through mass mobilizations. But whether we sit out such “normal” elections or vote in protest for a “third” party, we should be clear. Such votes as we cast are not votes for independent politics. Only a mass working class party has the coherency to propel independent politics.

The Green Party and previous movement oriented parties are cross class, issue oriented alliances, no different than the movements from which they arose. Votes for such parties are a vote of no confidence in the system. And nothing more. [1]

But this election is like no other election and the insistence on a formulaic response based on past assumptions is woefully inadequate. Modern Republicans have always rooted their power in the institutional arrangements that are most hostile to democracy: voter suppression, gerrymandering, the unrepresentative Senate, the electoral college and the unelected federal judiciary. And this is true of the Trumpian Republican Party as well.

But a Trump victory takes this miles further and is the harbinger of a post-democratic America. The pre-Trumpian Republicans availed themselves of the built-in constitutional holes in American democracy. Even they, however, drew a line at undermining the institutional safeguards of accountability. They released their taxes, turned their business interests over to blind trusts and acceded to the conventional norms of transparency. They were weak democrats, but democrats nonetheless, who never renounced the peaceful and orderly transition of power.

I have no interest in navigating the competing claims that Trump is a fascist or a bonapartist. His authoritarianism has different roots. Trump’s narrow world view, if you can dignify it as such, was probably shaped more by the organized crime milieu that is a fixture of New York City real estate development scene and by his mentor, Roy Cohn – of Joe McCarthy fame, who guided him through the strong-arm labyrinths of that world – than it is by any past European dictator.

We have already seen in terrifying embryonic form what a post-democratic America would look like. The justice department, intended as an independent agency, has been converted into Trump’s personal consigliore. Government has become a means for enriching his family. His emissaries are sent abroad to invent scandals made to discredit opponents. His crowds routinely demand that enemies be locked up. Bureaucrats unwilling to tow the line and whistle blowers are summarily fired, deprived of pensions and black listed. White nationalism and Qanon conspiracies gin up an ever roiled base, who are conditioned to see Trump as their knight on horseback defending them against real and invented threats from evil, Democratic pederasts who unleash Antifa to maraud cities and terrify its occupants. He has winked at the KKK, the Proud Boys and race war accelerationists such as the Boogaloo Bois.

We have seen the Center for Disease Control and the National Institute for Health being strangled as reliable sources of scientific data and guidance. Environmental regulations are being torn up. And bureaucracies are warned not to collect data that contradict business interests. Democratic cities, with large minority populations, are being starved of federal assistance. Trump incites private armed goons to “open” the economy and intimidate elected officials of states run by the opposition party.

And he has dusted off the 1807 Insurrection Act, which permits the armed forces to suppress civil disorder when law enforcement is unable to. It was a law used to suppress the Pullman railroad strike in 1894, a strike led by Eugene Debs. Of course it has been used many other times as well. But rarely so ominously.

Barr has deployed the Department of Homeland Security, the Department of Defense and the Department of Justice against demonstrators under the pretext of “protecting” federal property against demonstrators, who may have black bloc anarchists, looters or agent provocateurs in their midst. Federal intervention initiated by “operation Diligent Valor” unleashed hundreds of agents to the streets of Portland. 225 federal agents were sent to Kansas City, Missouri and over two dozen sent to Albuquerque, Chicago, Cleveland Detroit and Milwaukee. For personnel, Trump has drawn on the FBI, the Bureau of Alcohol, Tobacco and Firearms, Customs and Border Protection, the Drug Enforcement Administration, Immigration Enforcement, the US Marshals Service, the Federal Bureau of Prisons and the Federal Protective Service. They have been deployed in unmarked vehicles, wearing combat fatigues and with insignia of their affiliations obscured to pluck people off the street.

In other words, Trump has created a veritable praetorian guard and provided us with a clear demonstration of what life will look like for the left in a Trumpian future. Are we paying attention?

And as far as challenging the election results, he has pre-loaded the courts with compliant reactionaries, stated brazenly that he may not accept results that depend on mail-in ballots and is ready to deploy an army of election intimidators in contested districts to challenge minority voters and make sure that every vote does not count. He has made it clear that he will tie up the election in the courts in the hope of throwing the elections into the hands of state governments where Republicans outnumber Democrats. And he has hinted that he sees no reason for him to restrict himself to only two terms.

So comrades, the question is whether you can make common cause with all other small-d democrats – the trade unionists, minorities, environmentalists, anti-militarists, alarmed citizens of all classes- who flock to the Democratic Party as a means to defend their and our hard won rights?

Or are you going to insist that the defense of democracy is simply a lesser evil to authoritarianism and therefore not worth making common cause as the left wing of democracy with other democrats through the only electoral vehicle that can effectively mount that challenge within the next two weeks?

[1] This is not to deny that they also have the potential for leveraging movement power by threatening the Democrats to take seriously pressing social issues such as climate change, Black lives, and LGBTQ+ rights or risk defection and possible electoral debacle. They are, in this sense, a form of pressure politics – an external faction of liberal politics – that willingly faces piecemeal dissolution to bolster the Democratic Party when the DP signals its willingness to accommodate their concerns. That is the fundamental reason why protest politics rarely gain traction. They can be picked apart by the Democrats, who privilege one movement against the other, until a leadership devoid of its base is all that remains.

And, when unwilling to make concessions, they become the playthings of the two capitalist parties – Democrats who seek to deprive them of their ballot lines; and Republicans who seek to advantage themselves by cynically promoting the Greens through back door arrangements aimed at splitting the Democratic vote.

Worse, socialists ourselves are often delusional about what hard-core Green members want. Along side the Howie Hawkins class-struggle wing is this sentiment, from Steve Welzer who predates Hawkins as a longtime Green activist.

It’s not a question of socialism finally (after almost two hundred years!) gaining traction. Instead, we need to recognize that the movement for actual socialism is fading away (“actual socialism” being: generalized social rather than private ownership of the means of production, with the idea that the working class will be the agency of social change).

Green politics has a growing degree of resonance worldwide due to the obvious ecological imperative to scale down and live more lightly. Old-paradigm leftists react to that with angst about “austerity.” But the gradual greening of society will be a source of liberation. Our current lifeways are stressful on both people and the planet.

We don’t need “workers’ councils.” We need to rejuvenate local community life. The idea of working class revolution is delusional. The endeavor to (finally) create “a labor party that struggles for a working class government” is chimerical. The left needs to let go of its retrograde Red-worldview thinking. Green analyses and prescriptions are very different. The fate of the left depends upon shifting the paradigm.”

So, if you think the Green Party has an educational role to play for socialism, perhaps this statement is worth mulling over.

The article above was originally published in Workers Liberty.

Correction: The text has been changed to reflect the correction on the railroad strike led by Debs, as noted by Bennett Muraskin.