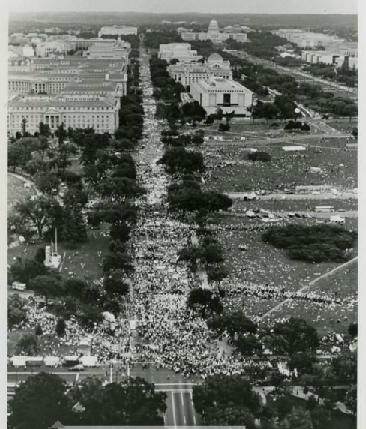 But like all newborns, this infant movement has a great deal it must learn to survive, let alone grow powerful enough to challenge the arrogant elites who now aim to control our lives and bodies. The March's temerity and unwillingness to call out systemic racism was dangerous and life-threatening. Still, I was heartened to see more than a smattering of men and women of color, willing to be a small minority for now. So much resistance has already come from Black Lives Matter and immigrants’ organizing from which we should learn.

“The tone of the march was not so much militant as excited, even joyous….The comment over and over was, ‘Can you believe this?’ Nobody was disappointed.” That description is of another movement and march, (pictured in the photo), Solidarity Day, organized by the AFL-CIO in Washington DC, on September 19, 1981. It drew 250,000 participants to support PATCO, the union representing air traffic controllers, fired by Ronald Regan for striking. The AFL-CIO was pushed to use its resources for one day and showed in that brief moment what labor might bring. It rented the DC Metro, making it free to all users, and bussed in a remarkably diverse group of marchers. Labor remains, as it has been since the CIO, the least racially segregated institution in this country, less segregated than churches and schools.

PATCO and labor were felled despite this remarkable, temporary show of labor's potential and solidarity. Reagan won and the labor movement never recovered its capacity and will to use its most powerful lever, the strike. So analysis of labor's defeat should inform how we now confront the Trump administration: No single issue no matter however life-threatening, not even climate change, no single constituency however large or vocal, not women, not labor, not Blacks, or immigrants, none by itself can defeat the powerful elites who now control the US government.

Though a few unions officially endorsed the march and individual unions sent small contingents, the Women’s March lacked the institutional muscle we have to push labor to contribute, the kind it demonstrated (albeit fleetingly) in Solidarity Day. Pussy power can go only so far alone. It needs allies. To have an ally you have to be an ally, showing up in word and deed. We need a program that encompasses the needs of all humanity, commitment and information on how to resist in multiple ways. We need an electoral vehicle that will fight to turn our demands into laws. Like many in the march, I do not trust the Democratic Party, which has already started their compromises/betrayals. Creating a new party that is controlled by the people it says it serves is a huge, unavoidable challenge.

Let’s not romanticize the dangers our new movement faces or the hard road in building unions that fight. But at the same time remember birth is never easy. Phyllis Jacobson, a founder of New Politics, once remarked to me when we were discussing labor – giving birth, that is – that if women vividly remembered pregnancy and labor, they’d never have more than one child and the society wouldn’t be able to reproduce itself. Fortunately for humanity, a kind of amnesia sets in. We forget the pain and see only the great contribution we’ve made.

Here’s to pussy power and labor.

Posted January 22, 2017 Civil Liberties/Repression, Electoral Politics, Gender & Gender Politics, Human rights, Labor, Left Politics, LGBT Issues, Racism, Social protests, War and peace by newpolitics
About Author
LOIS WEINER writes widely about education, labor, and politics, specializing in teacher unionism. Her new book looks at lessons for the Left  in capitalism's alteration of work and education, and how teachers and their unions can resist with support to and of movements for social justice.