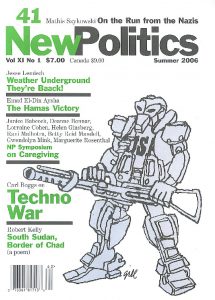 END_OF_DOCUMENT_TOKEN_TO_BE_REPLACED

With the growth of U.S. imperial power and its military reach, warfare today extends across the cultural as well as the institutional and battlefield terrains, the result of great technological changes now altering the very character of modern combat. Expanded military influence within the corporate media and popular culture is an inevitable outgrowth of the largest war machine the world has ever seen.

The Hamas Victory and the New Politics that May Come

The title to this article may sound terribly pretentious since, for all we know, in the coming months the Hamas government may very well end up under siege like Arafat and his entourage.

The Wages of Care: Change and Resistance in Support of Caregiving Work

Industrialized societies have done some things well. They increased the standard of living for large numbers of people, they opened up opportunities for knowledge not found in most agrarian cultures and they have advanced technology to the point where we can explore the solar system and transplant a human heart.