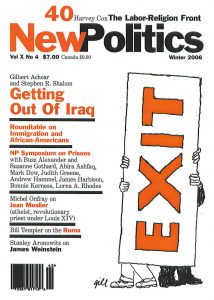 Getting Out of Iraq, Gilbert Achcar and Stephen R. Shalom
NP Symposium on Prisons

A Window for Reform, Judith Greene

Escaping into Prison with Fox, Lorna A. Rhodes

END_OF_DOCUMENT_TOKEN_TO_BE_REPLACED

Roundtable on Immigration and African Americans

Stephen Steinberg’s “Immigration, African Americans and Race Discourse” in our last issue of New Politics (#39) elicited several responses. Here they are with Steinberg’s rejoinder. Steinberg’s article, together with a different set of responses and a reply from Steinberg, also appears in the Winter issue of New Labor Forum. We urge readers to follow this debate in both venues. – EDS.

A Review Essay: In Search of Economic Justice

Robin Hahnel has written an important book that will be of real value to all libertarian socialists (a term he uses very broadly to cover anyone who wants to replace capitalism with a system characterized by the direct control of workers and consumers over their own economic activities).

Human Rights and the Colombian Government: An analysis of state-based atrocities toward non-combatants

The Colombian civil war, similar to other Latin American conflicts over the past 50 years, has had a large portion of non-combatants mortally affected by the horrors of conflict. However, those killed or injured in Colombia are not indirect results of the discord but are in-themselves strategic military targets (Stokes, 2005; Lernoux, 1982). The reasoning behind invoking this aggression against the unarmed Colombian populace is due in part to the ever-increasing strength of the primary insurgent movement within the country.

Neoliberal Strategies to Defuse a Powder Keg in Europe: the "Decade of Roma Inclusion" and its Rationale

Empire is characterized by the close proximity of extremely unequal populations, which creates a situation of permanent social danger and requires the powerful apparatuses of the society of control to ensure separation and guarantee the new management of social space.[1]

Mar del Plata, Argentina: The (People's) Summit of the Americas

On November 2-5, as two dozen heads of state gathered in Mar del Plata, Argentina for a hemispheric summit to negotiate trade agreements, thousands of global justice activists, I among them, participated in a concurrent "People's Summit" ("cumbre de los pueblos") or "counter-summit" ("contracumbre"). The official summit meetings were moved to Mar del Plata, a seaside resort which is a five-hour bus or train trip from Buenos Aires, to deter mass protests.

Does it matter that most of the problems that disproportionately affect black Americans don't stem from racism — or at any rate, modern day racism? . . . These issues just aren't particularly black anymore.
William Raspberry[1]

Another American Dilemma: Race vs. Immigration

Ever since America's negro slaves were emancipated after the Civil War, our nation's generous immigration policies have worked against the interests and advancement of African Americans.

A Reply to Stephen Steinberg: Finger-Pointing Toward "Freedom Now!"

I imagine Stephen Steinberg astride a muscular white horse, whip in one hand, pistol in the other, riding to scourge the American left of its racial amnesia. Or he's a biblical prophet, imbued with the divine spirit and setting the highest standards for the community. Sometimes the need for such a seer is self-evident, and sometimes Steinberg fairly meets it. Sometimes.

Steve Steinberg highlights a critical issue at an important time. Steinberg is right to draw our attention to the impact of immigration on the project of progressive politics, particularly as it relates to the plight of African Americans.

"Black people should do more to help themselves. . . . We worked for everything we have. They should too." (Cuban-American Miami resident)

"[Whites] are racists by tradition and they at least know that what they're doing is not quite right . . . Cubans don't even think there is anything wrong with it. That is the way they've always related, period." (African-American Miami resident)* This is the Renaissance,
everything is for sale. The poor man
is greedy (that's why he's poor –
does Ficino tell us this, or Bruno?),
ill-dressed, his hair a mess.
Yet this transaction is directly underneath
the glory of God.
These characters (dubious seller,
too-comfortable doubtful buyer)
are closer to the Divine Light
than Mary is. What does this mean?

After Wojtyla: Thoughts for the Times on Democracy and Faith

The spectacle of adoration following the death of Karol Wojtyla, also known as Pope John Paul the Second — maudlin and baleful as it was — was also time wasted by the American left. What incremental analysis it fostered came from the ranks of the faithful, not of the irreverent.

Jean Meslier and "The Gentle Inclination of Nature"

I. Of a Certain Jean Meslier

Michel Onfray, the brightest star among the younger French philosophers, is a brilliant prodigy, a gifted and prolific author who, at the age of only 46, has already written 30 books.

There is Good News and Bad News: Religion and Politics

Once upon a time, just a few decades back, culture critics were confidently predicting the demise — or a least the decline — of religion. Technology, literacy, education, science would take their inevitable toll. Religion would survive, perhaps, in small enclaves, family rituals, and folk festivals. But religion would never be a factor in the public sector, the "political realm." The dead would bury the dead.