For Peace and Unity Among all Peoples 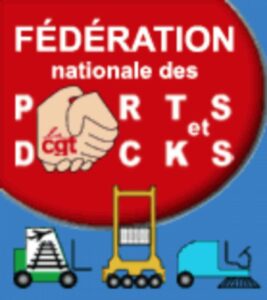 The National Federation of Ports and Docks, CGT, calls all of the unions of Dock Workers and Port Workers to join together in solidarity for one hour and stop work between noon and 1:00 p.m. on Wednesday, March 16, “For PEACE and unity among all peoples.”

For our union, the adherence to humanist and pacifist values is a living reality. We have always mobilized throughout our history to stop French arms shipments to Saudi Arabia, in the war against Yemen, or Indochina…. [Vietnam]

Our federation has always worked for peace in the world and for FRIENDSHIP between peoples.

In the conflict that involves the Ukrainian government, Russia, and NATO, the Dock Workers and the Port Workers call for a stop to this war and for respect for the self-determination of Peoples by themselves, to fight against ALL imperialism that decimate countries, their economies and that murder in the service of powerful economic interests, pushing populations into exile, to flee for fear of bombs, blood, and misery.

All refugees and migrants should be welcomed in France and in Europe whatever their nationality.

Arms must be quieted over the entire planet.

We need a world politics of peace and multilateral disarmament. To work for cooperation and development among Peoples and against the escalation of war.

For all of these reasons, we call upon the National Federation of Ports and Dockers, CGT, the Dock Workers and Port Workers to strike for one hour between noon and 1:00 p.m. on Wednesday, March 16, 2022, organizing financial and material solidarity for the victims of the war in Ukraine.