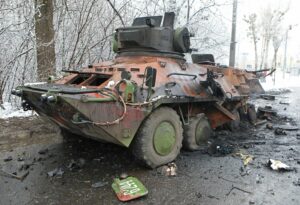 Ukrainians destroyed this Russian armored vehicle, one of many.

This assertion–“The Russian army is a paper tiger and the paper is now on fire”–made by Brett Friedman, a reserve officer in the U.S. Marine Corps and a professor at the U.S. Naval War College, should not be understood as the blissful belief that the “steamroller” would not have the means to achieve its war goals: the annexation or dismantling of Ukraine. “Russia’s [military] shortcomings are unlikely to matter in the long run. They have enough ability to brutally force this thing,” Friedman warns.

However, it gives us an indication: the objective of overthrowing the Ukrainian government through a blitzkrieg, which would have led the Russian army to Kiev, has not been achieved. If the courage and determination of the Ukrainians play a decisive role, it is nevertheless necessary to examine – succinctly and with our weak means of analysis, as the left has been alien to military reflection for ages – some of the elements that allowed this victory over the blitz. A first grain of sand that could well cost the ruling clique in Moscow dearly.

The editorial presentation of the first volume of this book—Liberty and Democracy for the People of Ukraine—evoked the grains of sand that could grind the gears of the Russian war machine. On February 28, the date of the invasion, when the organizing team of Syllepse Editions began to think about this publication, the grains of sand seemed to be only an idea. Would this idea become a  material force as the Russian military faced a novel defense, and might we not try to understand how acts?

If Russian imperialism has suffered this setback, it is above all thanks to the extraordinary and unexpected resistance of the Ukrainian army and, more broadly, of the Ukrainian population (100,000 people enlisted in the territorial defense units; which in no way excludes other forms of citizen involvement in the resistance to the invasion).

According to the London Guardian, several military analysts suggest that, poorly informed by the Federal Security Service or FSB (ex-KGB), “The Kremlin had a totally phantasmagorical idea of the reception its armies would receive” when entering Ukraine. It is now known that Russian prisoners said their officers had “assured them that they would be welcomed as liberators.” While the Russian army was waiting for “flowers and cheers”, it was greeted by “bullets and bombs” and by civilians “trying to block the columns of tanks by singing the national anthem”, notes the British daily.

The low morale of the invading troops is probably not unrelated to Putin’s plan getting relatively bogged down in the blitzkrieg. The Guardian’s correspondent in Lviv notes that the Russian soldiers had only three days’ rations and that fuel ran out.

Interviewed by Vox, Henrik Paulson, a professor at the Stockholm War School, is convinced that the Kremlin thought it would “reach Kiev in 48 hours”. Therefore, he writes, “most of its decisions were shaped by this strategic choice, itself shaped by prejudice”: the Ukrainian army would not fight and would quickly collapse. In such a conflict, notes the Swedish specialist, “traditional military doctrine requires the intensive use of so-called ‘combined weapons’ […] such as tanks, infantry and aviation, deployed simultaneously and in a complementary manner. This has not been the case: it is “a tactical choice that makes sense if you think you will only encounter symbolic resistance…”

Questioned by Le Monde, the chief of staff of the French army confirms that the “problems of combativity” encountered by the invading army and indicates that the unforeseen duration of the offensive will force the Russian command to “engage the second echelon” of its forces, which was certainly not planned. This, as we know, poses immense logistical problems.

Commentators are now evoking a “Grozny-style” scenario: massive bombings and siege of major cities, with their corollaries: cutting off the supply of water, electricity, food, street fighting. According to an analyst at the Institute for the Study of War, Putin did not want to implement such a scenario from the outset, as it contradicted his “narrative that this was not a real war.”

To stick to this first phase of the war, the Washington Post believes that the Ukrainian armed forces are engaged in an “asymmetrical” strategy aimed at breaking the Russian attacks. The Russian army has, despite the imposing disparity of forces involved, presents “many static targets”, especially because of logistical problems: “It is gold bullion for a force harassing the enemy,” says a military analyst in the Washington daily.

“The attack on Russian support lines,” says a former Ukrainian defense minister, is strategically “important to reduce Russia’s superiority.” Russian logistics convoys, he notes, “are spread over a vast area on several fronts.” In addition, because it’s winter, even when not running, the Russian engines idle to protect them from the cold and maintain a little heat for the soldiers. This makes fuel supplies “a huge challenge.” Instructions were therefore given to the units of the Ukrainian army, including territorial defense, not to directly attack armored vehicles – a mission carried out by drones provided by Turkey – but transport vehicles (gasoline, supplies, ammunition …) unarmored, “and often driven by poorly trained Russian soldiers”.

According to the president of the Center for Defense Strategies, it is by blocking roads and thus immobilizing tanks and motorized artillery that they can be more easily destroyed or captured. Videos posted on social media actually show piles of vehicles destroyed and others abandoned by their drivers.

Equipped with relatively light anti-tank missiles, Ukrainian units, very mobile, can thus attack the convoys before disappearing. As an aside, we find in this organization the implementation of some of the theses defended, several decades ago, by Guy Brossollet (Essai sur la non-bataille, Belin, 1975) and Horst Afheldt (Pour une défense non suicidaire en Europe, La Découverte, 1985). Ironically, according to the Washinton Post, it is among other things because of the decentralization – described as a “shortcoming” – of its army that Ukraine could not be admitted to NATO… The military specialist interviewed hit the nail on the head: “[There are] disparate pockets of resistance, you see units at the battalion level fighting independently, which is perhaps a blessing in disguise. It actually helps them now because they don’t depend on centralized command and control systems.”

As for the powerful popular mobilization, Vox points out, it is inspired by the practical lessons of the Maidan revolution, participating in the territorial defense of course, but it going far beyond: “Citizens use their skills and contacts to fill the gaps of the government and the armed forces and find means, often informal and improvised, to contribute to the war effort. For its part, the Ministry of Foreign Affairs announced 20,000 enlistments in the “international brigade” – it is I who deliberately  give this name – which is being formed.

Western military officials are not mistaken: “There remains an unknown: How will Russian opinion react after ten days of a ‘special military operation’ that does not work at all as Putin had envisaged for months?” concludes General Pellistrandi, editor-in-chief of the journal National Defense,  in its editorial of 5 March. Indeed, every day of fighting is a day of winning, every day of fighting is a grain of sand in the Putinian war machine: the Russian army suffers losses (we know the psychological shock of the repatriation of “body bags” on the families of conscripts killed) and possibly defections. And in addressing the mothers of Russian soldiers taken prisoner, the Ukrainian government remembers the powerful Union of Committees of Mothers of Soldiers of Russia that is sure to be an additional grain of sand. With each passing day, the Putin regime will face growing internal resistance – whether it be mass protests against the war or a crisis of confidence within the Russian political and military elite.

Sources: The Guardian, Vox, The Washinton Post, Institute for the Study of War, Janes, The Kyiv Independent, National Defence.

Posted March 7, 2022 Russia, Ukraine, War and peace by Dan La Botz
About Author
Patrick Silberstein is a member of the Syllepse editorial collective in Paris, France.