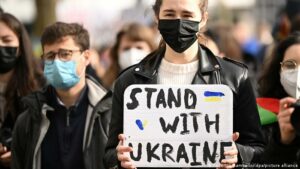 The “Social Movement”’s appeal to Leftists around the world on how to help Ukraine stop Russian aggression and rebuild cities.

Greetings from Ukraine. As you know, there is a full-scale war going on in our country. Towns and villages are being destroyed and people are dying.

Social Rukh, which stands up for workers’ rights and fights for the ideals of democratic socialism. We’re doing our best to stop the war unleashed by Russian imperialism and get back to solving socio-economic problems. We hope that leftists around the world – for whom working-class solidarity and an anti-war stance are core values – will help us do just that.

Our people are heroically resisting the invaders, but the forces are not equal. We need international solidarity against the hydra of Russian imperialism.

We want to see Ukraine free and socialist.