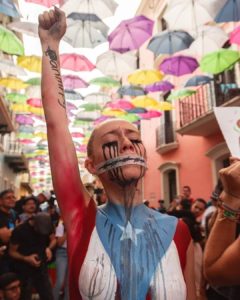 We express our solidarity with the people of Puerto Rico in their struggle against the corrupt government of Governor Ricardo Rosselló. This Friday marks seven days of massive protests demanding the resignation of the governor and his followers. In spite of attacks with tear gas, rubber bullets and assaults and arrests by police these protests have grown in the capital San Juan and in all corners of the island. On Wednesday, July 17th more than 350 thousand people marched through the streets of the capital, a demonstration without precedent.

The protests began with the accusations and arrests of various heads of government agencies of the Roselló administration. Among these was that of the ex-Secretary of Education, Julia Keleher.  Keleher, besides granting contracts to her followers, distinguished herself by implementing the privatization of the public education system and the closing of more than 400 schools. The affected communities as well as the teachers’ organizations have been fighting these policies since 2017. Now the entire population has come together to denounce Keleher and all that she represents, neo-liberalism and its accompanying corruption.

Adding to the accusations against Keleher and the other government functionaries is the publication of the chat in which they participated and circulated comments made by Rosselló, other administration officials and certain followers. The more than 800 published pages reveal or suggest an enormous number of crimes such as obstruction of justice, the dismissal of workers on political grounds, the punishment of opposition leaders such as Manuel Natal of the Victoria Ciudadana Movement, and the use of public funds for personal ends.

But, above all, the chat unveils the machista attitudes, and the homophobic and racist views, of its participants.  It offers a snapshot of the mentality of the privileged class that governs the country as it would its own private property with contempt for the population even though it publicly presents itself otherwise.  Within the chat one can see the manner in which they ridicule the deaths of government critics, the stored cadavers that were a result of Hurricane Maria, and the grassroots activists from the same government party.

The people of Puerto Rico have decided that such a person cannot continue to be governor and for the past week have demanded his resignation.

We know that Rosselló is only a part of the problem.  Puerto Rico is living in an economic crisis of more than a decade. It has lost 20% of the employment of 2007. The economic crisis has translated into a crisis of public debt that has reached 70 billion dollars. In order to pay the debt the Board of Fiscal Control installed by the Congress of the United States have decreed austerity measures that impoverish the country and deepen the crisis. Because of this the call for Rosselló to resign is accompanied by the rejection of the Board and the demand to audit the debt. We do not doubt that a victory against Rosselló would be the best basis for continuing the struggle on these other terrains.

We are expressing our admiration for the persistent struggle by the people of Puerto Rico, an example for all struggles throughout the world.  We demand the release of those arrested and accused as a result of participating in the resistance.  We unite to the call of the immediate resignation of the Governor Ricardo Rosselló.