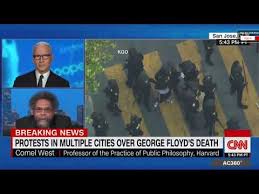 Dr. Cornel West said on Friday we are witnessing the failed social experiment that is the United States of America in the protests and riots that have followed the death of George Floyd at the hands of Minneapolis police. West told CNN host Anderson Cooper that what is going on is rebellion against a failed capitalist economy that does not protect the people. West, a professor, denounced the neoliberal wing of the Democratic Party that is all about “black faces in high places” but not actual change. The professor remarked even those black faces often lose legitimacy because they ingratiate themselves into the establishment neoliberal Democratic Party.

“I think we are witnessing America as a failed social experiment,” West said. “What I mean by that is that the history of black people for over 200 and some years in America has been looking at America’s failure, its capitalist economy could not generate and deliver in such a way people can live lives of decency. The nation-state, its criminal justice system, its legal system could not generate protection of rights and liberties.”

DR. CORNEL WEST: And now our culture so market-driven, everybody for sale, everything for sale, you can’t deliver the kind of really real nourishment for soul, for meaning, for purpose. So when you get this perfect storm of all these multiple failures at these different levels of the American empire, and Martin King already told us about that…

And what happens is we have a neofascist gangster in the White House who doesn’t care for the most part. You’ve got a neoliberal wing of the Democratic party that is now in the driver’s seat with the collapse of brother Bernie and they really don’t know what to do because all they want to do is show more black faces — show more black faces. But often times those black faces are losing legitimacy too because the Black Lives Matter movement emerged under a black president, a black attorney general, and a black Homeland Security [Secretary] and they couldn’t deliver. So when you talk about the masses of black people, the precious poor and working-class black people, brown, red, yellow, whatever color, they’re the ones left out and they feel so thoroughly powerless, helpless, hopeless, then you get rebellion.

We’ve reached a point now a choice between nonviolent revolution — and by revolution what I mean is the democratic sharing of power, resources, wealth and respect. If we don’t get that kind of sharing, you’re going to get more violent explosions. Now the sad thing is in the neofascist movement in the White House, you have some neofascist brothers and sisters out there who are already armed. They show up at U.S. capitol and they don’t get arrested, they don’t get put down. The president praises them. See what I mean? …

White supremacy is going to be around for a long, long, long time, don’t be surprised when this happens again. Try again, fail again, fail better. That’s the blues line of our Irish brothers. But the question is we must fight. Even in the moment where we have a failed social experiment, we must fight. We must have an antifascist coalition against the White House-Republican party. We have to tell the truth about the milquetoast cowardly activity too often we see too often in the neoliberal wing of the Democratic Party.

Originally posted by Ian Schwartz at https://www.realclearpolitics.com. Cornel West is a sponsor of New Politics.