Why We Need Socialist Disability Theory and Critical Disability Socialism 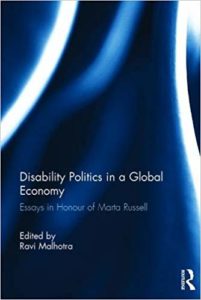 The modern concept of disability—indeed, the conception of disability itself, as there was no identical concept before modern times—is a by-product of capitalism. Capitalism spawns disability both as the primary producer of impairment (through industrial workplace accidents, the physical and . . .

END_OF_DOCUMENT_TOKEN_TO_BE_REPLACED

Joining Forces to be Stronger

When, shortly after the occupation of Zuccotti Park (Sep. 17, 2011), I started organizing disabled people to join in the new Occupy Wall Street movement, which seemed to be growing at the speed of light, I was criticized by leaders in the disability rights movement, including my good friend Bob Kafka, a national leader of ADAPT.

Beyond the Americans with Disabilities Act

In the United States and in other OECD countries, the majority of disabled people live in poverty.

Drawing on the work of scholars, advocates, and historians, I wrote this article (based on my October 4 talk at the disability rights forum) to examine the unpaid labor of persons with intellectual disabilities in institutional and community settings. In general, my PhD research, and this piece, are aimed at contributing to the literature that examine intellectual disability and work.

sponsored by New Politics, Radical Film and Lecture Series(RFLS),
and Campaign for peace and Democracy (CPD)

On October 26, 2011, legislation that would lower the wages of caregivers who provide personal assistance services to their disabled family members was ruled unconstitutional by a Minnesota judge.

Antonio Gramsci's South … or … Some Aspects of the Disability Question

When Antonio Gramsci gave his maiden speech in Parliament in May of 1925, many of the other deputies left their seats and thronged around him in order to hear the faint voice coming from his compressed chest.

Disability politics in a time of capitalist crisis: could history repeat itself?

A recent article in the British Observer by Ian Birrell discussed an ominous development that has historical connotations. “The demonization of the disabled is a sign of the times” outlined how more and more British disabled people are being increasingly subjected to bullying and hate crime.[1]

New York City plans to have even more inaccessible taxis