A Black, Working Class March on Washington: But We're Still Waiting for the Beginning of a New Movement

The Fiftieth Anniversary March on Washington for Jobs and Freedom on August 24 was a mostly African American working class event of tens of thousands. They came to celebrate the struggles and victories of a half century ago and to put on the agenda for today the issues of racial profiling and stand-your-ground laws, the country’s unemployment rate and growing economic inequality, and new restrictions on voting rights. Some of those on the dais before the magnificent Lincoln Monument, like Representative John Lewis, had spoken there in 1963, while others like Newark Mayor and New Jersey Senate candidate Cory Booker were, as he said, not even born then. Where fifty years ago the civil rights leaders had come to implore the Democratic Party politicians, at this march the Democratic Party politicians came to try to mobilize politically—and immobilize socially—their ever more discontented if still incredibly loyal base. 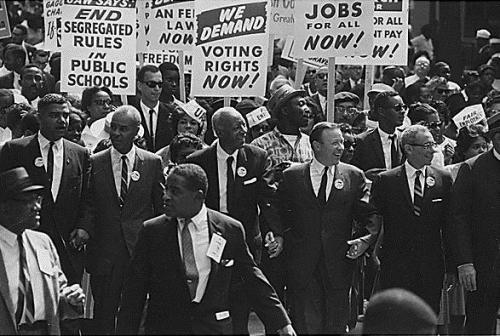 The presence on the platform of key figures of the Obama administration, such as Eric Holder, and of the leading Democrat in Congress, Nancy Pelosi, gave the event a quasi-official character in stark contrast to the 1963 march that maintained its distance from the administration by having no political or governmental speakers. While many in the crowd of the 50th anniversary march have good reasons for feeling frustration and anger about government policies and the state of the country, the tone of the event was one of pride in black struggles of the past and pleasure in being present with tens of thousands of others like ourselves who believe in a more democratic, just and decent society. The rally and march, however, did not create the impression that a new movement was being launched (as I had hoped it might; audio), though it did at least show that the unions and civil rights organizations still exist and can still march to the capital to petition for jobs and justice.

The words one saw most often and the most common image was Trayvon Martin, the young man’s whose death has made him the symbol of racial profiling and persecution, killed for no good reason, his killer set free by a system that simply cannot respond with justice to the murder of a young black man. Trayvon was everywhere, on caps and t-shirts, on placards and banners. Many of those present had no doubt participated in protests of the verdict of not guilty in the trial of Martin’s killer George Zimmerman or in protests against stop-and-frisk policies in New York, but those activists did not set the tone for the 50th anniversary march. 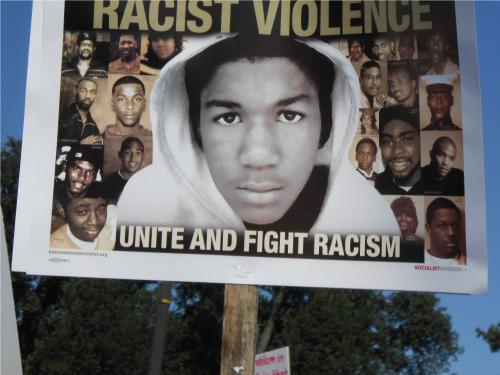 While there were clusters of militants here and there, the crowd had been brought to Washington by the labor unions and the African American civil rights organizations, such as the National Association for the Advancement of Colored People (NAACP) and the National Action Network (NAN) who place their hopes in the Democratic Party to solve their problems. Not surprisingly given the makeup of the crowd, there were no signs and banners criticizing President Barack Obama or  his policies. On the contrary, the crowd cheered loud and long for Nancy Pelosi, the Democratic Party’s House minority leader, herself a veteran of the 1963 march.  The union members who were there clearly took pride in following in the footsteps of those who came before, but one had little sense that they had come to open new paths to the Promised Land.

I have seldom been in a mass political demonstration of hundreds of thousands where one felt such fellowship and good will. This was more a picnic in the park than a protest against the powers. If there was no militancy in the rally and the march, there was a great sense of pride and common purpose: these were people who want the country to be better, are willing to work to make it so, and are prepared themselves to shoulder their portion of the burden, and more. Yet, in a certain sense, that was the problem. While people spoke out against racial injustice, there was no sense of a rejection of either the corporations or the government and its policies.. With the exception of small numbers of radicals and socialists, the march saw itself as influencing the system—not challenging it.

The left was present, of course. The Democratic Socialists of America (DSA) had endorsed it, and at the rally one saw banners of the Communist Party and the Socialist Party and a spirited march of a few hundred against the new Jim Crow led by the International Socialist Organization. While the ANSWER Coalition and the ISO had printed thousands of placards that one saw scattered throughout the crowd, those who carried them did so because they supported the slogan “Dr. King’s Legacy: Jobs not War” or “End Mass Incarceration and the New Jim Crow,” not because they supported socialism. We on the left were a drop in the bucket of the sea of black working people who continue to place their hopes on making the system work, rather than on the hope of creating a new system.

Yet all the problems remain, not only the injustice of the justice system, but also the continuing economic problems of high unemployment and growing inequality as well as the attack on voting rights. Health care remains an issue, for Obama Care (never really what we needed) has not yet come and will not come to many states; the public schools and teachers remain under attack; the immigration issue remains unresolved; and everywhere American working people face the government’s austerity program, cutting public services and public employees. The military interventions continue and threaten to expand and the national security state continues to grow, eavesdropping on millions. The Democrats on the dais stand on the wrong side of almost all of these issues, their only real concern to protect voting rights because the Republican attack on their voters endangers their political positions.

This massive March for Jobs and Justice fifty years later was a missed opportunity  to launch the movement we so badly need. Yet we can count on the irrationality of the economic system, the unfairness of the political system, and the continuing desire for justice on the part of all of those walked in Washington to give us one more chance. Let it be soon, for every day that passes there is another Trayvon somewhere, another foreclosure, another unemployed worker, another homeless family on the street. Let it be soon, and when it comes, let it be powerful and “Let justice roll on like a river, righteousness like a never-failing stream!”

Posted August 26, 2013 Racism, United States by Dan La Botz
About Author
DAN LA BOTZ is a Brooklyn-based teacher, writer and activist. He is a co-editor of New Politics.