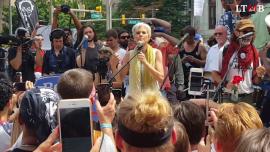 For three days the wounded and defeated soldiers of Bernie Sanders’ army, tired and disappointed but still idealistic and hopeful, marched and picketed around the convention center in Philadelphia, while inside many of Sanders’ delegates booed Hillary Clinton’s name every time it was mentioned. Though they had lost a battle in the struggle for the political revolution Sanders’ soldiers thought, hoped, dreamed that they might still somehow continue and ultimately win the war.

Inside the hall the party pressured them to turn coat, while outside the media largely ignored them. For a year they had marched proudly, fought bravely, and won many to their cause. Now they seemed in danger of being reduced to a scraggly band of survivors, lamed, wounded, and weary, limping away.

Women like Deb and Dana, whom I met on a trolley, had come from as far as Washington State simply to protest against the Democratic Party’s unfair treatment of their candidate, their hero. Wikileaks’ release of Democratic Party chairwoman Debbie Wasserman Schultz’s emails, proving that she had worked to sabotage the Sanders’ campaign confirmed their suspicions and infuriated them. “And then Clinton hires her,” said one of them.

Two young men from Texas told me there was no way they would vote for Hillary Clinton who represented all that they detested in the Democratic Party. Thousands of others—identifying with Occupy Wall Street, the environmental movement, and Black Lives Matter—joined a series of protest marches, sweating, swiping their brows in the 95-degree heat. When the marches ended, the protestors spread out all over downtown Philadelphia, little bands of marauders, sniping at the Clinton forces.

They had seen Bernie as their champion, and some still did, but they would not follow him in his endorsement of Hillary. Asking them to do was like asking a Union soldier to put on a Confederate uniform: it violated both their sense of loyalty to a cause and their ideals. They would not do it. Though the general had gone home, his army marched on. Where would it go?

The Search for a Future

A series of left events in Philadelphia strove to provide an alternative. Veterans of Occupy convened the People’s Convention at the Arch Street Meeting House. But only a couple hundred of the people showed up to attend the short sessions where with little time for adequate discussion they adopted proposed progressive amendments to the U.S. Constitution.

Several socialist organizations joined together to create the Socialist Convergence at the American Friends Service Committee hall, which during its first couple of days organized a series of interesting panels on issues such as feminism and racism, attended mostly by the socialist groups that had organized the event.

Then suddenly last night at the Socialist Convergence things changed. The hall began to fill with 700 veterans of the Sanders army, among them more than two dozen Sanders delegates to the Democratic Party Convention. There were some illustrious speakers such as journalist Chris Hedges, editor of Jacobin Bhaskar Sunkara and activist Steve Williams of LeftRoots. (Kshama Sawant, who supported Sanders and then urged him to continue his campaign as an independent or a Green, would have been there had she not had a city council meeting back in Seattle.)

Much of the crowd was unhappy when Hedges in a typically moralistic and off-target talk focused his fire on Sanders instead of Hillary, and they let him know it. When Lev Hirschhorn, a Philadelphia labor and community organizer and Bernie backer, argued for supporting Hillary as the lesser-evil and making a protracted fight inside the Democratic Party he was booed. The crowd wasn’t looking for critics, it was looking for a leader to continue the political revolution—and they found one.

Presidential candidate Jill Stein of the Green Party stood to talk, stating that, “I find Hillary Clinton’s record every bit as terrifying as Donald Trump’s [proposals],” the crowd roared. “I agree with many of you, with most of you, that we should not be intimidated out of our power. We can change our voting system. Why are we locked into a voting system that tries to compel us to vote against what we fear, rather than for what we believe?”

In one of the strongest speeches I have heard her give, she encouraged the audience to build an independent political movement and to do so through her campaign, as she laid out her Green Party platform, not so different from Sanders. The 700 people in the hall stood and shouted throughout her speech, giving her multiple standing ovations.

While 700 people may not sound like many, think about the 500 Black Lives Matter activists who went to Ferguson, Missouri in solidarity with Michael Brown, and returned to cities and towns throughout the country to build the national movement that mobilized hundreds of thousands. Bernie’s army is on the march again; having stripped the Democratic Donkey insignia from their sleeves, they have found a new general: Jill Stein.

Posted July 28, 2016 Electoral Politics, United States by Dan La Botz
About Author
DAN LA BOTZ is a Brooklyn-based teacher, writer and activist. He is a co-editor of New Politics.