A Call to Action: Walk Out from the Democratic National Convention! 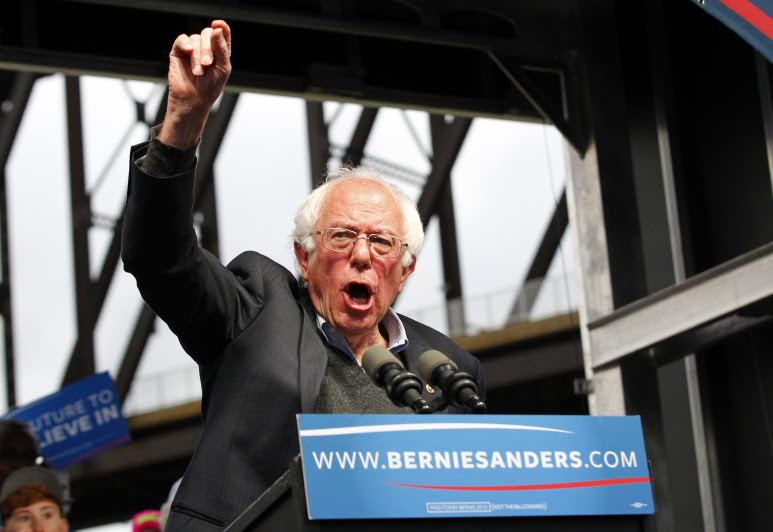 A serious and wide-ranging debate has been taking place among Sandernistas in the two weeks since Bernie endorsed Hillary. And now with the Democratic Convention underway, the unresolved questions become more pressing by the day.

The central issue is whether we should follow Bernie’s lead in supporting Hillary’s corporate politics, or continue the political revolution by building our movement independent of the DNC. While I supported Bernie’s primary campaign, spoke at Bernie rallies, and initiated Movement4Bernie, I believe we simply cannot follow him in his decision to back Hillary. Our political revolution now risks being turned into its opposite, and funnelled into support for the DNC’s neoliberal agenda.

Backing corrupt establishment politicians is no way to defeat the right-wing – it will only embolden them and allow the political agenda to continue to be pushed further rightward. This failed strategy of lesser evilism is what has brought the 99% to this point. And now genuine outrage at the corporate politics of the establishment has allowed a right-wing populist within striking distance of the presidency.

We cannot continue down this dead end.

As Clinton’s choice of Tim Kaine for her running mate shows, she and the DNC have not in any significant way been “pushed to the left” over the course of the primary, in spite of some limited concessions being made with the non-binding platform and in minor reforms to superdelegate rules.

With Kaine, Clinton has chosen her neoliberal political twin, and earned Wall Street’s emphatic seal of approval. As if to underscore the political meaning of her VP choice, and perhaps as a signal to Corporate America, in the days before the announcement Kaine made clear his full commitment to both the Trans Pacific Partnership (TPP) and to further bank deregulation. And now Donald Trump is set to use both Clinton’s and Kaine’s pro-corporate, “free trade,” anti-worker policies against them in the general election – and in this the Democratic ticket has provided him a near perfect target.

Meanwhile, Wikileaks’ exposure of the DNC has made crystal clear how rigged the (un)Democratic primary was from start to finish, with thousands of emails showing the absolute non-neutrality of a corrupt party leadership who made the primary into utterly hostile terrain for the democratic socialist challenger.

The leaks also completely exposed the hypocrisy of the Democratic Party leadership, which claims that its key priority is to defeat Trump. Yet they have fiercely and undemocratically backed Clinton in spite of the fact that the polls have shown Sanders to be the far stronger candidate in every matchup.

With the attention of the country and world focused on Philadelphia we now have some serious choices to make, as well as some powerful opportunities. The actions of Bernie delegates and activists both inside and outside the convention have the potential to make history this week.

Thousands are joining protests and rallies on the streets of Philadelphia. There are also many protest actions taking place inside the convention such as the tremendous anti-TPP action that took place yesterday, which temporarily halted the proceedings.

But the most powerful protest of all will be for delegates and activists to reject the neoliberal Democratic establishment altogether, and walk out of the convention in the largest possible numbers later this week.

Delegates have been organizing for just such a walkout action, and there is the potential for several hundred delegates to collectively walk out. This will take real courage. The convention is a huge, scripted spectacle with a carefully chosen procession of Democratic nobility, including people like Michelle Obama and Elizabeth Warren. But this year, perhaps in recognition of the political uprising that has taken place, the Democratic leadership has gone so far as to give the event a populist veneer, with some workers and activists also speaking. The scale and intimidating character of the 50,000 person event will no doubt have a psychological impact.

But for those who do take the bold step of walking out on the DNC and its neoliberal politics, there will be a rally with media, livestreamers, and fellow activists ready to greet them on the other side of the walls of the so-called “free speech zone.” Mass media have already been contacting Movement4Bernie in anticipation of the event. I hope I will see you there.

Delegates have had to organize underground, with a campaign of fear by party leaders being directed at any delegates advocating for strong protest actions or third party candidates, with the specific threat of having their delegate status revoked (called “de-credentialing”). But last week the organizing came above ground to some degree, with Occupy Wall Street coming out in favor of the walkout on their Facebook page and in Twitter, along with Bernie or Bust and Movement4Bernie. For updates on the walkout action you should follow all three twitter feeds. To help out, see the Q&A created by the organizers.

One of the most common arguments being made against the walkout is that delegates will somehow abandon their chance to fight for Bernie’s politics and lose their voice by leaving. But the walkout will happen well after the platform and nomination votes are over. After the nomination roll call, the convention becomes ever more purely ceremonial, undemocratic, and scripted: The Hillary Show™

As genuine reactions to the horror show of last week’s Republican National Convention already suggest, fear of Donald Trump will drive many votes in November. The danger of right-wing populism is all too real, but also for that reason it would be completely counterproductive to support Clinton and the DNC.

Over the past decades, effectively unchallenged by the left, the Democratic establishment has joined the Republicans in carrying out the neoliberal project, differing more in degree than direction.

If the 99% continues to support neoliberal politicians on a lesser-evil basis, it will only create more space for right-wing populism, as we have seen in other countries. This year, failure to stand up to the DNC would mean the anti-establishment space would be thrown wide open to right-wing candidates like Donald Trump and Libertarian Gary Johnson. Already, Johnson has received 9% in some polls. This would be a disaster, and millions of anti-establishment votes for Trump and Johnson could help create an ongoing base for right-populism and potential for a new right-wing party, like the National Front in France. The danger was already shown after 2009 by the rise of the Tea Party, when the right exploited the genuine fury at the Wall Street bailouts to build a new political force, while the left was busy making excuses for Obama.

We absolutely need to defeat the right but this requires a serious strategy. To succeed we will need to build the strongest possible movements completely independent of both parties of Wall Street. We will need to build our own mass political party of the 99%, that will work alongside those movements, rather than against them. Concretely, right now, we need to build the broadest possible support for Green Party Candidate Jill Stein, whose campaign is the clear continuation of our political revolution.

A new mass party of the 99% will need to reject all corporate money and influence, and fight unambiguously for our interests. This is what Bernie began to do in the primary, and it is why he had broad and genuine appeal not only for Democratic voters, but also for independents and even some Republicans. There is no “secret” as to why he fares much better in the polls against Trump than Hillary does. Hillary’s support for “free trade,” pro-corporate, anti-worker policies is clear for all to see. Bernie was able to bring a historic challenge to the DNC, despite all the undemocratic attacks on his campaign, precisely because he called for a political revolution against the billionaire class, advocated for bold policies in the interests of the 99%, and welcomed Wall Street’s contempt.

Unfortunately, Bernie has now walked out on that strategy, and called for a vote for the very establishment we have been fighting against.

Now it is left to us. To win the things we have been fighting for, our movement will need to stand on its own feet, go beyond Bernie, and begin laying the basis to build our own party, a mass party of the 99%.

And to do this we cannot afford to let moments like this one pass us by. A walkout of hundreds of delegates from the convention, combined with the mass protests already happening on the streets of Philadelphia, will be a bold stand pointing towards political independence for working people and youth.

Enough is enough. Join me in supporting the brave delegates walking out on this rigged process and the (un)Democratic National Convention.

Kshama Sawant is a Seattle City Councilwoman and member of Socialist Alternative.