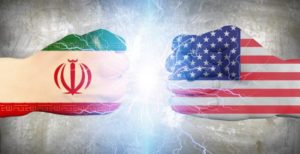 Clearly the attacks on Norwegian and Japanese tankers off the Gulf of Oman on Thursday 14 June increase the risk of a miscalculation leading to military clashes in the region. However, these attacks were probably not carried out by any of the Iranian regime’s armed forces, not even the Pasdaran or a section of the Pasdaran (though that can’t be completely ruled out).

In order to assess them correctly we shouldn’t just zoom in on their level of sophistication but also follow up other factors, especially their political and diplomatic purpose. We have to ask: “Which state is going to benefit from delaying, or maybe even preventing, a deal?” That state is not the Iranian regime but one (or more) of US imperialism’s local allies. A regional power like Israel (although others can’t be ruled out) is probably behind them.

Given the economic and social situation, it is highly unlikely that the Iranian regime would do this — no matter what US Secretary of State Mike Pompeo asserts. The attacks justify US imperialism sending even more troops to the region, including an extra 1000 soldiers announced earlier this week. They also justify the $110 billion arms deal with Saudi Arabia and support for its military intervention in Yemen; building new Israeli settlements like Trump Heights in the Golan and carving up more of the West Bank; and repression by all US allies (like Egypt) in the region. The rising tension also keeps the price of oil above $60 a barrel, which helps not only the profits of the big oil companies but also of all sectors involved in facilitating this industry, like shipping, insurance and others.

The main thing to remember is that the media excitement and focus on the military aspect of US imperialism’s relationship with the Iranian regime ignores the long-standing back-channels of diplomacy and mutually beneficial economic concessions — including, for example, allowing Iraq to import Iranian gas for another three months, the IMF delegation that went to Iran a few weeks ago, and so on.

The economic pressure on the Iranian regime is constantly rising and the level of mass discontent, particularly among workers, keeps going up. Oil production has fallen below 227,000 barrels a month, the economy shrank by 4.9% last (Iranian) year, production of domestic appliances is at 25-30% of capacity, and so on.

Following the repression of Haft Tappeh and other strikes, and the May Day arrests, there was a lull in strikes and protests. But these are picking up again, particularly by the Pensioners’ Unity Group, who will be demonstrating in front of the regime’s parliament on 18 June. They have had solidarity messages from teachers, Haft Tappeh workers, Vahed bus drivers and so on. It is important to step up our solidarity work, not only supporting workers’ struggles, but also campaigning for the release of all political prisoners and jailed workers in Iran. Especially those involved in the Haft Tappeh Sugar Cane workers’ strike, like Esmail Bakhshi and Sepideh Gholian.