"Alive As You And Me": The Songs of Joe Hill 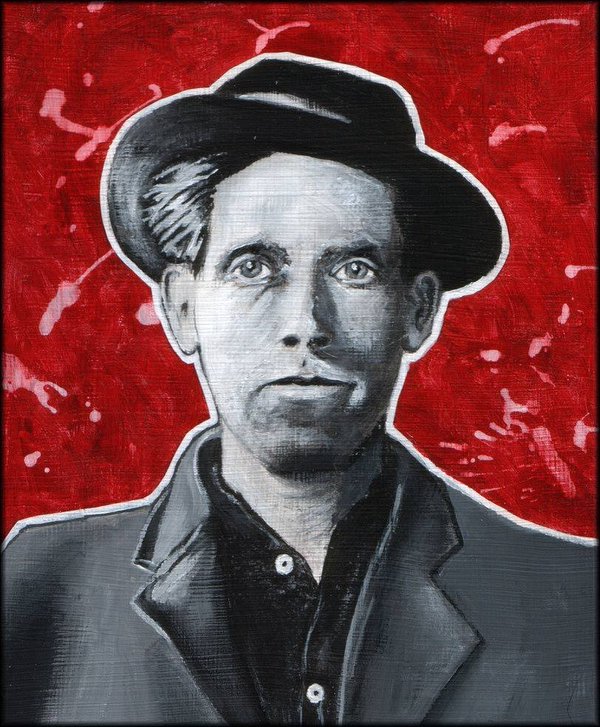 Almost a century ago, the socialist journalist John Reed wrote of the Industrial Workers of the World, popularly known as the Wobblies, “Remember, this is the only American working-class movement which sings.  Tremble then at the IWW, for a singing movement is not to be beaten.”  On the other hand, the sheriff of San Diego complained of his jails filled with Wobblies, “I do not know what to do.  I cannot punish them.  Listen to them singing all the time, and yelling and hollering, and telling the jailers to quit work and join the union.”

Joe Hill stood foremost among Wobbly songwriters, composing songs to be sung on soapboxes, picket lines or in jail.  And one hundred years ago this November, the forces of capital and the state of Utah executed him.

Chicago musician and scholar Bucky Halker is honoring the centennial with a CD of new interpretations of Hill’s music, Anywhere But Utah—The Songs of Joe Hill (Revolting Records, available online at CD Baby), taking his title from Hill’s dying wish that his remains be transported out of state because he didn’t want “to be found dead in Utah.”  “I wanted to make a record that Hill would like,” Halker says.  “That was my priority from the beginning.  I don’t think he’d like a straight folk revival, strumming acoustic guitar approach, as that has nothing to do with most of his material.  He played the piano and the fiddle, after all.  The folk revivalists did a great service by keeping Hill’s work in circulation, but trying to keep him in that small musical box is way off the mark.  So, I borrowed from vaudeville and the music hall, piano blues and early jazz, alt-country, swing, punk, and gospel.”

Born Joel Hagglund in Sweden in 1879, Hill immigrated to the United States in 1902, changing his name to Joseph Hillstrom, which would eventually be shortened to Joe Hill.  As a Wobbly, Hill was active in a free speech fights in Fresno and San Diego, a strike of railroad construction workers in British Columbia, and fought in a revolution in Mexico.  In 1914, Hill was arrested in Salt Lake City and charged with killing a storekeeper, allegedly in a botched robbery.  The evidence was thin, but the prosecutor urged conviction as much on the basis of Hill’s IWW membership as his involvement in the crime.  An international amnesty movement pressed for a new trial, but the Utah governor refused and Hill was executed by firing squad on November 19, 1915.  In a final message to IWW General Secretary Bill Haywood, Hill urged, “Don’t waste any time in mourning—organize.”

Hill’s life, death and music have continued to inspire.  As Wobbly historians Dean Nolan and Fred Thompson have written, “There is that about Joe Hill that has endeared him to union people around the world, including many who know they might have quite an argument with Joe if they could meet.  These many expressions of regard … have developed largely outside of Hill’s union.  Hill’s persistence as an enduring symbol is thus not some artifice maintained by a handful, but part of the process … through which the working class shapes its hopes and values.  Hill has become an industrial William Tell.”  In the words of the Alfred Hayes-Earl Robinson song “I Dreamed I Saw Joe Hill,” “where workingmen are out on strike, Joe Hill is at their side.”

In Halker’s view, “music was a centerpiece of the Wobbly movement culture.  The IWW cleverly used singing and chanting as a way to garner attention from workers, the media, and the authorities.  Fifty workers singing makes a lot more noise at a rally or in a jail cell than one speaker on a soapbox or one person ranting in the joint.  Singing jailbirds can make a big ruckus, one that the taxpayers and authorities discovered early on.”

Hill’s mastery of American vernacular is especially impressive given that English was not his primary language.  As Halker comments, “his work is filled with humor, irony and sarcasm, hardly easy skills to gain in your second language.  No doubt he picked all this up from hobos, labor activists, and Wobblies, but I also believe his ear for music helped him in this effort.  You can tell from his lyrics that he paid close attention to the music-hall and Tin Pan Alley writers of the day.  Most of them were also immigrants or children of immigrants and were very skilled at slang, lyrical twists, and clever use of idioms.”

Hill’s lyrics remain timely, addressing issues of unemployment, police brutality, feminism and militarism.  “Stung Right,” for instance, “represents the strong anti-military bent of the IWW, even before the outbreak of WWI,” Halker says.  “Many immigrant workers came from regions of the world where they were drafted and made to fight the battles for ruling class aristocrats and capitalists and were determined to stay out of future frays of that sort.  What’s more, many working-class groups saw war as a senseless ruling class fight that only pitted workers against each other.  Nationalism was suspect.  Little wonder, then, that after the Spanish-American War in 1898, and the needless slaughter that entailed, anti-war and anti-military sentiments found welcome ears.  Hill was aware that workers also signed up with the military when their economic situations were difficult.  At least they gave you a bit of cash and some food in the army.  In this piece, he’s warning workers not to fall for it.  It’s noteworthy as well that he mentions the contaminated rations in the final verse. During the Spanish-American War the big meat packers like Swift and Armour made boatloads of profits from their contracts to deliver rations to the troops.  In their efforts to maximize profits they often included contaminated and chemically-laced foods that made workers very sick and killed more troops than the ‘enemy’ ever did with guns and bayonets.  I think it’s one of Hill’s best efforts.”

Similarly, “The Preacher and the Slave” speaks to our world of television evangelists.

The Starvation Army they play,
They sing and they clap and they pray.
Till they get all your coin on the drum,
Then they’ll tell you when you’re on the bum:
You will eat, bye and bye,
In that glorious land above the sky;
Work and pray, live on hay,
You’ll get pie in the sky when you die.

Hill often used the tunes of hymns of popular songs for his parodies, Halker says.  “Since hymns were well known, even across sectarian religious (and political) lines, hymn tunes were often used by labor songwriters going back to the mid-nineteenth century.  In that regard, Hill’s use of ‘In the Sweet By and By’ as the tune for ‘The Preacher and the Slave’ was very much in a labor tradition, as was ‘Nearer My God to Thee’ for his ‘Nearer My Job to Thee.’”

The CD also contains some surprising obscurities, like the wistfully romantic “Come and Take a Joy-Ride in My Aeroplane,” which represents the power of dreaming as a weapon against capitalist miserabilism.  “Frankly, I think historians and musicians have missed the boat in not addressing this romantic impulse,” Halker comments.  “I suppose it seems counter to our image of the left-wing radical and revolutionary, at least for most observers.  But hell, I’d rather hang out with a person with strong romantic tendencies and a left-wing leaning personality, than some dour old sourpuss like Marx or Lenin, wouldn’t you?  Also, I think within the IWW there was a strong sense of romance about the world.  This can be found clearly in Wobbly writers like Haywire Mac or Ralph Chaplin.  Some of this could be channeled toward a utopian impulse, as in the classic IWW song ‘Big Rock Candy Mountain.’”

Halker continues, “I think Hill and other Wobbly bards and writers should get some credit for their use of sarcasm and irony in the development of American literature.   They had sharp wits and tongues that worked deftly and at great speed, something which only pissed off the lunkhead bosses, the law, and the ruling elite even more.  The authorities and their lackeys dislike radicals and they really hate them when they’re much smarter than they are.”