After Greece, Puerto Rico: Another Crisis Created by Capitalism

On Monday June 29, the Governor of Puerto Rico, Alejandro García Padilla, delivered a live message to the people of Puerto Rico stating that the government’s $73 billion debt is unpayable. The governor stated, “The public debt, considering the present level of economic activity, is unpayable”.

Several analysts in the corporate media, and also on the liberal left who are not very familiar with Puerto Rico, have stated that his message came as a shock to the country. This is not true. Articles and editorials in El Nuevo Día, El Vocero and Primera Hora, the country’s three major newspapers as well as television and radio broadcasts in the days subsequent to the Governor’s message express the general consensus that the people of Puerto Rico were not surprised by his words.

What did shock many was the payment of almost $1 billion two days later to pay off debt fees. An article in El Vocero July 3 goes into this matter.

This is a fabricated crisis.

The colonial government of Puerto Rico is simply bowing to the demands of international financial forces which, like in Greece, have been demanding that taxes on working people be increased, that the labor rights enjoyed by some be eliminated and that remaining productive sectors still in hands of the government be privatized.

Since the privatization of the Puerto Rico Telephone Company in 1998, the people of Puerto Rico and in particular the working class have been resisting countless efforts by the two ruling political parties, the Popular Democratic Party and the New Progressive Party, to eliminate labor and democratic rights in order to tighten the screws of neoliberal economic policy and maintain wealth accumulation for a small predator elite.

Similar to the Greek peoples’ long struggle against austerity, two years ago teachers and other public sector workers and supporters occupied the Legislature building of Puerto Rico in response to the government’s decision to reduce the benefits for retirees. Videos and pictures of the dramatic takeover electrified the country as an example of popular resistance and indignation (see picture).

Instead of supporting the people, Governor Padilla has been telling the country that the way to solve this crisis is to implement the recommendations in the Krueger Report, developed by a group of economists headed by Ann Kruger, a former bureaucrat for the IMF (the International Monetary Fund) the same financial institution that the Greek people rejected in their recent NO vote.

This Report proposes that Puerto Rico:

In addition, the July 11 edition of El Nuevo Día says it has confidential information that the government intends to fire public sector employees. The previous governor already fired 20,000 workers.

As evidence of the preference by elites to attack workers via "disaster capitalism" and Puerto Rico's inability to remedy its economy due to its lack of sovereign power, the colonial governor said, as quoted by El Vocero on July 3: “We will not get Puerto Rico out of this mess by taking sun on the beach.” With these words he was referring to his intention of reducing the number of vacation days won by public sector unions. However, regarding the corporate sector he has a different tone, putting forward a plan to grant multinational corporations even more tax breaks.

This is what capitalism is, a plan of attack by Wall Street, by the hedge fund investors who profit off these debts and the misery they cause and by the international capitalist financial institutions like the IMF and the World Bank to dominate the economies of many countries thru imperialist debt.

In his book, Confessions of an Economic Hitman, John Perkins states: “Economic hit men (EHMs) are highly paid professionals who cheat countries around the globe out of trillions of dollars. They funnel money from the World Bank, the U.S. Agency for International Development (USAID), and other foreign ‘aid’ organizations into the coffers of huge corporations and the pockets of a few wealthy families who control the planet's natural resources. Their tools included fraudulent financial reports, rigged elections, payoffs, extortion, sex, and murder. They play a game as old as empire, but one that has taken on new and terrifying dimensions during this time of globalization."

He explains in detail that the goal of these hitmen is to first sink countries in debt. Then since the debt is not payable, the international loan agencies takeover and privatize a country’s public sectors and are also granted access to mineral deposits and given other corporate incentives or privileges.

In a nutshell, that is what Wall Street, the banks and international finance institutions are attempting to implement in Puerto Rico. But our fight has just begun! 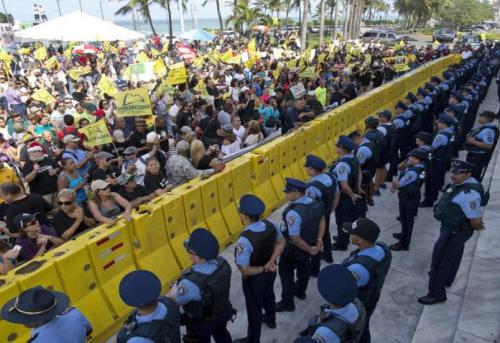 Last week several labor leaders met with the governor. After the meeting, Pedro Maymi, President of the Puerto Rican Workers Central Union, declared that they have already given back all that they can. The new President of the Teachers Federation Mercedes Martínez urged teachers to prepare for a renewed fight against the privatization of schools in August.

In the long run however, Puerto Rico, which was invaded by the USA in 1898, must break the chains of colonial capitalism. Puerto Rico is covered with shopping malls and fast-food chains. These corporations make more than $60 billion annually in profits and pay no taxes, unlike its low-wage workers who, contrary to capitalist myth, pay many local and sales taxes (just not federal).

These corporations also receive many government subsidies. Capitalism makes billions in profits from the colonial status of Puerto Rico. That is why Puerto Rico is a colony of the USA: to transfer wealth from the people to the capitalists. This is why Puerto Rico needs independence.

We believe resistance is the only solution. Only a militant and united fight back against the international capitalist gangsters who prefer profits instead of democracy can stop this corporate offensive against people and the planet. We therefore urge solidarity among all working people.

We support the Greek and Black Lives Matter movements for dignity and life.

We will not pay. We will fight. #PuertoRicoDignityoverDebt

One comment on “After Greece, Puerto Rico: Another Crisis Created by Capitalism”