After Dallas: The Struggle Continues 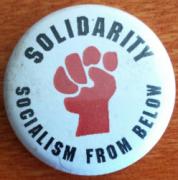 Statement of the Steering Committee of Solidarity, July 8, 2016

Last night, during a Black Lives Matter protest in Dallas called in response to the killings of Alton Sterling and Philandro Castile, one or more snipers shot at least a dozen police officers. As of now, five are dead, as is at least one suspect in the shooting. Before his death in a standoff with police, the suspect indicated that he was upset with police shootings and with Black Lives Matter, and that he wanted to kill white people. He said he was working alone, and has no connection to Black Lives Matter or any other organized group. Our comrades in Dallas report that protesters were just as surprised and frightened as the police when the shooting started, and at least one protester was shot.

Despite the increasingly clear lack of connection between the vigilante shooter(s) and organized protest activity, this tragedy will almost certainly lead to increased repression against Black Lives Matter and other Black political organizations in Dallas and around the country, as well as popular racist backlash. Right wing pundits are already issuing thinly veiled calls for retaliation. Likely, Dallas will become a popular excuse to call for a hiatus from protest.

We face a difficult period ahead, and now more than ever must remain vigilant and committed to struggle. We must continue to be in the streets and to demand justice. Black liberation remains central to all liberation, and Black Lives Matter as an organization and a movement needs the support of everyone committed to the fight for a better world. We urge all activists and revolutionaries to maintain or increase our engagement in this fight, and to be prepared to defend those targeted by backlash and repression.