The Democratic Wager: why the Left must support the Syrian Revolution 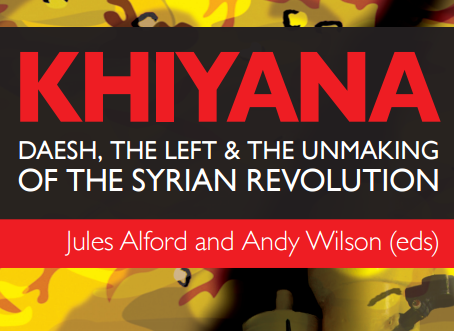 The title of this book means “betrayal”: this is an angry book, and is designed to provoke. The articles collected set out the case against the majority of the international left for its failure to support the Syrian Revolution at best, and active support for counterrevolution at worst. The authors seek to explain the reasons for this betrayal, and to skewer the myths that have justified it.

Mark Boothroyd takes on myths about the Syrian armed resistance. When Cameron made the case for British military intervention against Daesh (ISIS) in autumn 2015, he was mocked for claiming there were 70,000 “moderate” fighters on the ground ready to support the intervention. Precisely the wrong part of Cameron’s claim was attacked. Rather than exposing Cameron’s lie that the Syrian rebels welcomed any imperialist carve-up that would leave Assad in place, most critics replicated Putin’s lie that all of the Syrian rebels are al-Qaeda or Daesh. Mark demolishes both lies in forensic detail.

Equally painstaking is the delineation of the origins, ideology and material basis of Daesh. Contrary to the conspiracy theories, Saudi Arabia does not fund Daesh: Sam Charles Hamad demonstrates why the ideological kinship between the Gulf state and the new proto-state actually underpins their “irreconcilable antagonisms”. The driving force for Daesh is instead located in the sectarian mass murder carried out by the Assad regime, Iran and Russia, while the Syrian rebels are identified as the only force capable of tackling Daesh or its actual cause.

A series of articles aid understanding of the form the counter-revolution has taken. Javaad Alipoor argues that internal contradictions within Khomeinism have been turned outwards through Iran’s sustained and brutal intervention in Syria. Budour Hassan demonstrates why the international Palestinian solidarity movement must break with any support for Hezbollah or Assad. Michael Karadjis and Eyal Zisser analyse the class dynamics within Syria that have determined the changing composition of the Ba‘athist regime and its antagonists.

So how did the left manage to get this so wrong? Sam Charles Hamad’s answer invokes Marx: “the ideology of the ruling classes is at all times the ruling ideology”. Critics of US and UK imperialism have often reproduced Islamophobic “war on terror” tropes about the opposition to Assad in Syria.  The obsession with the idea that the US seeks “regime change” in Syria has lined up many “anti-imperialists” on the side of the status quo actively supported by Russian and Iranian imperialists and tacitly supported by US and UK imperialists. Too often the left are impressed by the way regimes or parties describe themselves: Leila al-Shami and Shiar Neyo critique the way the Kurdish Democratic Union Party (PYD) has been romanticised, leading to selective solidarity that obscures the common struggle of Syrian Kurds and Arabs in Kobane.

Can the left redeem itself? The introduction to this book urge socialists to take the “democratic wager”. The Syrian Revolution is placed in the context of a wave of uprisings for democracy, beginning with the Green Movement in Iran. The authors analyse how neoliberalism has shaped the class dynamics and political character of these uprisings, and follow Neil Davidson in arguing Trotsky’s concept of “permanent revolution” is now obsolete. If the left wishes to be given any hearing, it must “grasp that between democracy and dictatorship it always sides with democracy”: there are harsh words here for those who misinterpreted the 3 July coup that overthrew Morsi’s democratically elected government in Egypt.

The catalogue of betrayals by left intellectuals, journalists and anti-war organisations itemised here is dispiriting. As Louis Proyect puts it, “It’s a tragedy for the left that so many who came of age in the 1960s like Tariq Ali cannot understand how much the Vietnamese peasant and his Syrian brothers and sisters today have in common.” Through their anger, the authors of this book offer a persuasive account of how this betrayal came about and a demolition of the falsehoods that sustain it.

Meanwhile, for those provoked to take the democratic wager, Robin Yassin-Kassab and Leila al-Shami’s Burning Country: Syrians in Revolution (2016) is an excellent place to learn more about the inspiring examples of self-organisation from below thrown up by the Syrian Revolution.

Khiyana includes a longer version of Mark Boothroyd’s article The Syrian Revolution and the Crisis of the Anti-War Movement, which was originally published at: https://rs21.org.uk/2015/09/10/the-syrian-revolution-and-the-crisis-of-the-anti-war-movement/