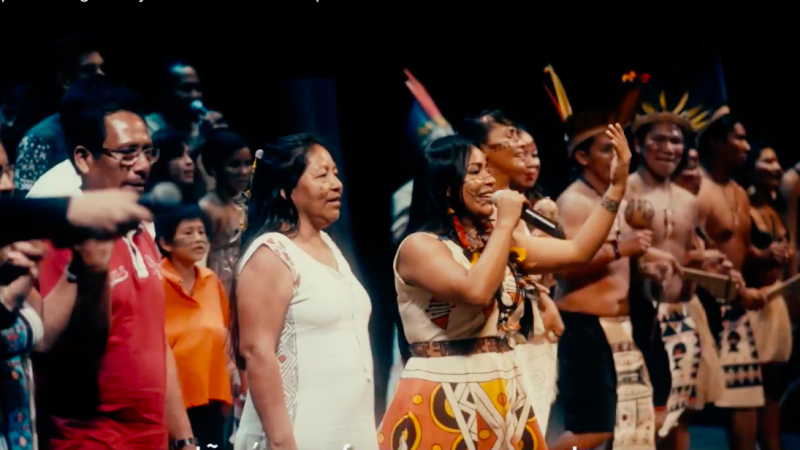 On 23 August, Djuena Tikuna [2] became the first indigenous singer to perform on the stage of the Teatro Amazonas [3] (“Amazonas Theatre”) — a bastion of European culture in the middle of the world’s largest tropical forest.

The 32-year-old artist produced and starred in the launch of her work Tchautchiüãne, or ‘my village’ in the Tikuna language. The album was inspired by the Amazonian rubber boom [4], which saw the massive exploitation of the region’s rubber trees — and the region’s people — beginning at the turn of the 20th century.

The state of Amazonas [5] has one of the largest indigenous populations, making up around 17% [6] of the 896,000 indigenous people currently live in Brazil.

Her lyrics are full of activist spirit; they speak of matters dear to her community, such as the environment and the demarcation of lands. More importantly, she sings in the Tikuna language, which, for her [7], is a political choice:

Some peoples no longer speak their language. Can you imagine if I sang in Portuguese? The youth who are watching me will want to imitate me. Even in the city, we have to keep our language and identity.

To understand what her show means for Brazil’s indigenous peoples, it is useful to look at the history of the Teatro Amazonas itself.

The building, in central Manaus [8], the capital of Amazonas state, was designed by the Portuguese Institute of Engineering and Architecture of Lisbon and inaugurated in 1896, at the peak of rubber exploitation in the region.

In an era when the automobile industry was taking its first steps, the discovery of extracting rubber from the seringueira [9] trees — commonly found in the Amazon — proved to be an extremely lucrative business, and attracted hordes of investors, adventurers, and workers from other parts of Brazil.

The industry used indigenous techniques to extract natural rubber from the trees, and the wealth it generated turned the state capitals of northern Brazil into some of the country’s richest. As a show of this new wealth, the local elite proposed and financed the construction of the Teatro Amazonas — a project which was actually built by indigenous workers.

The conversion of many indigenous people into poor workers was not the only damage done by the rubber boom; this period was characterized by the mass expulsion of various tribes from their lands.

121 years has passed since indigenous workers built the Teatro Amazonas, and for the first time, an indigenous performer took to the stage of one of that era’s most important landmarks.

When still a child, Djuena left the village and went to live in Manaus. In a piece reported by the website Jornalistas Livres, she says the idea to take her show to the Teatro Amazonas came from a question she asked herself: “Why can’t I sing there? Because I’m indigenous?”

When I sang on the stage of the Teatro Amazonas with them, and we beat our feet, it is a way of me saying: we are here, kinsmen. You suffered because of this building, but we are here, we will continue fighting here and resisting here.

The video ends with calls of “Demarcação já!” (“[Land] demarcation now!”) which is part of campaigns [10] — including a protest song [11] released by artists earlier this year — to defend remaining indigenous lands by ensuring full legal recognition, an issue which has been further weakened under Brazil’s current president Michel Temer’s[12] government.