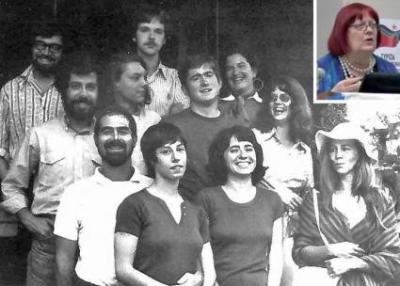 In her nearly 60 years as part of the socialist movement, Joanne was the most principled of activists and intellectuals. She had the rare combination of the sharpest intelligence and the highest degree of empathy, both for her fellow socialists and activists, as well as for those struggling around the world.

At the time she announced her cancer diagnosis last year, at a celebration for her life this past June, and in her last days in the hospice, the international outpouring of love and comradeship for Joanne was both remarkable and entirely understandable, given her personal and political impact on so many people and around so many issues.

JOANNE WAS born in Chicago in 1941. Her father was Jewish and had fled Nazi Germany, where he had trained as a lawyer. In the U.S., he became a librarian and the director of the library at the then-Chicago Teachers College/Wilson Junior College (now Chicago State University). Her mother was a Unitarian and a liberal activist, including in the fight for integrated schools.

As a teenager, Joanne was a self-described pacifist, having attended workshops of the American Friends Service Committee. Just shy of 16 years old, she enrolled at the University of Chicago, where she joined the Young Peoples Socialist League (YPSL) in 1958.

She was recruited by Deborah Meier, who was part of the wing of the Trotskyist movement led by Max Shachtman. In 1957, Shachtman's Independent Socialist League had joined the Socialist Party and its youth group, the YPSL.

By the early 1960s, a split had developed in the Shachtman group between a right wing and a left wing. The right wing, led by Shachtman, had turned to supporting the Democratic Party and its imperialist foreign policy–including the Bay of Pigs invasion of Cuba.

But it was the principled politics of Shachtmanite left-wing–which retained its commitment to socialism from below and the "Third Campism" represented by the slogan "Neither Washington Nor Moscow but International Socialism"–to which Joanne remained committed for the rest of her life.

After two years at the University of Chicago, Joanne moved to New York City with her first husband, Sy Landy. It was in New York that she first met Julius and Phyllis Jacobson, who had founded the journal New Politics in 1961 and were important political influences in Joanne's life.

New Politics was launched in response to the rightward turn of Shachtman, and Joanne was to become an editor of the re-launched New Politics, with the Jacobsons, in 1986. She remained active on the New Politics editorial board until the last weeks of her life.

JOANNE MOVED west and enrolled at the University of California at Berkeley in the fall of 1964, just in time to become a founder of the Independent Socialists Club (ISC) and for the beginning of the Free Speech Movement at Berkeley.

Hal Draper, one of the leaders of the left wing of the Shachtmanite tradition, along with others including Joel Geier and Mike Parker, formed the ISC based on the principles of socialism from below.

Socialist intellectual and Cuba expert Sam Farber, himself was one of the founders of the ISC, noted at the June 2017 gathering to honor Joanne that she was the star recruiter to the ISC in Berkeley–based not only on her intelligence and perseverance, but her ability to listen.

This experience in Berkeley was crucial to Joanne's political development. The organizing skills remained with her the rest of her life, while the experience of the rapid growth of the anti-Stalinist left and the high level of politics and activism of the period led to a sense of optimism and possibility that Joanne always carried with her.

Among other things, Joanne also met her most important lifelong political collaborator, Tom Harrison, in Berkeley when Tom arrived there in 1966.

In September 1969, following the implosion of the Students for a Democratic Society (SDS) and the national growth of the ISC, it was decided to form a more centralized national organization, the International Socialists (IS).

Joanne was a member of the IS from its founding, but was expelled in January 1972 for breaking discipline over the question of the slogan of victory for the National Liberation Front in Vietnam. The IS position was to support the struggle of the North Vietnamese and to call for a military victory to the NLF on the basis of their democratic struggle for national liberation, without being uncritical of the NLF or providing political support.

Joanne was one of a group that, while opposing U.S. imperialism and calling for the U.S. troops to leave Vietnam, opposed active support for the NLF, believing this would substitute one set of authoritarian rulers for another in Vietnam. It wasn't the disagreement in opinion, but the decision to publicly distribute a flyer advocating the position, that led to Joanne's expulsion.

Nonetheless, Joanne and the group who joined her around this issue did their best to minimize the contention arising from the split, and she succeeded in retaining close political relationships with the leadership and members of the IS that paid off through the coming decades of her political life.

This tactical decision on the handling of her expulsion from the IS was emblematic of a number of qualities the Joanne possessed: a political farsightedness, an ability to understand the various sides of an argument without conceding her position of principle, and her ability to organize and win people to her position.

INITIALLY, FOLLOWING the split with the IS, Joanne was part of an informal grouping called "Socialists for Independent Politics." While short-lived, this grouping did produce a political bulletin, but it was separate and politically distinct from the group around Hal Draper, who had left the IS in 1971. Draper was moving away from an immediate commitment to political organization per se, and was calling for the creation of a "political center" like those built around left-wing political journals.

Though not hostile to Draper, Socialists for Independent Politics generally believed in the need for pluralistic political organization and independent political activity, and they were critical of what they came to see as Draper's growing softness toward the labor bureaucracy.

Joanne returned to New York City in 1975, where she lived for the rest of her life. In 1980, she became involved with a group of activists who built support for the independent Solidarnosc trade union movement in Poland.

This work proved enormously successful and put Joanne in contact with a broader milieu of political activists, including some who came from, but were critical of, the official Communist Parties. Some of these activists included Ed Asner, Noam Chomsky, Barbara Garson, Michael Harrington, David McReynolds, Pete Seeger, Paul Sweezy and E.P. Thompson.

Building on the ideas of E.P. Thompson of "détente from below," the CPD sought to build contacts with, and strengthen the capacity of, peace groups on both sides of the Cold War between the U.S. and the former USSR. Throughout the 1980s and early 1990s, Joanne, on behalf of the campaign, traveled to Eastern Europe in support of the aims of the Campaign.

Often in her capacity as co-chair of the CPD, Joanne was actively involved in struggles against U.S. imperialism in Latin America in the 1980s, in Bosnia and Iraq in the 1990s, and in the post-9/11 imperialist wars in Afghanistan and Iraq.

In recent years, she was involved in campaigns in solidarity with the peoples of Iran and Greece. For example, in her inimitable way, she brought together activists from all sides of the Greek political left, both in the U.S. and in Greece, to build a solidarity movement against the humanitarian crisis of neoliberal austerity.

NEITHER JOANNE nor the CPD wavered in their commitment to the struggle of the peoples of countries victimized by U.S. imperialism.

Nor did Joanne overlook the role of other imperial interests and the brutality of anti-democratic dictatorships throughout the world. She combined a ruthless and committed anti-imperialism, with an equal commitment to the struggles from below for democracy and basic humanity waged across the world.

Sam Farber described her as a "principled and critical internationalist." In this way, and on this basis, she and the CPD were able to play a unique and critical role in the antiwar movement in the United States.

As Ashley Smith wrote in a tribute to her on behalf of the editorial board of the International Socialist Review: "[Joanne] was an internationalist who fought against all imperialisms and all states that oppressed their peoples, in the hopes of building a new and democratic society throughout the world."

Similarly, activists in Haavar: Iranian Initiative Against War, Sanctions and State Repression wrote in a moving tribute to Joanne:

[C]hallenging those in the antiwar movement who in the name of "anti-imperialism" refused to criticize the repression carried out by the Iranian government, she made the most principled arguments in favor of a kind of internationalist anti-imperialism that would never sacrifice the democratic demands and aspirations of ordinary people. We always knew she was with us and would have our backs, no matter what.

Sam Farber, who had known Joanne for over 58 years, noted that despite achieving prestigious academic degrees at Berkeley (in History) and Columbia University (in Public Health), Joanne had dedicated her life to her political ideals.

In that dedication, Joanne Landy's own humanity was ever present. The love and respect that she earned was always shared back to her friends and comrades. Her death has left those who knew her with an enormous sadness.

The greatest tribute to her legacy will be to honor her political commitments with an intelligence and empathy we can only hope to mirror. Joanne Landy: ¡Presente!

Posted October 27, 2017 In Memoriam by newpolitics
About Author

AARON AMARAL is a member of the New Politics editorial board and a founding member of AKNY, the Greece Solidarity Movement New York.