Workers Will Have to Fight to Make Gains Under Biden Presidency 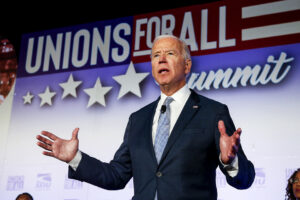 President-elect Joseph Biden has promised to check corporate power, to encourage unionization and collective bargaining, and to insure that workers are treated with dignity and receive the pay, benefits, and workplace protections they deserve. If he were to do so it would represent a dramatic change from previous Democratic presidents, from Jimmy Carter to Bill Clinton to Barack Obama, who have all failed to keep those same promises.

For forty years corporations have waged war against the working class and the U.S. government has consistently failed to defend country’s laboring men and women. Consequently only 10.3 percent of all workers (14.6 million) are union members, down from 35 percent in the 1950s. In the private sector the rate is only 6.2 percent, though it is 33 percent in the public sector. Strikes of 1,000 or more workers have generally declined, from three or four hundred from the 1950s to the 1970s, to just 25 this last year, though that was the largest number in a decade.

Since the coronavirus pandemic began, tens of millions have lost their jobs, with at least 20 million unemployed at present. Government and employer responses to the virus have provoked a series of small strikes and protests. Nurses, teachers, and transportation workers have been leading the fight. But labor unions have mostly been on the defensive with no unified strategy except to put their hopes in electing Biden and more Democrats to Congress.

While he has filled a number of cabinet posts, Biden has not yet picked a Secretary of Labor. AFL-CIO President Richard Trumka favor Boston Mayor Marty Walsh, who was previously the head of the city’s Building and Construction Trades Council, the most conservative group of union members, mostly white men, many of whom supported President Donald Trump. Public employees and service employees, who are largely Black, Latino, and female, are not happy with that choice. Some unions want Biden to pick Congressman Andy Levin of Michigan, scion of a liberal political family who worked closely with unions. Biden could also choose California’s Secretary of Labor Julie Shu, the daughter of Chinese immigrants. Biden’s cabinet picks are already ethnically and racially diverse and so he could choose Walsh or Levin, both of whom are white men.

Historically, workers made gains economically and politically during periods of labor upheaval. When workers used their power to strike, they were able to force employers and governments to make concessions. This was the case in the 1930s when millions of stevedores, miners, autoworkers, steelworkers, electrical workers and many others created powerful industrial unions. Similarly in the 1960s public employees such as teachers and social workers engaged in illegal strikes for union recognition and brought most government workers into the labor movement. Still, looking back, it is clear that, though the Great Depression of that era began in 1929, workers did not begin to fight back until 1934 and did not make major gains until a few years later. So workers today may need five or even ten years to build a powerful labor movement.

In the 1930s, the Communists, Socialists, and Trotskyists played important roles in leading the most militant strikes of that era that created the new unions. Today the Democratic Socialists of America is engaged in several labor organizing projects involving nurses, teachers, social workers, warehouse workers, transport workers, restaurant workers and others. Some of DSA’s labor activists have a rank-and-file orientation, while others work with progressive union officials or staff. During the next few years DSA and other left groups will have to develop the strategies and tactics that can help workers to rebuild their power in the workplace and society. Organizing workers today raises new challenges, as many have precarious jobs and large numbers are undocumented immigrants. Our work is cut out for us.

Posted December 14, 2020 Labor, United States by Dan La Botz
About Author
DAN LA BOTZ is a Brooklyn-based teacher, writer and activist. He is a co-editor of New Politics.