Why is Biden Winning? 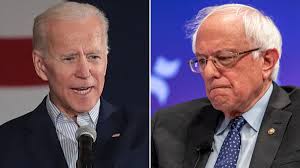 Joe Biden turned out to be the big winner on Super Tuesday. While not all of the votes have been counted, Biden seems likely to end up with a majority. He is now positioned to do well in the rest of the primaries and is likely to come into the Democratic Party Convention with majority of delegates. The major media, as to be expected, are hailing him as the Democratic Party savior.

Bernie might make a comeback. Perhaps, as some have suggested, Elizabeth Warren, whose own campaign has no way forward, might endorse him. Sanders and Warren aides are reportedly discussing that possibility. That would give Sanders a real boost—but it seems unlikely. Remember that Warren declared, “I’m a capitalist to my bones.” A Warren endorsement of Biden might win her a cabinet post.

But let’s turn to the real question: Why is Biden winning?

First, of course, after Joe Biden’s victory in the South Carolina race, the other moderates—Pete Buttigieg and Amy Klobuchar—dropped out. Then they endorsed Biden as did earlier dropout Beto O’Rourke. All three joined Biden for a big rally in Houston, Texas with lots of media attention that no doubt influenced voters in that state and elsewhere. The next day Michael Bloomberg, who spent millions and won very few delegates, also dropped out and endorsed Biden.

There is nothing surprising about establishment Democrats coalescing around a leading moderate candidate, especially when, as in the case of Buttigieg, there was encouragement from Barack Obama. No doubt Klobuchar, Buttigieg, and O’Rourke have been promised or are expecting some sort of political reward, perhaps cabinet or other high level positions. We knew that the establishment was powerful—representing as it does, the banks, corporations, the corporate media, the political class—and now we have seen it in action.

Sanders’ support has no doubt also been somewhat exaggerated as a result of his large and spirited rallies and the tremendous amount of money he has raised—though most of that money has come from perhaps five million donors among about 140 million likely voters in 2020. Those things were a good indication of the fervent character of Bernie’s supporters, but not of the campaign’s actual depth and reach.

Sanders proved to be weaker than many of his supporters understood. His fundamental strategy failed: Young voters and other new voters did not turn out in numbers large enough to change the balance of forces and bring him victory. In fact, many young people, as he has himself admitted, didn’t turn out to vote. And where voter turnout did increase, for example in Virginia (spectacularly) and Texas, the majority were moderate voters who cast their ballots for Biden.

Then, of course, there is the black vote. Most black people don’t consider themselves to be liberals. So it is not surprising that while Sanders significantly won support from young African American voters, the majority of black voters—between 60 and 70 percent—voted for Biden in Virginia, North Carolina, Alabama, and Tennessee. Sanders did well among Latinos in the West, contributing to his victory earlier in Nevada and also in Colorado and California on Super Tuesday, but this could not compensate for losing the black vote.

Black voters voted for Biden because he had been the vice-president of the first black president, Barack Obama. And more importantly because the Democratic Party establishment has worked for decades to convince black voters that their fate depends on the party. Bernie Sanders could not overcome the powerful political links forged over decades between the establishment and black politicians and preachers, a relationship that has maintained the black community’s subordination and dependency.

After centuries of abuse and neglect, exploitation and oppression, black voters took enormous pride in the election of Barack Obama. And no Democratic Party politician, including Sanders, dared speak the truth—as some black intellectuals like William A. Darity, Jr., Adolph Reed, and Cornel West have done—namely, declare that Obama had failed the black community. Nor can anyone say out loud that Biden, Obama’s v.p., was nothing but his insignificant, smiling sidekick, though black people of course already know that.

Still, faced with Trump, African Americans, having no where else to turn, rally to Biden and the Democratic Party establishment to defend them, even though it has for decades failed to do so. Consequently and lamentably, black people (at least the majority who support Biden), who have so often been the vanguard in our social struggles, have adopted a pragmatic position that makes them a conservatizing force in the primary.

Deeper Reasons that Biden is Winning

The more important reason that Biden is winning, as I argued in an earlier article, is that while Sanders’ campaign has some of the qualities of a social movement, we do not have a level of class struggle sufficient to propel Sanders into the presidency and others of his ilk into congress. A genuine leftist political movement requires a deep sense of crisis within the society and a powerful desire for social change that has been expressed in social conflict. The votes for Biden, Buttigieg, and Klobuchar suggest that many and maybe most Americans do not feel we face such a crisis—or only see the crisis as Trump’s presidency—and they don’t desire serious structural change.

Jacobin and DSA’s Bread and Roses caucus have tended to vastly exaggerate the uptick in recent strikes, which, while important, hardly amount to a significant strike wave. Other social movements of recent years—Occupy Wall Street, Black Lives Matter, and Me Too—have had an episodic character, here today, gone tomorrow, with some of the energy they have given off flowing into the Sanders campaign, but much of that energy dissipating. The forty-year neoliberal reorganization of the economy and re-composition of the working class has yet to produce a new working class movement with the power that led in the 1930s and again in the 1970s to massive strikes and to experiments in independent left parties.

Biden may well arrive at the convention with a majority of delegates. But if either Sanders or Biden arrives with a plurality and cannot win on the first ballot, then on the second ballot the super-delegates (who this year are being called “automatic delegates”) will be able to vote. These are “distinguished political leaders (former presidents, etc.),” governors, senators, congressional representatives, and Democratic National Committee members, that is, the Democratic Party establishment. There are 775 of these super-delegates (making up 16 percent of the total of the 4,750 delegates) and the great majority of these can be expected to support Biden. And their votes will give him the nomination.

Sanders has pledged to support the Democratic Party nominee and he can be expected to do so, just as he did in 2016. If he loses, many of Sanders’ supporters will be deeply demoralized and others will be angry. Some may come out of this experience with a desire to create a new political party, a working peoples’ party, a mass socialist party. More power to them (and I’m happy to join them in the effort) though we will face the same fundamental problems as the Sanders campaign: the low level of class struggle, the episodic character of the mass movements, the organizational and ideological hold of the Democratic Party.

Though I wish I might be proven wrong, as I wrote a few months ago:

“Yet, we know that the American capitalist class and the corporate media hate Sanders and what he stands for, as does the entire political establishment, including the Democratic Party leadership, which loathes him. From the beginning, a Sanders victory has been a long shot….We do not have a level of class struggle that might propel Sanders to the presidency together with a large number of Democrats into the House and Senate, which is the only way that he could affect the political direction of America.

“We find ourselves in the uncomfortable position—not so uncommon for socialists at different periods over the last 170 years since the Communist Manifesto—of having to recognize that the working class is not yet prepared to act on its own. We will continue organizing and fighting for our politics in the labor and social movements, while waiting for the events that will trigger the eruption of the mass movement without which our politics have no vehicle.”

2 comments on “Why is Biden Winning?”