Where Will the Sanders Movement Go Now? 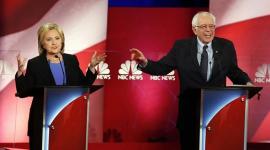 For a year now presidential candidate Bernie Sanders has been the hope of millions in the United States, people who were disgusted with the role of the banks and corporations in politics, angered by the increasing inequality in society, appalled by our country’s racial injustice, and opposed to a foreign policy based on military intervention. Throughout the nation millions rallied to Sanders’ slogans calling or a fight against the “billionaire class” and for a political revolution. Taking up the demands and embracing the spirit of Occupy Wall Street first and then of Black Lives Matter, the Sanders campaign has been an unprecedented radical, populist movement, rejecting Wall Street and Washington and suggesting a more democratic, egalitarian, and peaceful future.

Running as a democratic socialist on a program of economic and social reforms—a higher minimum wage, free public education, health care for all, rebuilding of the national infrastructure, and an expansion of the Social Security system, and end to a racist and violent justice system, and opposition to regime change—Sanders raised $200 million dollars in individual contributions averaging $27, won millions of votes, garnered the support of three major labor unions (postal workers, communications workers, and nurses), as well as 12,000 individual union members organized in Labor for Bernie. The oldest candidate in the race, he won the largest proportion of votes from the young of all races and genders.

Now the Democratic Party presidential primary election appears to be effectively over, with only the Washington, D.C. primary remaining on Tuesday, June 14. Hillary Clinton has won 2,219 delegates, and Bernie Sanders has won 1,832 delegates. In terms of the popular vote, Clinton’s proportion was larger, since Sanders did better in states with caucuses, where fewer people vote.

In addition to the elected delegates, there are also 719 super-delegates who are not elected; they come from the Democratic Party National Committee, the House of Representatives, the Senate, and state governors, and distinguished party leaders. Clinton has 581 super-delegates, while Sanders has only 49. Barack Obama and Elizabeth Warren, who declined to endorse any candidate throughout the primary have now endorsed Clinton. At this point it is virtually impossible for Sanders to win the nomination mathematically, so, short of some political miracle, such as an indictment of Clinton for violating national security norms while Secretary of State—a development that no one foresees—she is the Democrats' presumptive nominee.

On June 9, Bernie Sanders met with President Barack Obama where he promised to work to defeat Donald Trump. Sanders said, “I look forward to meeting with (Clinton) in the near future to see how we can work together to defeat Donald Trump and to create a government which represents all of us and not just the 1%,” Sanders told reporters. Immediately after that meeting, Obama, who had remained neutral throughout the primary process, endorsed Hillary Clinton.

On June 12 Sanders refused to concede defeat and refused to endorse Clinton saying, “We are going to take our campaign to the convention with the full understanding that we are very good at arithmetic and that we know, you know, who has the received the most votes up to now.” But then on June 15 Sanders met with Clinton in what both called a “positive meeting,” suggesting that though Sanders will continue his fight at the convention, he may have given up hope of changing delegates' minds and becoming the nominee.

Sanders Supporters—In Search of the Future

Thoush Sanders may to bow to the inevitable, many of his supporters are even less willing to knuckle under. The election process—with the corporations providing much of the funding for Clinton, the corporate media shaping the interpretation of events, and structures such as the super-delegates suggesting the final outcome from the beginning—have infuriated many of Sanders supporters. Most recently, on June 6, on a day when there were no elections anywhere, the Associated Press declared Hillary Clinton the victor on the basis of 20 super-delegates who came out for her. This took place just before the California primary and could have suppressed the Sanders vote.

Sanders has pledged to fight on to the Democratic Party Convention on July 25-28 in Philadelphia, Pennsylvania with the goal of influencing the Democratic Party’s rules and platform. In addition to the nearly 2,000 Sanders delegates inside, there are expected to be tens of thousands of his supporters outside the convention hoping to influence events inside. Yet little can happen inside that will really influence the Democratic Party, its candidate, or the election campaigns that will culminate in the national elections on Tuesday, Nov. 8. The presence outside the convention of Sanders’ young followers, by and large until now a peaceful lot, may prove to be combustible material, especially if the police mishandle the situation, as they so often do, and we might see a convention and protests as raucous and explosive as the Democrats at Chicago in 1968.

The convention could conceivably change the super-delegate rules, though that is no sure ting, and in any case the change would only become effective in 2020. As for the platform, it is little more than a piece of paper. The Democratic Party Platform, usually very vague and general in its language, may be said to represent the sentiments of the convention and attempts to win the support of the voters. But neither the presidential candidates nor other candidates are bound to adhere to it during the campaign or to attempt to implement it once elected. Certainly Hillary Clinton, who has a long history in politics as First Lady, as Senator, and as Secretary of State, and who has an established record as a representative of the economic and political establishment, can be expected to ignore the platform and pursue the goals of Wall Street and Washington.

Many of Sanders supporters, who have become increasingly sophisticated through this campaign, feel a deep revulsion toward the Democratic Party and Hillary Clinton. Several thousand of them are expected to meet in Chicago from June 17 – 19 at the Peoples Summit, an assembly called by the National Nurses United; Peoples Action, 350.org, Democratic Socialists of America (DSA), and other organizations. While this will give us a picture of some of the best organized sectors of Sanders supporters, the Peoples Summit appears to be more a conference than a convention, and it is not clear at this point that any definite organizational or political proposals will come out of it, though surely important networks will be reinforced.

Some of Sanders supporters have already become renegades from the Democratic Party, and in some places, in small but not insignificant numbers they are beginning to move into the Green Party to support Dr. Jill Stein, that party’s candidate for the U.S. presidency. Stein, whose program stands to the left of Sanders, could conceivably begin to pull some votes away from the Democrats, though there will be tremendous pressure on all Democrats and especially on the Sanders followers to back Clinton in order to defeat the presumptive Republican nominee Donald Trump whose racist and misogynist rhetoric and flirtations with neo-Nazi groups leads many liberals and leftists to characterize him as a fascist. The cry will be: Hillary Clinton and democracy or Trump and fascism. And though a vote for Clinton is not a vote for democracy but rather a vote for corporate neoliberalism, for austerity, and for militarism, it will be hard for many to resist, and understandably so, for none of us on the left want Trump.

Whether Sanders supporters turn toward Stein or vote for Clinton to defeat Trump, the movements has become both too radical and too broad to be contained completely within the Democratic Party. Some will continue to work within the Democratic Party, but looking for more radical candidates, self-delcared socialists in the Democratic Party, as well as working for independent socialists when they can. Some will be leaving, having become convinced socialists, whatever exactly that means to them, and they will be looking to build an alternative on the left. These newly radicalized groups, no longer satisfied with the Democratic Party and anxious to build alternatives represent the future of left politics in the United States today. The immediate next step may be in the streets, not only in the protests at the Democratic and Republican Party conventions, but in the next Occupy and the next Black Lives Matter, for the one thing we have learned for sure is that it is the movements in the streets and on the union picketlines that drive politics to the left.

A version of this article appeared earlier in Viento del Sur.

*Dan La Botz is a Co-Editor of New Politics.

Posted June 15, 2016 Electoral Politics, United States by Dan La Botz
About Author
DAN LA BOTZ is a Brooklyn-based teacher, writer and activist. He is a co-editor of New Politics.

One comment on “Where Will the Sanders Movement Go Now?”