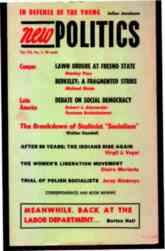 New Politics editorial board member Michael Hirsch (1945-2021) was a young New Left radical when he came into contact with the journal’s founding editors, Phyllis and Julius Jacobson. The first of his many articles for it appeared in the Spring 1970 issue.

Push Comes to Shove is a political attack on the student movement. Written ostensibly from the vantage point of three years at Harvard studying Politics with S.M. Lipset, it attempts to explain the cause of the “chaos and irrationality” during the spring ’69 occupation. Its market is obvious, it panders to those requiring a justification for political repression and for those liberals who need to rationalize their own failure around attacks on the left. As a document for the Movement, to serve as a mirror for self-criticism, it is useless—it was never meant to be that. Kelman is a polemicist against, not within the Movement.

Coming out of Dissent magazine, an “enfant terrible” with the mind of a brutalized ex-radical, his politics, absorbed whole from older, soured men, appear stark, hard, and simplistic. Kelman sees no structural problems in capitalism, no stress between its existence and his cherished, fetishistic notion of democracy-writ-large. Kelman’s mentors felt the need to choose years ago in the struggle between a bourgeois West and a static socialist East. Kelman chose, too, and the result is a burning antipathy for those of his own generation who scorn his lifeless definition of socialism and his managerial notions of detached scholarship.

If, as the theory goes, the West is chosen because of its civil libertarian position then defense of its class-dominated institutions becomes a necessity. A tactic becomes a strategy. The Right must be kept at bay and technocratic innovations adapted for the gradual transformation of those “flexible” institutions through strict adherence to one-man one-vote. The formalistic democracy espoused is reminiscent more of Bernstein than of Luxemburg, the scholarship more of Comte than of Marx.

Everything follows from the need to buttress existing institutions. A student left that long ago rejected this strategy as at best dubious must be characterized variously as “totalitarian, elitists, frenzied,” and worst of all “unreasonable.” Concepts such as “democracy” and “totalitarian” become things-in-themselves, without depth or historical context. One doesn’t encounter in Kelman a workable doctrine for a mass-based revolutionary movement capable of taking power so much as a religion where rigid forms precede any meaningful content. The rifling of Harvard files is more reprehensible than the contents of the files. The burning of a bank more heinous than the founding of a bank, ad infinitum.

For Kelman, the Left can only bring on fascism. It is not the inability of liberal capitalism to solve its inherent contradictions that necessitates a shift toward fascism, but provocation from the left. We are reminded by Kelman of the German example, of the precarious situation of German stability, and the fragility of its institutions. Would that Kelman really understood the German example, the bankruptcy of the Social Democracy in the face of the failure of bourgeois democracy and the objective needs of German capital for expansion and war. If any analogy exists, it resides not so much in Communist provocation but in Communist inability to formulate a workers’ front against both Hitler and the bourgeoisie.

According to Kelman, S.D.S. grew at Harvard because it created a “false tension,” suggesting that SDS capitalized opportunistically on students’ fear of the draft, forcing them into larger confrontations. The abolition of ROTC was never significant in itself, but was simply an excuse to destroy. What was always clear for partisans in anti-ROTC struggles, but not for Kelman, was the actual depletion of an officer cadre from a particular university. It was never seen as a moral gesture, but as an affirmative political stance because of the overall effect of simultaneous struggles throughout the country. Anti- ROTC struggles were, as Sweezy and Magdoff have argued, the single most important anti-imperialist struggles that the Movement waged. The Harvard struggle accomplished the goals of serving as both a model for other struggles and depriving the military of a number of elite trained specialists.

Kelman will not discuss “power” or “control” (and not a word about “capitalism”) the very questions that produced a new-Left. “Alienation” is treated as a psychological phenomenon. Harvard remains a class-dominated institution in a capitalist society, but for Kelman this is irrelevant.

Similarly, revolution is treated as a fixation of the Left where the only conceivable, reasonable alternative is through electoral reform. Ironically, it is the French uprising of May-June 1968 that proves to him that “if there was no successful revolution there, we might as well forget about revolutions in advanced industrial society. They just aren’t going to happen, so we’d better start thinking about how best to bring change through reform.” (p. 152). But it was precisely this position that led the French Communist Party to betray the revolution, to orient a political strike along economistic lines. What France showed was the ability of people to emancipate themselves to “make a revolution.” It was the integration of precisely those workers’ institutions most responsible for legalistic reforms, the unions and the CP, (and not the workers themselves) that led to this failure. This is the strategy which Kelman advocates.

What is most offensive about Kelman is his incredible intellectual elitism— a detachment that flows from and reinforces his politics, and his reified notions of democracy. The Harvard strike further proved to him how politically innocent students can be galvanized by their unreasoning emotions into larger and more “violent” actions. An issue that affected them peripherally (the war) was linked to them personally (the draft), and Push Came to Shove. The catalyst for his distorted perception was SDS, viewed as action-freaks, by the detached cool-headed Kelman. It’s all so convenient. Why did people follow SDS? Their irrationality! Why did Kelman’s YPSL fall on its face- ditto. His alienation from people is extreme. The Movement in its entire evolution was never to his taste—a movement of “saints,” it quickly became one of “psychopaths.” In fact, neither was ever true, except in his own fantasy. A young movement, it based its politics on empirical judgments, rejecting rigid styles and what then passed for Marxism, as not so much incorrect as irrelevant.

In coming to terms with the American century, it rediscovered Marx, again on its own terms—terms admittedly too narrow. Now, when a discussion of alternatives in building a revolutionary left is critical, the diffusion of today’s movement is explained solely in terms of saints in a fall from grace.

Similarly, pot-smoking, the single most striking representation of the social dislocation of a generation, is compared to “goldfish-eating,” and Harvard becomes a benign institution with pretty women to make men happy. (SDS women are flat-chested, we are told.) Only during the strike is Kelman edgy— he complains of nightmares of surging masses, feeling an estrangement from events beyond his control. But Kelman’s alienation was the Movement’s freedom. All his intellectual sophistry to the contrary, he essentially remains afraid of people, counting personally and politically on their continued passivity.