What’s behind the protests in Iran and what can you do? 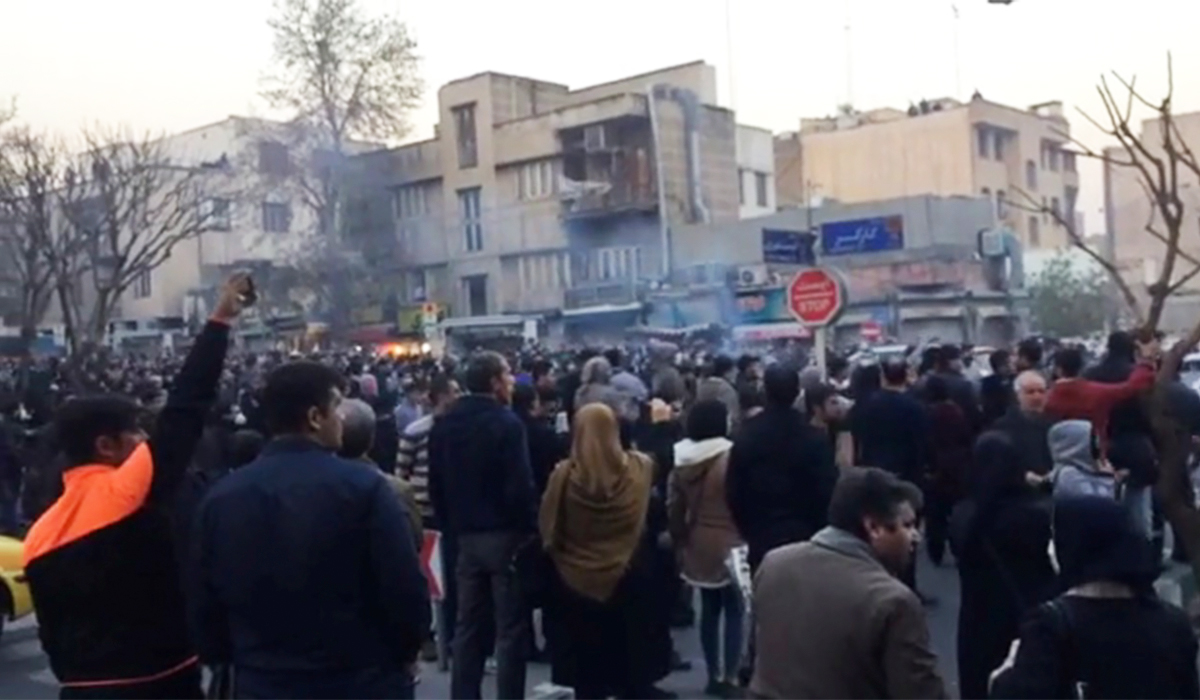 Over the New Year, a wave of protests has erupted in Iran, as people in towns all over the country took to the streets to air their grievances.

Many protests were about basic economics – unemployment or low pay, high prices for basic foodstuffs like eggs – but there have also been reports about political aspects to the protests.

And because the protests have been led by ordinary Iranians (unlike protests led by students, whose language skills make them easier for some western journalists to report), they have proved more difficult to interpret, allowing people like President Trump to impose their own agenda.

So what’s really going on in Iran, and what can you do about it?

The emergence of these street protests is no surprise to trade unionists working on Iran. We have been reporting on the situation facing Iranian workers for years, and supporting the struggles waged by a small but important group of independent trade unions in the country. The International Trade Union Confederation has ranked Iran a ‘category five’ country – the worst level for a non-failed state – because there is no guarantee of workers’ rights.

Despite western portrayals of the regime as an Islamic theocracy, the struggles of trade unionists in Iran show that the country is in fact more of a kleptocracy. Iran’s rulers represent people who want to loot the economy by refusing to pay decent wages or, in some cases, any wages at all.

Workers’ protests over non-payment of wages – one of the causes of the current demonstrations – have been commonplace, although other workplace issues are also problematic. Workers often go without wages for as much as three months, and companies intimidate them, harass them and dismiss them for protesting.

Trade unionists at the Haft Tapeh sugar refinery have not received wages for more than four months. And when worker Aube Aghaabi recently took the company to court after a serious workplace accident, management retaliated by firing him along with 50 relatives or workers with a similar last name. The factory is under constant surveillance by the security forces.

Police violence is common. On 19 September 2017, workers protesting against non-payment of wages were attached with sticks in Arak. They were employed at Hepco and Azarwater companies and were arrested.

The Revolutionary Guard which has thrown itself into attacking protesters is not just an Islamic militia, but a huge business organisation, defending not just its political influence, but also its economic position at the heart of the kleptocracy.

There is a ban on independent trade unions in Iran. The only authorised national workers’ organisation is the Workers’ House, set up and backed by the authorities and employers. The 1990 Labour Law stipulates that an Islamic Labour Council can be established at any workplace, or alternatively a workers’ representative can be appointed. The Ministry of Labour and Social Affairs is obliged to form the Islamic Labour Councils in units which have more than 35 permanent employees.

Trade unionists have been arrested and given harsh prison sentences on trumped-up charges, including ‘spreading propaganda against the system’, ‘gathering and colluding to commit crimes against national security’ and ‘forming a group with the purpose of disrupting national security’.

One of the first protests in Iran this season was not reported by the global media. It was a protest rally on Boxing Day outside the Ministry of Labour in Tehran, to address the deteriorating health conditions of Reza Shahabi, the jailed Treasurer of the Syndicate of Workers of Tehran and Suburbs Bus Company.

The gathering was brutally attacked by security forces and 51 people, including many women such as Robabeh Rezaee, Reza’s wife, were arrested and later released. Others were hospitalised. Earlier, on 22 September 2017, members of the Tehran bus union undertook peaceful actions in solidarity with Reza. Actions included flashing headlights and slowing down their vehicles. In response, several vehicles were seized and one worker was detained for distributing pamphlets.

Reza is just one of the trade unionists we have been supporting for years. He was imprisoned in 2010 on charges of ‘propaganda against the regime and conspiracy against national security’. After spending four years in prison, and after solidarity campaigns around the world, Shahabi was released on medical leave on 6 October 2014.

On November 2016, Shahabi began to face pressure to return to prison to complete his sentence (initially for a further three months then extended unilaterally by the prosecution for five months). On 9 August 2017 Shahabi was forced to return to prison. He started a hunger strike to protest against his unjust imprisonment, and suspended it after 49 days, on 27 September 2017 after receiving promises about improvements to his conditions. The Boxing Day protest resulted from a failure to honour those commitments. He is believed to have suffered a stroke in the last few weeks.

Another jailed trade union leader is Esmail Abdi, a Maths teacher from the Iranian Teacher Trade Association. He was sentenced to six years in jail on false charges in October 2016 after organising peaceful protests. On 30 April 2017, Abdi started a hunger strike to protest against the continued, unlawful repression. After 38 days of hunger strike he was transferred to hospital for two days, then returned again to prison. He was released on a bail in June but rearrested on 27 July 2017.

On 1 November, security forces went to Alireza Saghafi’s house to arrest him on a 3 years imprisonment verdict for organizing May Day gathering in Laleh Park on International Labour Day 2009. Around 150 workers and labour rights activist were arrested on May Day 2009.

And the regime continues to attack leaders of Reza Shahabi’s bus workers’ union. Ebrahim Madadi, vice-president, was sentenced to five years and three months in August 2016. He been summoned to appear at Branch 36 of the Revolutionary Court’s Appeals Court of the Islamic Revolutionary court on 3 December 2017.

And Davoud Razavi, a member of the board of directors of the union, was sentenced to five years in prison in February 2016.  He appeared in the Appeals Court of the Islamic Revolutionary court on 4 November 2017, without the presence of his lawyer.

But what can we do?

First, of course, we can reject the crocodile tears of those like President Trump whose tweets about the Iranian masses struggling for freedom mask an agenda of external interference in the country. He still wants to unstitch the deal over Iran’s nuclear ambitions put together by the EU which have led to the lifting of sanctions on Iran.

Iranian workers opposed to the current regime are rightly also opposed to the intervention of outsiders. They know that opposing such interference would be the regime’s best defence against internal calls for democracy and workers’ rights.

Instead, we can show practical solidarity with those Iranians who are and have been calling for a change in the rules governing Iran. That means backing the independent trade unionists who are suffering state repression for their views and activities.

Until recently, Mahmoud Salehi would have been on the list of jailed trade unionists above. But, partly as a result of international trade union campaigns, he was released from jail on 23 November 2017.Mahmoud has spent several periods in prison for over a decade because of their legitimate and peaceful activities as trade union activists and human rights defenders. He is the spokesperson for the Organisational Committee to Establish Trade Unions, representing bakery workers in Saqez.

He was originally arrested after a peaceful demonstration to celebrate May Day 2004. He was sentenced to five years’ imprisonment and three years’ internal exile in the city of Ghorveh, Kordestan. At his trial, the prosecutor reportedly cited his trade union activities as evidence against him, and referred to a meeting he had held with officials from international trade unions shortly before the May Day demonstrations.

He has been in and out of jail ever since, becoming an Amnesty International prisoner of conscience along the way. But as his recent release shows, solidarity campaigns can work.

So here are some actions you can take today

Esmail Abdi has become the latest Iranian trade unionist prisoner of conscience who is the subject of an Amnesty International campaign with global union support. You can craft your own message or simply sign up to the Amnesty call for his conviction to be quashed.

The global food workers’ union IUF is campaigning to help the Haft Tapeh sugar refinery workers mentioned above. You can join their campaign to call on the authorities to ensure that all current and retired workers are paid the wages they are due and that all charges against workers protesting wage arrears be dropped.

And closer to home, the Iranian regime is not just attacking workers in Iran. One of the best sources of information about what is currently going on in Iran comes from the BBC Persian staff – members of our own National Union of Journalists – who are facing reprisals for their work, including asset freezes and blocks on international transactions and the harassment of their families in Iran. See the NUJ website for updates and ways to back the campaign.

And you can keep up to date on what’s going on in Iran – with media reports from the BBC, and with trade union reports on LabourStart.