To The People of the World 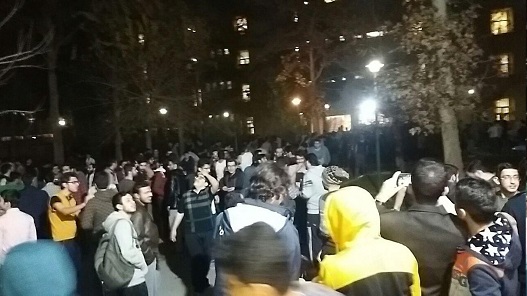 Since Thursday December 28 the Iranian people have engaged in extensive protests against the government of religious despotism in Iran. These protests have continued in full force in tens of Iranian cities, from north to south and from east to west of the country. The protests started with slogans against poverty, rising prices and unemployment, and in no time attacked the entire Islamic Republic as the prime destroyer of people’s lives.

Skirmishes have occurred between government forces and the protesting people on the third day of these protests and several people have been killed and wounded in the city of Doroud in Lorestan province as a result of shooting by the police. The protesting people have responded to such violent acts by attacking centres of government suppression and by setting fire to the pictures of Khomeini and Khamenei as symbols of the system, and by shouting slogans against Khamenei and Rouhani and the government and it two factions as a whole.

The fundamental truth is that the Iranian people do not want the Islamic Republic, and are screaming this in these protests through slogans such as “Down with the Islamic Republic!”, “Death to Khamenei and Rouhani!”, “Death to the dictator!” and, “Bread, jobs, freedom!” Various ranks of the people who have had enough of economic pressures and political and religious injustice, and women who have been deprived of their most basic rights, are participating in these demonstrations. These protests are the rightful response to thirty nine years of deprivation, disenfranchisement, poverty, disrespect and execution and torture. The people want to topple this government and establish a non-religious, free and secular state that would guarantee the welfare of the people and equal rights for women, and commit itself to all political and civil rights of the citizens.

The active participation of women in these demonstrations is an important and proud aspect of these protests. Women were also in the forefront of the protests to challenge the government of sexual apartheid in the 2009 uprising of millions of Iranians. One day before the start of the recent protests in Iran a young woman in Enghelab Avenue in the centre of Tehran, in protest at the compulsory veil, took her headscarf off and waved it in the air as a banner. And now, the supporters of women’s rights have called on women to discard their head cover as symbols of their disenfranchisement.

We call on you to support the just protests of the courageous men and women in Iran. Show your solidarity by participating in the gatherings that will be organised in various cities in support of the struggle of the Iranian people. Put pressure on European governments to desist from making concessions to the Islamic Republic, cut off their diplomatic ties with this government and shut down their embassies; to demand the release of political prisoners and those arrested in the recent gatherings, and to condemn the violent reaction of the Islamic government to the protestors. The Islamic Republic is an important bastion of the reactionary and terrorist movement of Political Islam. Its overthrow in Iran would, within a short period of time, shorten the lifespan of this vicious movement elsewhere in the world. The Iranian people deserve your support throughout the world.

Originally posted at the Worker-communist Party of Iran website.