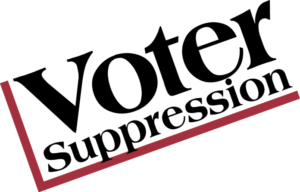 Voter suppression has become a real issue in recent years. Mostly, what we hear on voter suppression are Democrats correctly accusing Republicans of disenfranchising people of color and poor and working-class people. I want to call your attention to the voter suppression activity by the Democratic Party in the 2020 election. In a number of states, Democrats are actively trying to keep the Green Party off the ballot.

The best-known example of this occurred in Wisconsin. Green Party candidate for Vice-President Angela Walker changed her address during the petitioning period. The Hawkins campaign notified the Wisconsin Elections Commission. In response, the campaign was notified by the Commission to include a notarized statement of candidacy with Angela’s new address when submitting the petitions. That was done.

A Democratic Party spokesperson then filed a challenge against the Green Party petitions, claiming the change of address by Walker invalidated some of the petitions. The hearing on the challenge before the state Elections Commission had all the trappings of a kangaroo court. The attorney for the Democratic challenger huddled with the Democratic chair of the Elections Commission to restrict the testimony of Green Party attorneys.

The Commission upheld the Democratic challenge and the signatures on those petitions were invalidated—conveniently just enough to keep the Greens off the ballot. The Greens filed suit in the Wisconsin Supreme Court where they lost 4-3.

Wisconsin is not the only state where Democratic operatives acted to deprive people of the opportunity of voting for Hawkins/Walker. In Montana, the State Supreme Court removed the Green Party from the ballot five months after the Secretary of State determined that the Greens had qualified. Somehow the Democrats got copies of the Green’s petitions and went to signers and encouraged people to remove their signatures.

In Pennsylvania, the Democrats went to the state Supreme Court to remove Hawkins and Walker from the ballot. They were victorious on the flimsy technicality that the Greens did not submit signed filing papers in person but had mailed them in.

In Texas, the Democrats sued the Green Party to remove Green Party congressional and state office candidates for not paying filing fees, even though a state court had declared the fees unconstitutional. Nevertheless, the candidates were removed.

So, what should we make of these actions? The most obvious is the total hypocrisy of the Democratic Party. As the national Green Party said in a statement about Wisconsin. “By kicking Howie and Angela off the ballot in Wisconsin and then publicly celebrating this naked act of self-serving disenfranchisement, the Democrats have made plain their intention to ‘save democracy from Trump’ by killing it themselves first and then dancing on the grave.”

It should be noted that there has not been a public outcry about this undemocratic behavior, even from the Sanders wing of the Democratic Party. I would add that these undemocratic acts reveal how many Democrats feel about Biden and the poor campaign he is running. Biden should be winning in a walk, but the race is uncomfortably close.

Posted October 10, 2020 Electoral Politics, Left Politics, United States by Phil Gasper
About Author
Michael Rubin has been an active socialist for more than 50 years. Currently he is a member of Solidarity and active in the Green Party in California on the local and state levels.