Don’t Support Biden, Even Against Trump 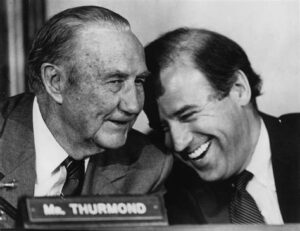 Biden with arch-segregationist Strom Thurmond in the U.S. Senate

We, members of the New Politics editorial board, wish to respond to the “Open Letter: Dump Trump, Then Battle Biden,” published in Common Dreams and signed by 55 progressives, including two other members of the board. Given the horrendous nature of Trump and his regime, we understand why the signers have taken this position. Nevertheless, we reject the letter’s call for leftists to vote for Biden as a lesser evil.

The signers include writers and activists whom we respect and admire; all the more unfortunate, therefore, that their letter parodies arguments about refusing to support a candidate who stands firmly in favor of the disastrous status quo that preceded Trump. Take this sentence: “But the message that not voting in swing states sends in 2020 is that we are okay with Trump for four more years as long as we don’t have to sully our hands by voting for Biden.” To portray those who insist on the political independence of the left as fastidious purists who only want to keep their hands clean misrepresents what we have said and believe: We are not “okay” with four more years of Trump, and we are not claiming that the letter’s signers are okay with Biden for four years. After all, the letter acknowledges that Biden, the lesser evil, is evil. Our differences are not about “purity” but how to most effectively combat Trump and the right-wing forces he represents.

First, it is important to note that Joe Biden is a “lesser evil” who has used his power to do great harm. For 40 years, Biden has been an enthusiastic proponent, and often a leading architect, of neoliberal foreign and domestic policies: assaults on public education, bank deregulation, militarized police forces, mass incarceration, gargantuan military budgets, savage wars in Afghanistan and Iraq, full support to Saudi aggression against Yemen and Israeli aggression against the Palestinians. Biden is a member in good standing of what Naomi Klein calls the “Davos class.” His entire career in Congress was bankrolled by the credit card industry. And now, running for president, he famously promised his donors that “nothing would fundamentally change” for them if he is elected. This is a promise that Biden can most assuredly be counted on to fulfill if he can. The neoliberal status quo ante, to which Biden was and is committed, together with a left that remains submerged within the Democratic Party, and therefore unable to make a broad appeal to the vast majority in this country, created the conditions that spawned Trump.

To Biden’s conservative and destructive record, the letter merely comments: “Protestations that Biden is beholden to elites are true but beside the point.” On the contrary, they are very much to the point, because they have everything to do with successfully fighting Trumpism and the extreme right. We have come to this miserable state of affairs in large part because the left has failed to create an alternative to “lesser evils” who, along with the greater evils, have devastated lives and imperiled the planet.

Biden is indeed different from Trump in ways that are important to recognize. Unlike Trump, he does not openly espouse racism and xenophobia and acknowledges the reality of global warming. Yet he stands for a return to the Obama-era status quo, in which millions of migrants were deported, people of color were at the mercy of the police, the prisons were full to bursting, economic inequality grew to immense proportions, and the globe was hurtling toward climate catastrophe. Despite the mostly meaningless promises of the Democratic platform, designed to convince the left to support him at the polls, Biden has made it clear that he rejects such progressive goals as the Green New Deal, Medicare for All, and defunding the police. He has not even pretended that he would heavily tax the rich, make massive reductions in military spending (he plans in fact to increase it), restore civil liberties, stop foreign military interventions, or identify legislation he will support to defend workers’ rights on the job, including unionization. Effective solutions to the climate crisis, which threatens life itself on the planet, require a major, sustained attack on the corporate “rights” and privileges which Biden has always fervently defended. Bernie Sanders’s claim that Biden would be the most progressive president in recent history is, at best, wishful thinking. Instead, a vote for Biden in any state is not just a vote to get rid of Trump, but also a vote for a corporate military agenda and a vote to do next to nothing about the climate crisis.

The past few years have seen the biggest, most interracial mass protest movements in U.S. history. Most of the protest has been against conditions that Trump has exploited and exacerbated but were in place before his stunning ascension to power—systemic racism; militarized police departments; public services from medical care to education ravaged by privatization and cuts targeted at the most vulnerable in our society. In the face of this upheaval, leftists are both morally and strategically wrong to advocate voting for a candidate and party that have countenanced and deepened inequality and injustice.

There is no lack of outrage at the rank injustices of the system under which we live. What is in short supply is the vision and hope that something can be done about them. One of the biggest obstacles to radical change is the misplaced loyalty that millions feel for the Democratic Party, despite the lack of enthusiasm that most have for its current leader.

Some of the letter’s signers have opposed voting for Democrats as lesser evils in the past, and they will admit that lesser evil voting has brought us worse and worse evils. But they will insist that the extreme danger posed by Trump means that 2020 is exceptional. We ask what they think will change four years from now, or eight, or twelve, that would prevent them from making the same choice. Even without a raving sociopath like Trump, even with Biden in the White House, the threat from the far right will intensify. That threat can be met only by mobilizing a militant, democratic, independent left, both in the street and at the polls. This is a daunting task, but it is made much more difficult by again rallying the bulk of the existing left in support of the Democrats.

To bar the way to an authoritarian coup or a nascent fascist movement, we advocate direct action, confrontation and civil disobedience on a massive scale, and the formation of an independent political party of the left. “Dump Trump, Then Battle Biden,” says the letter, in effect calling on the left to “stand back and stand by” during the election, and then re-emerge to continue the fight. But this fight will continue to be undermined by the stubborn, irrational belief that the Democrats are the only possible alternative to the right, a belief reinforced by supporting Biden in this election.

The society that spawned Trump and his followers is a society of monstrous class, racial, and gender inequality, a shredded welfare state, rampant brutality by police forces now known to be infiltrated by organized white supremacists, and the glorification of military violence. Its bombs and missiles, armed forces, corporations, and financial institutions enable it to confront the world as a tyrannical overlord. The Democratic Party shares with the Republicans, if not equal responsibility, then a great deal of it for this abomination. Trump is certainly far worse than Biden, but Biden is no alternative.

24 comments on “Don’t Support Biden, Even Against Trump”