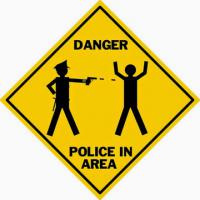 United Auto Workers Local 2865 representing 13,000 teaching assistants and other student workers throughout the University of California system, called on the AFL-CIO to end its affiliation with the International Union of Police Associations (IUPA) in a resolution passed by its governing body on July 25. This is the union’s resolution passed by the union:

We, UAW Local 2865, call on the American Federation of Labor and Congress of Industrial Organizations (AFL-CIO) to end their affiliation with the International Union of Police Associations.

The AFL-CIO’s official mission is “to fulfill the yearning of the human spirit for liberty, justice and community; to advance individual and associational freedom; [and] to vanquish oppression, privation, and cruelty in all their forms.” This, we argue, is the calling of a union to be a force for advancing the lives of workers. Within this framework, police unions fail to meet the criteria of a union or a valid part of the labor movement.

While it is true that police are workers, and thus hypothetically subject to the same kinds of exploitation as other laborers, they are also the militarized, coercive arm of the state. It is the job of the police to protect capital and, consequently, maintain class society. How can there ever be solidarity between law enforcement and the working class when elites call upon police and their organizations to quell mass resistance to poverty and inequality? The police force exists solely to uphold the status quo. Their material survival depends on it, and they hold a vested interest in the preservation and expansion of the most deplorable practices of the state.

We have seen this vested interest manifest itself very visibly over the past year. By calling themselves a union, police have utilized union resources to defend brutality and anti-Blackness. Police unions channel resources towards upholding racist practices in a few key ways:

These elements have clearly shaped the context that enabled the tragic circumstances of Freddie Gray’s death and speak to the contemporary moment in which Black lives are considered less important than job protection for police. Advocated for by the police union, The Maryland Law Enforcement Officers’ Bill of Rights (LEOBoR) aims to protect the rights of officers above the needs of the community. In cases where police misconduct is reported, such as in instances of “rough rides,” police officers do not have to answer questions until 10 days have passed and a lawyer has been consulted. Subsequently, the overall review process outlined by the LEOBoR empowers a hearing board of fellow officers to have final approval over any penalties imposed upon accused officers—this has resulted in the preservation of employment for nearly all accused officers despite the 3,048 complaints have been filed against 850 Baltimore PD officers (30% of its police force) since 2012.  If complaints do manage to make it past this extra layer of due process, union legal resources are used to defend the officers against charges of racist misconduct in court. By unconditionally insulating officers accused of brutality from facing consequences, police unions maintain the status quo of racial violence that upholds the exploitation of Black communities in particular, as well as other communities of color.

We recognize that these are not isolated incidents, but arise from a long history of policing as a profession. Police unions in particular emerge out of a long history of police intervention in labor politics and its complicity in racial violence. The modern U.S. institution of the police has roots in the repressive demands of powerful white capitalists. Overseers and slave patrols in the South evolved alongside the growing need to maintain “order” in early urban areas in the North. In fact, armed “night watches” mirrored policing practices by being a front line of defense against Native American raids on colonies. Policing in the U.S. has always served the needs of colonialism, racism, and capitalism by protecting the property of those who would steal land and exploit the labor of others. Neither the property of indigenous people nor the products of the labor of both workers and slaves has ever come under protection of the institution of the police. It has only ever been the property of the powerful that the police protect. Maintaining this system of relations is the so called “order” that police have sworn to defend.

In fact, early attempts by labor to organize and fight for rights and better pay and working conditions have historically been met with violence. These instances are many: from picket line fights to police enforced lock-outs; from crackdowns on rallies, like the Thompson Square “riot” of 1874 at a rally for the unemployed in New York City, when police indiscriminately brutalized men, women, and children; to massacres committed by private police, like the two dozen men, women, and children killed in the Ludlow Massacre; and by public police, notably during the Haymarket Massacre we commemorate every year on May Day.

Modern examples exist as well: police played a significant role in defending Jim Crow segregation. We have all seen the images and video of police siccing dogs on Black protesters, shooting them with water cannons, or billy clubbing them. Racist violence was not confined to the pre-Civil Rights South; Philadelphia police bombed the headquarters of Black radical organization MOVE in 1985, killing 11 people, including children. Recall also the assassination of Fred Hampton, leader of the Black Panther Party, by the Chicago PD in collaboration with the FBI. Very recently, the nationally-coordinated effort to crack down on and ultimately destroy the Occupy movement involved police departments across the country working in unison to stop the most effective modern social movement in opposition to economic inequality. American police as an institution have historically been and continue to be the violent supressive force used to maintain a white supremacist capitalist system on settler colonial land. If labor is to ever truly exert its power and challenge the corporate rule of the U.S., we will need to break the illusion that the police are part of the family of unions that make up organized labor.

The AFL-CIO is an organization truly concerned with issues facing the laborers of America today. The history of policing and its use of union resources to silence those who are harmed by police brutality runs contrary to this mission statement. As Shawn Gude recently put it, to become agents of progressive change and labor solidarity, police unions would need to work actively to negate their own power and abolish the police. We endorse this position, and call on the AFL-CIO to do so as well. As a union, we argue that the International Union of Police Associations fails to adhere to the goals of the Federation, and therefore should not be included in the list of unions which are fighting for worker’s rights.

This resolution came to our attention through In These Times.