Trump Turns to Red-Baiting to Save his Stumbling Campaign 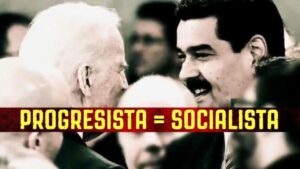 The accompanying graphic is a Trump campaign ad aimed at Spanish-speakers saying “Progressive = Socialist.” The photo shows Joseph Biden when he was vice president meeting President Nicolás Maduro at conference in Brazil. The well-known photo was published widely in the conservative Spanish language press to attack Biden as a socialist.

President Donald Trump, who is now losing the presidential election campaign by 12 points, is turning to vicious red-baiting against Joseph Biden and the Democratic Party. ABC News reports, “The presidential race stands at 53%-41%, Biden-Trump, among registered voters, and a similar 54%-42% among likely voters, with minimal support (in the low single digits) for the Libertarian and Green Party candidates.”

Voters have turned against Trump because of his mishandling of the coronavirus pandemic, as demonstrated by his own infection at a super-spreader event he organized in the Rose Garden that infected 34 White House insiders. The virus has now killed 215,000 Americans. So the president is now trying to change the debate to law and order and the dangers of socialism.

Trump spoke on Saturday from the White House balcony to a crowd of hundreds wearing red MAGA (Make America Great Again) hats and blue t-shirts in support of the police, in what he called “a peaceful protest in support of law enforcement.” He told his cheering followers, “We cannot allow our country to become a socialist nation.” He also referred to the Democrats as “Communists.” Racist and sexist, Trump has repeatedly referred to Democratic vice-presidential candidate Kamala Harris, whose parents are East Indian and Black, as a “monster.”

At the same time, Trump is now pressuring Secretary of State Mike Pompeo to release to the public the emails of former Secretary of State Hillary Clinton and is demanding that Attorney General William Barr indict Clinton and former president Barack Obama as well as former vice-president Joseph Biden for spying on his campaign in 2015-16. He calls Biden a criminal who should be barred from running for office. This is an unprecedented development in American politics indicative of Trump’s authoritarian attitudes.

Some 31% of Americans identify as Democrats, 25% as Republican, and 40% as independent. So for the Republicans, winning elections depends not only upon convincing voters, but also on eliminating from the rolls as many Democrats and independents as possible—often through changing the voter registration rules—or by closing or moving polling places, or distributing information with incorrect voting dates. All of this is aimed in particular at Black voters, Latinx voters, and students who might vote Democrat. This time Post Master General Louis DeJoy has also created chaos in the post office while without evidence Trump attacks mail ballots, being used more this election because of the pandemic, as contributing to fraud.

The Green Party, which is to the left of the Democrats, has always been small, but now it has been marginalized further by Democratic Party challenges to remove it from the ballot in several states and by reports that the Republican Party has been aiding the Greens. On the left, most support Biden, some support Howie Hawkins, presidential candidate of the Greens, and others reject electoral politics and call for building mass movements.

We can expect disruption and violence in some states on Election Day as the far right mobilizes. The possibility of Election Day violence became clear on October 8 when the Federal Bureau of Investigation (FBI) arrested thirteen members of an illegal armed militia accused of planning the kidnapping of Michigan Governor Gretchen Whitmer and the violent overthrow of the Michigan government.

American unions, Black and Latinx organizations, and women’s and LGBTQ groups are overwhelmingly now turning to getting out the vote for Joseph Biden. But they are also creating organizations to defend the voting process, the polling places, and the counting of the ballots for fear Trump and Republican governors may mobilize police or troops to attempt to steal the election. There is also some discussion among social movements and the left about how to resist an attempt by Trump to stay in office despite losing the election.

New Politics is in the midst of a fund drive. Please contribute here.

Posted October 12, 2020 Electoral Politics, United States by Dan La Botz
About Author
DAN LA BOTZ is a Brooklyn-based teacher, writer and activist. He is a co-editor of New Politics.