The “Striketober” Debate in America 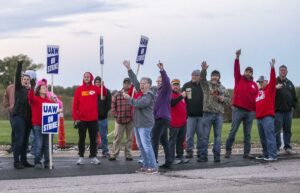 Throughout October and November, the media and especially the Left have been reporting what they called a “strike wave.” Is there one?

Today in the United States we have an uneven economic recovery. Employment is improving, theoretically giving workers great leverage. An extraordinary 4.4 million workers quit their jobs in September in what is called “the great Resignation.” Employers are having trouble filling positions, so they are raising wages. Yet unions represent only 6.3 percent of private sector workers, while only 10.8 percent of workers overall are unionized.

In this context, there have been some strikes. Some 1,000 miners struck in Alabama seven months ago, and they are still out. The bakery workers union led 1,000 Nabisco workers out on a strive in several states; that contract is now settled. The same union also took 1,400 Kellogg’s cereal workers out on strike, a strike now several weeks long. At John Deere, which manufactures tractors, 10,000 workers in the United Auto Workers walked off the job, an ongoing strike. But also in October and November 65,000 members of IATSE, the union of theater and movie workers, and the 30,000 workers in Kaiser Permanente hospitals renewed contracts, but without a strike.

The Guardian newspaper wrote of a “surprising burst of worker militancy and strikes” in what it called “striketober.” Joe Allen, a writer for the revolutionary socialist journal Tempest, wrote of a “strike wave,” though Nelson Lichtenstein in the social democratic journal Dissent, declared “this isn’t a strike wave” though “we sorely need one.” In fact, unlike the teachers strikes of 2018-19, a genuine strike wave that spread among 110,000 workers in the same industry, the recent strikes are fewer in number and divided among various industries and unions. We’ve seen a number of strikes, but not a wave.

Why do we socialists focus on strikes? First, often a vote on a proposed contract or a vote to strike is the first and perhaps the only time that workers participate in the life of the union. Many workers don’t vote for their local or national officers, so the contract or strike vote may be the workers’ sole democratic experience in the union.

Second, while union officials carry out the contract negotiations and put the strike vote before the members, if the members vote to strike, a shift within the union may begin to occur. The organization of the strike—sending pickets to plants, setting up picketing shifts, organizing strike rallies, dispatching delegations to visit other unions or community groups—begins to draw workers into action, giving them an opportunity to make decisions and perhaps for the first time to see themselves as the union.

Third, once the strike begins, with pickets confronting managers or scabs on the picket line and blocking trucks, the character of the strike as a real conflict between the bosses and the workers, becomes clear. Workers see that they are sacrificing their paychecks, while the distant stockholders, the corporate directors, and the plant managers continue to receive their salaries and dividends. Workers, sacrificing together, walking the picket line together, and fighting together against the boss, develop a sense of solidarity.

Finally, finding themselves in a conflict with the boss and often facing the police, workers become more open to thinking critically about both big business and politics. When that happens, socialist activists in the labor movement can offer strategic ideas and can raise the socialist critique of capitalism and propose a revolutionary socialist alternative, the idea that workers should take power and collectively own and run the economy. All of this makes strikes, but especially mass strikes that involve tens or hundreds of thousands, very significant events.

So far, we have had few large or militant strikes that could begin to create a more radical working-class consciousness. No doubt we will, but we are not there yet.

Posted November 18, 2021 Labor, United States by Dan La Botz
About Author
DAN LA BOTZ is a Brooklyn-based teacher, writer and activist. He is a co-editor of New Politics.