The Pull of Communist Culture 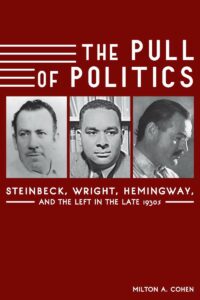 In this quite readable and accessible study, Milton Cohen describes Communist Party efforts to establish relationships with three major American writers of the 1930s – John Steinbeck, Richard Wright, and Ernest Hemingway. Of the three, only Richard Wright became a regular, though conflicted, Party member. Steinbeck and Hemingway, up to the late thirties, declined the Party’s advances.

By the late 1930s the American Communist Party had achieved its greatest influence in American society. The Depression and the rise of aggressive fascism in Europe and Asia coincided with a revised Party line. Moscow directed its global affiliates to abandon class struggle and anti-capitalist rhetoric and align themselves with liberal and socialist parties, excluding those who disputed the CP’s politics, including Trotskyists, in a “Popular Front” to fight international fascism. Central to this new tactic was the cultivation of left-leaning intellectuals and those in the popular arts.

Steinbeck, in his earlier novel, In Dubious Battle, writes about an attempt by Communist activists to organize pickers in a California apple orchard. As the title indicates, he regarded his subjects with a certain detachment, presenting organizers’ efforts as near-cynical manipulations of the hapless workers, whom he depicted as exhibiting a sheep-like group mentality. Cohen notes that “All are, to the author, no more than microbes squirming under his microscope” (23). Steinbeck’s emotional distance from the exploited and disadvantaged eroded when he accepted a newspaper assignment to write a series on the condition of migrant labor in California’s fields and farms. Personal contact with the agricultural proletariat quickly moved him from dispassionate observer to indignant advocate for reform. His next novel, The Grapes of Wrath – a work that brought him national notoriety – along with high praise from the left and death threats from the right, reflects his political shift.

Ernest Hemingway had been the object of severe criticism by leftists for his output in the early thirties – celebrations of bullfighting, hunting and sport fishing in the Bahamas, written during years of economic hardship for so many. He expressed only disdain for the “proletarian novel” so esteemed by the editors of the New Masses and the leftist literary establishment. “I do not,” Hemingway insisted to one critic, “follow the fashions in politics, letters, religion, etc.” (102).

Nevertheless, as Cohen documents, as with Steinbeck, personal experience tugged him to the left. In 1935 several hundred residents in the Florida Keys were drowned in a devastating hurricane, including some 250 WWI veterans assigned to a WPA project, whom the government had failed to evacuate in time. A furious Hemingway penned an article for the New Masses, “Who Murdered the Vets?,” accusing federal authorities of negligence and indifference. To Have and to Have Not, followed, depicting the uphill struggle of a have-not, a Key West native, driven to risk his life outside the law to earn a living for his family. The lot of Hemingway’s protagonist is contrasted with that of the “Haves,” affluent tourists moored in the yacht basin, leading empty lives in their well-appointed staterooms.

But it was the civil war in Spain that brought Hemingway into the leftist orbit, at least for the war’s duration. Repeated visits to Spain strengthened his conviction that only the militarization and centralization of the disparate Republican forces could defeat Franco’s fascist army. And since it seemed only the Soviet Union could supply effective aid to the Spanish Republic, he was able to ignore or suspend judgment on Russian infiltration of the Republican government, its suppression of social revolution and even the activities of the Russian secret police and Spanish Communists in their campaign of arrest and murder of radical and anarchist opponents – those they labeled “Trotskyites” and “fascist sympathizers.”

For Richard Wright, the Communist Party’s forthright stand against racism brought him into the fold. A postal worker with literary ambitions, he joined the Chicago branch of the John Reed Clubs, a Party front group that provided an encouraging milieu for young writers and particularly African-Americans. As he began to write and be published in leftist periodicals, Wright was drawn to become a Party regular, organizing meetings and presenting lectures. The greater was his shock and surprise when the Party summarily closed all the Clubs, swerving to emphasize attracting established literary figures not nurturing the unrecognized. Wright’s CPUSA connection was now through a very doctrinaire local cell concerned mainly with using him as an activist on Party projects, leaving him little time to write. His artistic interests and seeming reluctance to follow directives earned him distrust as a ‘bourgeois intellectual” and finally an “incipient Trotskyite” (66). After his “comrades” physically ejected him from a May Day parade, he decided to move to New York.

In a much more congenial context Wright became a reporter for the Harlem office of the Daily Worker and shortly thereafter published a short story collection – Uncle Tom’s Children – that brought him to popular attention and critical notice. But it was his later novel Native Son that placed him within the front rank of contemporary authors. A story of inter-racial sexual attraction and brutal violence, it was quite remarkably selected by the Book-of-the-Month-Club for the year 1940.

All three authors joined the American Writers Congress, a Party front group, by the late 1930s and were elected to mainly honorific positions. Hemingway delivering a memorable address at the organization’s 1937 meeting. Cohen notes that none of the three had made their connection with the Popular Front as a result of ideological conversion to Marxism or Stalinism. Their association was the result of personal involvement in specific causes – the exploitation of the Okies in California agriculture, the cause of Loyalist Spain, the racism pervading American society.

By 1940 the approving attitude of American artists and intellectuals toward Communism and the Soviet Union faded in the aftermath of the Nazi-Soviet Pact, Stalin’s seizure of the Baltic states, and the Red Army’s invasion of Finland. Uncomfortable with the notoriety that his authorship had brought him, Steinbeck began a withdrawal to more personal concerns. In a novel written some years later, East of Eden, he stated his credo – “the free, exploring mind of the individual human is the most valuable thing in the world” (282).

With the Republican defeat in the Spanish Civil War, Hemingway presented their cause in a far more nuanced light, in a new novel, noting the intrigues of Russian advisors and the atrocities committed by leftists – perhaps to partially assuage his own conscience. For Whom the Bell Tolls was immediately denounced in the Party press and praised by the anti-Stalinist left.

Divorce from the CPUSA was much more troubling and distressing for Wright, an active member. The sudden shift in the Party’s line on the war in Europe caught him unawares. In a number of public addresses and articles he had denounced the conflict as a struggle between rival imperialisms and insisted that “the Negro has no stake in this war” (298). On the eve of delivering a speech to the NAACP on the theme of “Not My People’s War,” Hitler invaded the Soviet Union, and for the CP the war shifted to a crusade for democracy. The Party leadership immediately ordered Wright to change his presentation and make an appeal to Black Americans to enlist in the segregated U.S. military. In contrast, A. Philip Randolph and other black leaders called for a massive march on Washington to demand an end to segregation in the armed services and job discrimination in the new defense plants. The CP opposed this and any autonomous initiatives by African-Americans, which were regarded as “negro nationalism,” a reactionary ideology. In any case, racism was to be subsumed in the interests of anti-fascist unity. Breaking his connection to the Party, Wright disengaged himself from Communist activities, expressing his disillusionment and disappointment in a national magazine. His action earned the label of “petty bourgeois degenerate” from his former comrades. In his later novel The Outsider, Wright has his protagonist reflect on how “he loathed the Communist attempt to destroy human subjectivity … his subjectivity was the essence of his life” (306).

Cohen notes that the movements of these three authors both toward and away from the sectarian left reveals “the tenuousness of a political allegiance created by a single issue or a few such issues” (309). Only complete ideologues could line up in obedience to the wisdom of “higher powers.”

The Party, or at least its Popular Front, enjoyed something of a fashionable resurgence during the war years, as the Red Army took the brunt of Nazi aggression. The “tenuousness” of allegiance among major novelists described by Cohen would be demonstrated over again among artists in a more popular medium, the motion picture industry. Here the various CP front groups active among Hollywood screenwriters, directors and actors would thrive in the early forties but quickly dissolve with the onset of the Cold War – their members forced to confess their heresy or be blacklisted from employment. The Popular Front, so attuned to the vagaries of Soviet foreign policy, was no more.

2 comments on “The Pull of Communist Culture”