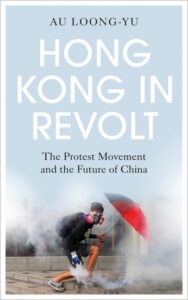 Review of Au Loong-Yu, Hong Kong in Revolt: the Protest Movement and the Future of China (Pluto Press, 2020)

Before SARS-CoV-2, the virus which causes COVID-19, entered the United States, the biggest news out of China was the months-long uprising in Hong Kong. Millions poured out into the streets over and again, strikes took place on top of student boycotts, government buildings were occupied, pitched street battles took place against police. For those who want to understand the uprising, its origins, and the still unresolved contradictions, Au Loong-Yu’s Hong Kong in Revolt: the Protest Movement and the Future of China published by Pluto Press (2020), is required reading.

A vivid picture of the struggle is painted by Au, as he combines an eyewitness perspective with deep analysis – stemming from his vast knowledge of Hong Kong’s political landscape. As a global justice and labor campaigner based in that city, his viewpoint on the underlying dynamics of the rebellion, as it unfolded, is as insightful as it is invaluable.

For audiences inside and outside of Hong Kong, having a clear view of the forces that were at work is at a premium. That a mass rebellion took place in a country which describes itself as having a socialist economy and a government which supports the working class, can be perplexing. Even a superficial view of life in China demonstrates that their society has more in common with that of the United States than it has differences.

China’s massive working class operates the workshop of the world, is fed by an enormous agricultural workforce, and has been ruled by the same Communist Party of China (CPC) since 1949. While the US has (near) universal suffrage and two ruling parties – which is an important difference – there is commonality in class power dynamics, where a tiny minority of bosses exploit the huge majority of workers.

The months-long struggle began in reaction to an extradition bill proposed by the Hong Kong government. Following the murder of Poon Hiu-wing in Taiwan by a Hong Kong resident who had fled the scene, China sought a legal mechanism for extradition. Horrific acts are often exploited by governments to legitimize legal changes for ulterior motives – and many saw this as a path that could end up with political activists being extracted to the mainland from Hong Kong.

Hong Kong had been under British rule from 1841 until 1997. The occupation began with the Opium War – when the British invaded China after the Qing Dynasty attempted to halt their sale of the debilitating drug. It took over 100 years for China to finally rid their land from colonial exploitation through the CPC’s successful 1949 revolution, but Hong Kong remained under British rule. A Basic Law agreement was made which would return the territory to China from Britain, with the stipulation that for 50 years after the handover, a capitalist economic system will continue.

Hong Kong’s was a colonial outpost city-state whose main economic function was as a trade center for capital and goods. The British extracted incredible wealth throughout their rule, and once China took over, there was no reason to change this profitable arrangement. It should go without saying that the rich Chinese tycoons of Hong Kong have only one interest in mind, maintaining their personal wealth and power, no matter who is in charge of the government.

This historical backdrop of the 2019 rebellion is important to understand because the main forces at work are the Chinese state as run by the CPC, the Hong Kong “pan-democrats” who are pro-capitalist liberals that tepidly prefer independence, and the mass movement which came together around five main demands.

As the dominant political force, China had no compunction when their representative and Chief Executive Carrie Lam, without a shred of irony, invoked a colonial era ordinance in an attempt to intimidate protestors. That a so-called socialist government was enforcing laws from the British occupation speaks volumes about their politics.

Some on the left are challenged by having a binary view of the world. In their view, one can only choose the side of US imperialism and aggression or whomever happens to be on the other end – no matter what. This has led to some holding the position that any political challenge to the CPC only furthers the hegemonic control of Western imperialism, and therefore must be an agent of those forces.

Every uprising that has ever occurred has had complicated politics – there has never been a mass struggle where all the actors have lined themselves up in neat rows, their politics clearly represented by different colored ribbons affixed to their sleeves. During the hundreds of protests which involved millions of people, some did wave American or British flags. It is also true that protestors burned train stations and interrupted the lives of those who were not the decision makers, but regular working people.

The operating conclusion of some leftists was that the entire rebellion was a CIA plot, that it must be opposed, and any crackdown by the Chinese government was justified. Taking a position that literally puts one on the same side as the baton wielding, rubber bullet shooting, Hong Kong police is clearly a bad take.

Which Side Are You On?

The simple question we must start with is: which side are you on? The side of the Chinese state and CPC, which was attempting to make the extradition of activists to mainland China much easier? Or on the side of people who were demanding that the law be withdrawn, that the government stop labeling protestors as “rioters,” to drop the charges against protestors, to investigate police behavior, to implement genuine universal suffrage? One can be against US imperialism, against CPC authoritarianism, and in favor of a mass uprising against the latter.

There’s no question that the movement had missteps, and the book does an excellent job describing many of the very real challenges that needed to be confronted. One interesting dynamic was the tendency of the protest movement to avoid structured organization, to stay away from formalized and accountable leadership, and not build spaces where strategy and tactics of the struggle could be discussed and debated. The author describes this as a product of a strong authoritarian government combined with a weak lead from the “pan-democrat” liberals. This tendency towards structurelessness certainly had reasonable roots, but also significant shortcomings which hampered progress.

To put it simply, Au states that a revolution in one city would be near impossible to achieve “given the absolute asymmetry of forces between Hong Kong and the [CPC] regime.” Gaining independence from the mainland CPC government would have required a much broader struggle across the entire country. The Chinese state had been successful in both diminishing news reports of the uprising on the mainland, as well as highlighting the few backward xenophobic elements within the protest movement and painted the entire struggle as being against mainland Chinese people, thus dividing them from the struggle.

Similarly to how the rebellion of 2019 was a continuation of the 2014 Umbrella Movement – a broad struggle for democracy which gained its moniker from protesters using umbrellas to defend themselves against pepper spray and tear gas canisters – the underlying contradictions which gave rise to the 2019 struggles did not disappear when COVID-19 entered the stage.

One important product of this rebellion has been a significant uptick in unionization. With an overall tendency away from formal organization, this has been an interesting development as unions are a place where structure, elected accountable leadership, and debate, are likely to occur. Organizing strikes and general strikes have centered the question of the role of workers within a rebellion. In a society with a significant pro-capitalism ideology alongside massive poverty, the issues of class and class power are important things to consider. Au writes, “In the first three months of 2020, there were 1,578 new union registration applications, a one hundred-fold increase from 2019.”

A stronger union movement and a larger left that has a vision that goes beyond universal suffrage to ask deeper questions about class relations continues to be a work in progress in Hong Kong. Au asks “if Hong Kong’s free market capitalism has the ‘tacit consent’ of many of the underclass it is first and foremost because of its success… The only problem is, will this situation last?” One could ask the same about the mainland’s so-called “socialism with Chinese characteristics.” A COVID-19 pandemic induced economic crisis could call many things into question – and has the potential to bring people across borders into unison in a way that the CPC could no longer control.

Anyone interested in getting a deeper understanding of how the 2019 rebellion of Hong Kong fits into the bigger China picture and what might be coming around the corner, will do themselves a favor by reading this important contribution by Au Loong-Yu.

Posted December 19, 2020 China, Civil Liberties/Repression, Hong Kong, Human rights, Social protests by Phil Gasper
About Author
Dennis Kosuth, a socialist and rank-and-file union activist for over two decades, has been a registered nurse for 13 years, and is currently an active member of the Chicago Teachers Union and National Nurses United. They have had articles about China published in Jacobin, Socialist Worker, and the International Socialist Review.