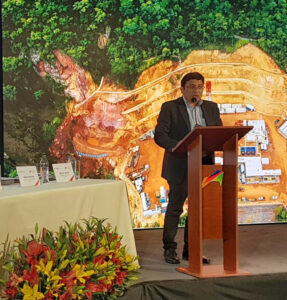 Extractivism is the only economic horizon of the Bolivian state, even as narratives shift depending on who is in power

Since 2019, Bolivia has been submerged in a profund political crisis. Evo Morales, of the Movement Toward Socialism (MAS), was president for 14 years (2006-2019), during which time important alliances were re-established among dominant sectors in the country, and the government became increasingly authoritarian. Within Bolivia, the November 2019 elections were questioned due to a lack of transparency and a series of other issues.

The entrenched, traditional right took advantage of the political instability linked to the climate of conflict and uncertainty following the elections to assume the presidency. While in power, Janine Añez oversaw brutal political repression and a corrupt and inefficient management of the pandemic. A year later, following the terrible Añez administration, the MAS returned to power with Luis Arce Catacora, Morales’ chosen successor, as the head of government.

This political crisis accentuated already existing polarization within Bolivian society. The narratives of coup d’état and electoral fraud dominated public debate, but neither was enough to describe the depth of the crisis or the violence that was meted out against the people of Bolivia during October and November of 2019, and during the first months of the pandemic. These narratives have since been converted into discourses of victimization and legitimation by those responsible for the crisis.

These narratives have also invisibilized the problems inside Bolivian society, problems which—paradoxically and regardless of the positions taken by members of both extremes—have been approached in very similar ways by the MAS government and the old right. One of these problems is the accumulation model, which has been and continues to be sustained by predatory extractivism.

Since 2005 and, with greater intensity since 2010, the Bolivian economy has been primarily driven by the sharp increase in international commodity prices, raw materials – such as oil, minerals, soybeans – that are traded on, or in reference to, international financial markets.

Bolivia is an important supplier of natural gas in South America, although less and less so, especially with regards to Brazil and Argentina. When international commodity prices increased in the early aughts the value of gas exports rose from $619 million in 2004 to $6.1 billion in 2013. In other words, the value of Bolivian fuel exports multiplied by ten, though the amount exported only doubled in the same period.

These fiscal dynamics can be examined to gauge the importance of this price increase on Bolivia’s economy. By 2013 – the climax of the commodities boom – half of Bolivia’s public revenue depended on gas exports. It was during those years that the government, then headed by Morales, began to place much emphasis on a leftist discourse legitimizing extractivism, which sought to discredit and reduce any criticism or questioning of extractivist processes of depredation and dispossession to a simplistic environmentalist position sponsored by imperialism.

The other problem is that extractivism is addictive. The promise from the left is that extractivism will make it possible to generate a significant fiscal surplus that will then be made available for the common good. They argue that this will lead to the transformation of the country’s productive matrix, which will in turn allow extractivism to be left behind. But experience shows us otherwise.

An illustrative example is the “Investment Projection of the Bolivian State 2010-2015,” which was presented in 2010 by then Minister of Economy and current President Arce. In the midst of the commodity boom, this plan concentrated 81 percent of public investment in extractive sectors or activities linked to extractivism. Meanwhile, health, education, small scale rural development, science and technology, among many other sectors essential to improve social welfare, did not exceed one percent of total public investment each.

Thus, when raw materials had higher prices, the objective seems to have been –in the words of a dear friend– “to fill the country with holes, take everything possible, and sell it off.” This logic is not very different from neoliberalism. Both share the notion of uninterrupted economic growth with a short-term vision, without considering the multiple forms of dispossession that are set in motion when growth becomes an end in itself.

Left-wing and right-wing governments in the region rely on increases in Gross Domestic Product (GDP) as a central indicator to demonstrate the effectiveness of their policies. And not one among them seems to care about the consequences.

Continuity in Times of Crisis

International commodity prices have plummeted since 2016. Due to the policies described above, this had a negative impact on Bolivia’s trade balance: exports decreased dramatically and the balance became a deficit. Trade imbalance began to reduce international reserves and gave rise to greater indebtedness.

The dollars had to come from somewhere to maintain import levels. By 2019, the signs of an economic recession were evident. Subsequently, the post-election political crisis and the coronavirus pandemic pushed the country towards an economic crisis that has not yet hit bottom.

As in most countries in the world, GDP growth in Bolivia was negative in 2020. However, the previous deterioration of economic indicators, which not only included a decrease in exports, but also an increase in unemployment and a high fiscal deficit meant that the country had to take on new debt to face the crisis.

Bolivia’s external debt, mainly with multilateral organizations, has been systematically increasing in recent years, so much so that between 2014 and 2021 it doubled, reaching historic records. On the other hand, the internal debt –of which the Central Bank is the main lender– also doubled between 2019 and 2021, going from US$6 billion to more than US$13 billion, according to the latest data published by the Fundación Jubilee.

All in all, the impacts of the crises in Bolivia are wide-ranging. But there are two dimensions that are worth highlighting: the one that has to do with the decrease in fiscal revenue and the other, which has to do with the increase in unemployment and informality. Both dimensions are accompanied by the reiteration of justifications to give continuity to economic processes related to extractivism.

Falling fiscal revenue is no small problem for a corporatist state. Over the last year, the Bolivian state has increased resources to finance gas exploration by hundreds of millions of dollars. At this time, the government in La Paz is considering modifying hydrocarbon regulations to encourage the entry of transnational capital.

Apart from its well-known environmental impacts, the expansion of the gas frontier leads to attacks on Indigenous and peasant community organizations, as is the case in Tariquía, in the south of the country; in the North Amazon, in the department of Pando and in other regions rich in natural gas.

But the Bolivian state is not only concerned with revenues. It also has to manage social unrest derived from the economic crisis and the increase in unemployment. Bolivia is a country characterized by a high level of informality, however in recent years, informal activities linked to extractive processes have increased substantially. The Bolivian state encourages and allows irregular extractive activities that generate income for social sectors that would otherwise have difficulty obtaining economic income.

Cooperative mining provides a very clear example. Mining cooperatives, which use socialist symbols and discourses of struggle, have transformed into true extraction companies –mining mainly gold– in different parts of the country. In contravention of mining regulations, they fill Bolivian rivers with mercury, and have been linked with the introduction of non-state armed groups into nature reserves, such as the Madidi National Park.

Hundreds of thousands of workers are employed by mining cooperatives (an exact number is not known), in addition to upper leadership, that takes home millions in profit, an amount that has increased in recent years as a result of the economic crisis.

Agribusiness, understood as a neo-extractive activity, has also increased its footprint in recent years and the consequences have become even more wide spread. The expansion of the agricultural frontier for the production of transgenic oilseeds is now the main cause of the forest fires that ravage the Amazon region of Bolivia every year. In recent years, different governments have had a fairly similar policy in this regard: promote the expansion of the agricultural frontier through lenient regulations and economic support, including with funds that should have been used to alleviate the health emergency.

Extractivism and its attendant socioeconomic effects are becoming a means of managing the economic crisis and consequent social unrest. In its productive and redistributive matrix of capital surplus, Bolivia today does not display significant differences from the country inherited from the colony, from the republic or from the neoliberal state.

Political narratives can vary depending on the circumstances, emphasizing elements of liberalism or progressivism, depending on who is in power. But no matter who is in the presidency, extractivism is the only economic horizon of the Bolivian state. Questioning extractivism is urgent and necessary: it is not an environmentalist cliché, but rather a profound critique of the way inequalities and hierarchies are built and reproduced on a planet in crisis.

This extractive horizon doesn’t appear to be negotiable in the short or medium term in Bolvia. Neither the Arce government, nor the left articulated around the MÁS, much less the right, which is trying to take over regional and local governments, have an economic vision sustained in anything other than vulgar extractivism. The most concerning is that this horizon has permeated and become normalized in society as a whole, including among popular sectors. This has been aggravated by intense political polarization, which ends up making the deepest and most serious problems invisible. There are but a handful of renewed struggles, like land defense and feminist organizing, that have the capacity and willingness to incorporate more complex discussions about these issues into their organizing practice.

Huascar Salazar Lohman is a Bolivian economist and a member of the Centro de Estudios Populares, Bolivia.
Devin Beaulieu is an anthropologist based in Bolivia.