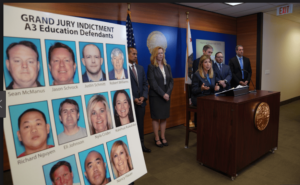 Charter schools are big business opportunities and lax oversight rules make them ripe for financial manipulation and outright theft. The latest charter school scandal just broke in California where two business operatives are accused of siphoning over $50 million in public dollars into companies they owned or controlled in a multi-year-long charter school scam.

Sean McManus, an Australian national, and Jason Schrock, his Long Beach business partner, the CEO and president of something called A3 Education, and nine others were just indicted in San Diego County. A3 is accused of enlisting small school districts in creating nineteen bogus online charter schools in order to obtain additional state funds.

A3 Education claims to provide a “wide variety of start-up services to aid school developers prior to and during launch. Working with school leaders and governing boards during the application and petition stages, A3 Education can assist with creating budgets, staff, marketing, financial, and strategic plans. Our dedicated team can review applications to ensure the mission and vision of the school is clearly portrayed throughout.”

However, according to San Diego County District Attorney Summer Stephan,“These defendants engaged in a devious, systematic public corruption scheme on the backs of students, their parents and the public that over time diverted millions of taxpayer dollars into their own pockets. Our team of investigators and prosecutors uncovered widespread misappropriation of public funds that extends across the state.” Charges include conspiracy, misappropriation of public funds, paying for student information, and conflict of interest. A3 “enrolled” about 40,000 students across California without providing them with any services. Among other scams, McManus and Schrock are accused of paying youth programs for student information and then listed the students as enrolled into their summer charter school programs. They received $2,000 for each student whose name appeared on their books. If convicted, McManus and Schrock face more than forty years in prison.

A Los Angeles Times report found that at least $8.18 million in state money went into McManus and Schrock’s personal bank accounts. Another $1.6 million was spent purchasing a private residence for McManus.

The Dehesa Elementary School District east of San Diego is one of the districts accused of conspiring with A3 Education. While the school district has only about 150 students, its authorized online charter schools that supposedly served 20,000 students. The district superintendent is one of the people charged in the case.

Even the charter school industry is outraged by A3, but it is also trying to protect itself. The California Charter Schools Association, which lobbies for charter schools, raised concerns about illegal activity by A3 Education with the California state education department in February 2018 and urged that allegations against A3 Education be investigated. Charter schools have every reason to worry as the industry sets up independent school “accrediting agencies” to circumvent legitimate oversight. A3’s Valiant schools, Valiant Academy of Southern California and Valiant Academy of Los Angeles were “accredited” by an organization called AdvancED, which also accredits online schools operated by K12, Inc., Pearson’s Connections Education, and Responsive Education Solutions. In its recent annual report, Pearson told stockholders that its online schools offered the company “high growth potential” in a market valued at $1.5 billion with a “5% annual market growth potential.”