Review: We Need To Talk About Putin 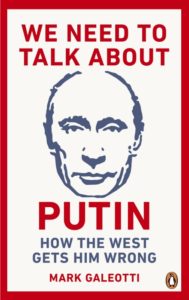 This week a fabricated case against Russian anti-corruption journalist Ivan Golunov was dropped, following a campaign by colleagues and the public. It presents an embarrassing setback for president Vladimir Putin, who in response has called for the heads of top Moscow police officials. However many of those who protested in support of Golunov have been arrested. In this context Mark Galeotti’s alternate perspective on Putin, as presented in his recent book We Need to Talk About Putin, provides an interesting read.

The BBC announced their new satirical chat show, Tonight With Vladimir Putin, shortly after Mark Galeotti’s We Need To Talk About Putin was published, but I imagine he will dislike it almost as much as the Kremlin, albeit for different reasons. The 3D animated version of the Russian President looks set to embody many of the lazy assumptions about Vladimir Putin – as a Machiavellian, publicity-hungry control freak – that Galeotti tries to discredit in his pithy Putin primer.

Putin occupies a similar space for many Western liberals as George Soros does for alt-right anti-Semites – a shadowy puppet-master behind, according to some, ‘Donald Trump’s election, Brexit, the rise of populism in Europe, the migrant crisis and even football hooliganism’. Galeotti makes a convincing case that Putin is less the master chess player of popular metaphor, more a reactive judoka (judo practitioner), opportunistically seizing the advantage created by the mistakes of his enemies.

He is aided in this effort by an army of smaller judokas – politicians, generals, entrepreneurs, media bosses – looking to exploit opportunities in the direction of policy that Putin, a much less detail-focused leader than state propaganda maintains, has broadly outlined. Galeotti compares this method to that of tsarism, an ‘adhocracy’ of courtiers aiming for advancement by pleasing the Boss. Galeotti rhetorically asks, ‘did Russia back Brexit?’ He concludes that, though the news channel Russia Today, news agency Sputnik, many Russian commentators, diplomats and social media ‘troll farms’ certainly did, ‘it is hard to say whether or not Putin or the Kremlin specifically backed the campaign. They certainly did nothing to stop it, but a consequence of this bottom-up system is that it can often be hard to know where a specific initiative originated.’

At the risk of opening the door to spurious ‘Putin is a Nazi’ comparisons, it also reminded this reader of Ian Kershaw’s description of Hitler’s underlings ‘Working Toward the Fuhrer’. Galeotti is right to insist that Russia’s authoritarianism is of a different breed, but when he balances the brutal repression of ‘traitors’ such as Chechan rebels, off-message oligarchs and LGBTQ+ people against, for example, the existence of women’s rights, he at times underplays the extent to which these are under attack. For example, in March 2017 the government decriminalised some forms of domestic violence, and Moscow’s mayor denied authorisation for protests in response. There is perhaps a more selective approach to dominating the social sphere when compared to fascism. Galeotti argues that local independent pressure groups are able to effect change as long as they are not seen to threaten the state, and points to a multi-party system filled with sock-puppet candidates and managed dissent instead of openly one-party rule. There is no internet parallel with the ‘Great Fire Wall’ of China, with self-censorship largely serving the same purpose. However these nuances will be of little consolation to those attracting the ire of the security services, such as the anarchists and anti-fascist students from Penza and St Petersburg tortured into confessions of supposed terrorist activity.

Putin’s own paranoia ironically mirrors that with which he is so often viewed. His ascent up the KGB involved little active espionage, with the late 1980s spent filing reports in East Germany and getting plump on German beer rather than acting as a Russian James Bond. But perhaps because his career was not very distinguished, he places inordinate trust in an overlapping web of spy and security services, who compete for favour by increasingly dubious briefings.

Putin is immensely rich – Galeotti estimates his wealth at £156 billion – as much as Jeff Bezos of Amazon and Bill Gates of Microsoft put together. As detailed in Naomi Klein’s The Shock Doctrine, policies initially driven by Yeltsin and the oligarchs with the full connivance of American neoliberals have caused income inequality to rocket since the fall of the Soviet Union, with about 65% of Russia’s net wealth now belonging to the top 10%, and Russian wealth stratification the worst of any of the major economies analysed in the World Inequality Database. Putin’s introduction of a massively regressive 13% flat rate tax in 2001 has exacerbated this trend. But Galeotti is not primarily interested in this large scale larceny, focusing his argument on the contention that Putin is primarily motivated by power, both as an individual (hence the ludicrous topless hunting pictures) and for Russia. His nationalism glorifies tsars and Stalin alike, as strong leaders in whose tradition he sees himself. He bridled at Obama’s description of Russia as a ‘regional power’, and much Russian foreign policy can be seen as asserting militarily a stronger presence than its economy merits (though the same is also true of the USA).

Galeotti argues that Putin ‘is aware that overall and when united, the West is so much more powerful than Russia, with twenty times its gross domestic product, six times the population, and more than three times as many troops’. And yet, it’s by failing to emphasise the lack of Western unity that Galeotti’s analysis is most limited. He considers Putin to be practising a 19th century imperialism, unlike the 21st century foreign policy of the West, but though the form may have altered the essence of inter-imperialist rivalry persists. As a consultant to ‘governments and commercial and law-enforcement agencies’ Galeotti must understand this, but this book instead posits advice to a monolithic ‘West’ in which we, the readers, are assumed to share the perspectives and interests of an alliance of Western governments.

This book does not aim to be a panoramic evaluation of Russian society, so perhaps should not be judged for what it is not. There are a range of useful examples deployed as Galeotti responds to a succession of Putin myths, most of which he successfully challenges. But Russia’s support for Bashar al-Assad’s murderous war in Syria gets only a cursory mention, a weakness that is hard to explain given the tenor of the rest of the book. We needed to talk about that as well.