The United States is experiencing one of the biggest worker movements in decades. While it is not organized by the labor unions, involves no strikes, and has had little fanfare, it is a common action–if not exactly a conscious collective action–being taken by millions. Over the last several months, millions of American workers have quit their jobs: about four million every month since spring. And the trend of saying, “I quit!” goes on. It has been suggested that one might think of this as an “unofficial general strike.” While that would be an exaggeration, still there is something to it.

Workers are quitting because their wages are too low, because their working conditions are unsafe, or simply because they want a different life, a better life. They want to be happy.

The cause of this Great Resignation, as it has been called, was the COVID depression of 2020 as the economy contracted by 32 percent and official unemployment reached 15 percent, though it may have been as high as 20 percent. Those who still had jobs sometimes worked in unhealthy conditions, without proper personal protective equipment or social distancing, while others worked from home often surrounded by the school-age child at her own computer, the needy child who wanted attention, the crying baby. Some workers in areas where there was high demand, whether high tech or delivery workers, simply burned out and quit. Others sick of their jobs, retired early. Some working remotely and no longer tied to the office, moved out of the cities and into the suburbs or to distant states. When employers called workers back to the office, they quit.

For several months, some unemployed workers received their state unemployment benefits and federal assistance that sometimes amounted to as much or more than their low wages had been. And so, a first for some, they had a paid vacation. In the United States, there is no national law governing vacations. Typically, workers must work one year to earn one week’s vacation. After, say, three years they may get two weeks, after perhaps after ten years they may get three weeks, and sometime after that, at 15 or 20 years, four weeks. Some workers have no sick-days and so use their limited vacation days when they or their children are sick. So, terrible as it was, the COVID recession and the state and federal unemployment benefits gave some workers their first real vacations ever, a taste of freedom.

For millions of U.S. workers, wages are notoriously low. For several years some unions engaged in a fight for $15 an hour. The demands made on the bosses at particular companies were accompanied by campaigns for legislation to raise the legal minimum wage to $15 or more in some states and cities, several of which were successful. Still, low wages have been a major source of dissatisfaction leading workers to quit their job.

Who quit? Prior to the pandemic, it was typically young workers in their twenties who quit, but in 2020 and 2021, the 30- to 45-year-old workers have seen a 20 percent increase in voluntary resignations. Resignations have been high in technology, in health care, and in hotels and restaurants, clearly for quite different reasons. Everywhere one goes, one sees “Help Wanted” signs. 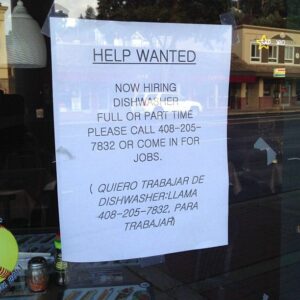 The biggest result of the Great Resignation has been the rise in wages as employers try to entice workers. Wages reached an average of $31 an hour in August, a yearly 4.3% increase and an all-time high. For twenty-five years, employers would not raise wages, but now from McDonald’s to Bank of America they are.

COVID has transformed the American work culture in many ways, and all of the ramifications of remain to be seen. The end of federal assistance programs and maybe one day the end of COVID may transform it again. For now, workers are quitting because they want to be happier at work. Perhaps nothing is more radical, if that desire can be transformed into more conscious, more collective mass action.

Posted October 20, 2021 Labor, Social Policy, United States by Dan La Botz
About Author
DAN LA BOTZ is a Brooklyn-based teacher, writer and activist. He is a co-editor of New Politics.