A Taxonomy of Capitalist Sharks

Trying to reform Capitalism is a futile as preaching Vegetarianism to a Shark. And nearly as dangerous. Stay away from those gaping greedy Jaws if you don’t want to get eaten alive—the sorry Fate of many idealistic Liberals and Social Democrats! (See fig. 1) 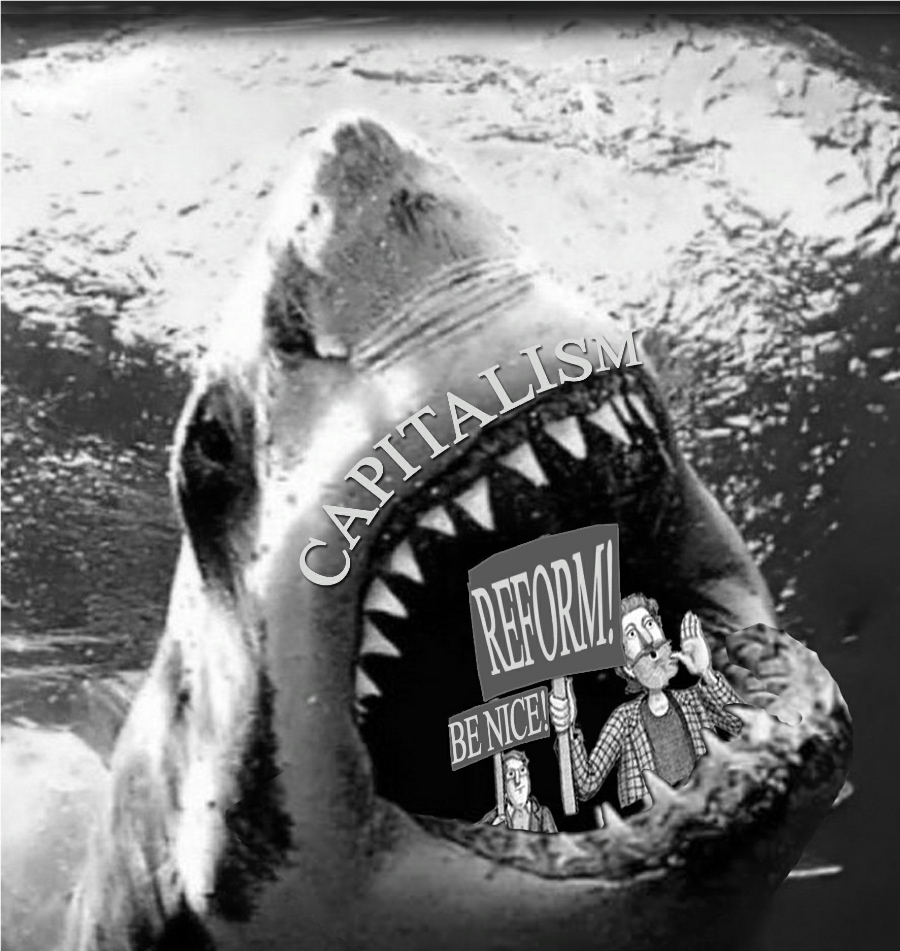 The sorry History of five hundred years of capitalist ‘Progress’ points to the Conclusion that, by its very Nature, Capitalism cannot expand without devouring Workers’ Lives and chewing up the Natural World—no more than a Shark can survive without gorging on fresh Flesh and Blood.

The original Breeding Ground of Capitalist Sharks was Western Europe, where they set about devouring the Commons, knocking down the Peasants’ Cottages with the thrashing Tails, hanging the Homeless as ‘Vagabonds,’ driving free Yeomen Farmers off the Green Land into Dismal Factories, devaluing the Labor of Women, and persecuting them as Witches.

Capitalist Sharks were sighted off the American Shores as early as 1492, ravaging the Caribbean. In their savage Hunger for Silver and Gold, they nearly exterminated the Native Peoples. So the greedy Colonial sharks were obliged to replace dead Native Americans with ever fresh supplies of Black Africans, kidnapped and sold to be worked to Death as Slaves. In their Home Waters, the voracious European White Sharks grew larger and hungrier, battening on Generations of toiling Men, Women and Children, sucking in and chewing up their Substance through fourteen daily hours of Dreary Labor in soot-darkened Satanic Mills or under the Lash on their American Plantations.

Naturally, as the Capitalist Sharks grew their Appetites increased, and by the end of the 19th Century ravenous full-grown Imperial sharks were swarming in a Feeding Frenzy, driven by a desperate Urge to devour the teeming Populations and fabulous natural Wealth of Africa and Asia.

As the 20th Century dawned, the Imperial Sharks began attacking each other (as sharks in a Feeding Frenzy will). The larger Capitalist Sharks naturally overcame the smaller, and the surviving Giants continued slashing and biting each other around the Globe, thrashing up blood-tinged Foam across both Oceans. Soon the various National Species were forming into great Schools for the purpose of Mutual Aggression. Political Ichthyology distinguishes at least four such Schools: the freemarketus omnovorus, the fascii viciocii, the stalinea rapacea, and the theocraticus ferocius.

But by the 21st Century, the older Species of European White Sharks were being challenged in their former Feeding Grounds by younger breeds of fast-growing Chinese, Indian, Iranian, Russian and Brazilian capitalist Sharks, better adapted for preying on the local varieties of Fish and increasingly more competitive. Soon new Oceans were churning with Blood, but with so many Sharks competing, the supply of big Game-Fish was soon depleted, and only the Masses of Little Fish were left to prey on.

The most successful Capitalist Sharks tempered their Ferocity with Guile. As the pickings got slimmer, these smarter Sharks adopted Protective Coloration to lurk in Shallow Shoals where they could sneak up on the Littler Fish (the only ones left) and devour them. Some clever Capitalist Sharks painted themselves Green. Others pretended to be Vegetarians the better to lull their Prey!

Political Ichthyologist Doktor Bertolt Brecht of Berlin predicted this development as early as 1930: ‘If sharks were men there would be an end to all little fish being equal, as is the case now. Some would be given important offices and be placed above the others. Those who were a little bigger would even be allowed to eat up the smaller ones. That would be altogether agreeable for the sharks, since they themselves would more often get bigger bites to eat. And the bigger little fish, occupying their posts, would ensure order among the little fish, become teachers, officers, engineers in box construction, etc.’

Following in Herr Dr. Brecht’s august Footsteps, your Humble Author has spent the past fifty Years patiently collecting Specimens of ‘vegetarian’ Shark behavior among both Left-finned and Right-finned Species from every corner of the Globe. These Anatomical Descriptions are designed to help the Reader recognize the different Species as they swim across the Aquarium of her TV Screen. This ‘Taxonomy of Capitalist Sharks’ is his modest scientific Contribution to the Cause of the Working People and other Small Fry in the Class Struggle (which the Rich have been waging against the Poor as a one-way affair for far too long!).

These Corporate Sharks pretend to be Vegetarians, but never forget they really are Man-eating Capitalist Sharks! No point in trying to get them to give up Human Flesh or even go on a Diet, as Liberal Reformers urge us to do. They can’t. It’s not in their Nature. (See fig. 1 again) 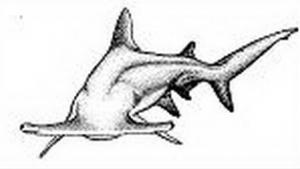 Today, these ‘Vegetarian’ Species are flourishing, despite the increasing Mistrust of the Little Fish, some of whom even want to ban Sharks of any kind from entering the Shoals(!) Indeed, through Natural Selection the surviving Little Fish have become smarter, and today Little-Fish Scientists and Whistle-Blowing Blowfish have been trying to understand why so many Little Fish continue to be fooled by their Predators’ apparently transparent ‘Vegetarian’ Disguises. The reason is that the Corporate Sharks have evolved glowing, Multicolored Media Eyes with which they are able to hypnotize their Prey. Corporate Species also inject a poisonous green Substance called ‘Campaign Contributions’ into the Small Fish General Assembly—effectively paralyzing its Members.

These same Corporate Sharks also fatten different Species of Judas Goatfish, bred to mislead the other Fish. For example, the Demagogic Goat-Fish divide the Little Fish by tricking different Species into fighting each other—Whitefish against Black Bass, Smoked Herring against Smoked Salmon—meanwhile blaming division on the crafty Hooked-Nose Gefiltefish. At the same time, VoteForMe Goatfish are bred to ‘represent’ the Little Fish by luring them into the waiting Jaws of Lurking Privatizer Sharks (who of course swallow up everything including the Schools where Fish Children learn to swim). There are also innocent-looking Do-Gooder Goatfish which lurk in NGOs, Think-Tanks, Universities, Trade-Union Bureaucracies and Left Parties.

The Irony of this situation is that the Billionaire Sharks and their pet Judas-Fish cry ‘Class War!’ every time some Liberal Little-Fish dares pronounce Forbidden Words like ‘Tax’ and ‘Spend.’ Nonetheless, many Little Fish secretly suspect that the Billionnaire Sharks don’t want to see their bloated Corporate Profits spent on Fish-Nursuries, Fish-Schools, Fish-Nests, Fish-Food and Clean Water. Meanwhile, Neo-Liberal Privatiser Sharks have nearly devoured the Undersea Commons in the so-called ‘Developing Oceans’, and now their Gaping Jaws are taking great Bites out of the Public Goods of the ‘Advanced’ Oceans.

Today, Capitalist Sharks, first sighted off South America in 1492, continue devouring the Planet, penetrating every remote Corner of the Earth, polluting the Seas, privatizing the Fresh Water, fouling the Air, cutting the Trees, killing off the Creatures and enslaving the People in their ever-increasing Hunger for more Profits. These Profits are deposited by the Capitalist Sharks in Fish-Banks and inflatable Underwater Bubbles, and in 2008 one of them exploded, plunging the world’s Oceans into Dark Depression.

Meanwhile, the Waters were growing warmer as a result of years of Frenzied Thrashing by Capitalist Sharks, and heat destroys the Coral Reefs on which the Little Fish Feed. Soon there will be no more Little Fish for the Capitalist Sharks to feed on, but this does not stop their Frenzied Thrashing for Profits. From this Somber Observation, Political Ithyology draws that Inference that Capitalism is no more likely to reform itself than a Man-Eating Shark is likely to embrace Vegetarianism. The Somber Inference points to an Unavidable Conclusion. To survive, we Billions of Small-Fry need to to turn the tables by uniting globally and waging Class War on the Billionnaire Loan Sharks who rule the World.

The name of the Game is ‘Billions vs. Billionaires.’ Numbers are the Small-Frys’ trump suit. “We are many, they are few” the Poet Shelley famously wrote (anticipating the ‘99 percent-ers’ by 200 years). As for Strategy, if there is one chance in a hundred of winning this Game, Planetary Self-Organization is the card for us to play. Not by fighting capitalist Terror with Terror, capitalist Violence with more Violence (in any case, they have all the guns) but through Solidarity and militant, united Resistance.[1]

Sound like a pipe-dream, Dear Reader? Just remember this: Thanks to the Internet, mass global Civil Disobedience can be organized in Real Time. The Day when all us Little Creative-Working-Fish wake up and go on a Planetary General Strike will be the Day when the Power of the Bankers and Corporations dissolves into thin Air. That day could be Tomorrow.[2]

1. Interested in joining a multi-player, online videogame called Billions vs. Billionaires (B&B)? Visit this Wiki set up for people interested in translating ecotopian visions and revolutionary class struggle tactics into entertaining popular foms designed to go viral and help save the world. Become part of phase one: ‘Collective Creation.’

2. These lines were written in August 2010. Five months later, the‘Arab Spring’—linked by Facebook, Twitter and Aljazeera—spread from Tunisia to Egypt, Morocco, Yemen, Syria and beyond, inspiring workers in Wisconsin (USA) to fight back against the Right-Wing capitalist offensive. Ironically, Arabs were ‘teaching democracy’ to Americans. The Fall brought Occupy Wall St., which then went viral around the world. What will the next ‘tomorrow’ bring??? (For a glimpse of a possible future, visit this link.