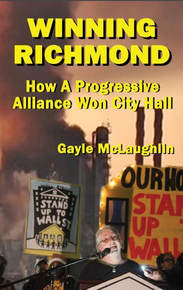 On August 6, 2012, an elephantine plume of black smoke rose over Richmond, California, sending some 15,000 people suffering from respiratory distress to area hospitals. Most of the city’s 110,000 inhabitants received “shelter-in-place” warnings to stay indoors and tape their windows shut to avoid breathing the deadly fumes. The smoke came from a massive fire at Chevron’s giant fuel-processing facility in the city, caused by slack maintenance and slacker management oversight. It wasn’t the first or the last mishap at the refinery. Since 1989, 14 such eruptions have been reported. In Richmond at least, the enemy has a name and a besmirched face.

Gayle McLaughlin’s Winning Richmond: How a Progressive Alliance Won City Hall is the memoir of the East Bay city’s former mayor, focusing on her work in building the Richmond Progressive Alliance (RPA), one of the most successful grassroots municipal political insurgencies in any American city, and detailing its nearly 20-year battle against Chevron for despoiling the environment, throttling local politics and cheating the city of billions in needed tax dollars. Add to that the RPA’s battles against other corporate malefactors, such as Wells Fargo for exacerbating foreclosures and you have a template for how embattled communities can fight back and win.

Upton Sinclair’s novel Oil touched on the early story of the Standard Oil Company’s despoilation of land and people before the trustbusters of the early 20th century lightly touched up what would become Chevron. McLaughlin exhaustively portrays the real, inhuman costs ordinary people and their environment paid and pay for the oil titan’s success.

McLaughlin’s memoir is more personal than labor organizer Steve Early’s book on Richmond, Refinery Town: Big Oil, Big Money, and the Remaking of an American City (Beacon Press, 2017). Early’s book charts the rise of the RPA through a scrappy organizing effort that combined electoral activity with a solid base of year-round activism in workplaces and the community. McLaughlin, a key participant in the RPA’s growth, focuses more personally on her struggles as a working-class woman who became not just a leader of the insurgent group, but spent 13 years as an elected official — eight years as mayor and five on the City Council — in a city government all too frequently dominated by Big Oil, Big Soda and Big Charters.

Despite the odds, McLaughlin won two terms as mayor, while also being a militant anticorporate organizer in a city of some 110,000 souls, 40 percent of them Latino, 25 percent African American and some one-third immigrants. Many of the latter are targets for Immigration and Customs Enforcement despite Richmond being a “sanctuary city” and the city police’s hands-off policy except in criminal cases.

Yet amid the wealth of detailed accomplishments and the buzz of activity, there’s a disconcerting element. Some of her accounts read like the stereotypically well-meaning but intrusive older sibling, as in the Council’s doomed effort to enact a penny-an-ounce “soda tax” on sugary drinks, which would be paid largely by precisely that section of the population most likely to be overweight and in resulting ill health. Richmond’s re-entry service efforts for ex-offenders are laudable but potentially overstepping. As good government such as Richmond’s is in such small supply nationwide, it may seem churlish to raise such quibbles, especially as the city’s overall violence-prevention efforts led directly to a 75 percent decrease in the homicide rate. Would that the de Blasio administration were so solicitous of people’s needs and similarly bolstered their capacity to organize. Yet the sheer good faith of McLaughlin’s efforts does clash in spots with the RPA’s insistence that change comes from the bottom, if only in tone.

Another quibble: In parts, the sheer amount of detail can be stupefying, as when McLaughlin outlines the makeup of a rent-control and just-cause-for eviction coalition comprising 19 local groups. It illustrates how good the RPA is at cohering allies, but did she need to enumerate not only the names of all the local groups, but their acronyms as well? Where was the editor with the blue pencil?  On the other hand, serving two terms as mayor of an embattled city, braving Chevron’s “history of corrupting politics” and building lasting grassroots alliances requires an attention to detail that is no fit meet for lesser beings.

Quibbles aside, the story doesn’t end with McLaughlin’s securing a workable progressive City Council majority backed by a growing grassroots activist organization, but with her announcement that she would run for lieutenant governor of California in 2018 as an independent. She won the support of Bernie Sanders’ Our Revolution state affiliate, but just one union, the small United Electrical Workers, embraced her effort. The rest, including the leadership of the militant California Nurses Association, went with a centrist Democrat whose one redeeming feature is supporting health-care reform, though not Medicare for all. McLaughlin finished seventh in the June primary, winning 4 percent of the vote, the highest ranking of any candidate outside the Democratic and Republican parties.

Unlike her mainstream party opponents, the unifying theme of McLaughlin’s career resounds, as her campaign website declared, “to stand against the pernicious influence of corporate greed in our elections. It’s not enough to say that we oppose Citizens United and the Koch brothers, we must be true to our convictions by running truly corporate-free campaigns.”

So say all of us.