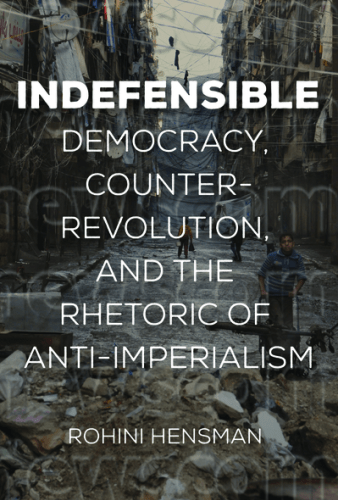 Rohini Hensman starts off her book with two simple questions: How has the rhetoric of anti-imperialism come to be used in support of anti-democratic counterrevolutions around the world? And what can we do about it?

The questions came about from her own experience as a Sri Lankan feminist and labour activist living in India. The daughter of “parents who consistently opposed imperialism in every part of the world” as “part of a more general support for democracy and human rights”, she wished to understand how something which is seemingly so ‘pro-human’ (anti-imperialism) could be used to justify that which is inherently ‘anti-human’ (state oppression). She structures her attempt by placing ‘pseudo-anti-imperialists’ into three categories: the first two are the tyrants and imperialists who utilise anti-imperialism to divert attention from their own crimes and the neo-Stalinists who regularly serve as apologists for Russian imperialism. As for the third tendency, it is arguably the most common one as it is capable of adopting the language of progressivism and even solidarity to downplay or support various forms of oppression. This tendency “seem unable to deal with complexity, including the possibility that there may be more than one oppressor in a particular situation”.

But more than that, Hensman argues that this tendency, which has come to dominate large segments of self-defined anti-imperialists, depends on “a West-centrism which makes them oblivious to the fact that people in other parts of the world have agency too, and that they can exercise it both to oppress others and to fight against oppression; an Orientalism which refuses to acknowledge that Third World peoples can desire and fight for democratic rights and freedoms taken for granted in the West; and a complete lack of solidarity with people who do undertake such struggles.” Here she joins those who have attempted to explore this tendency which has grown increasingly confident over the past few years. The Syrian dissident Yassin Al-Haj Saleh, who spent 16 years in prison for belonging to an opposition Communist party, argues that pseudo-anti-imperialists routinely deny Syrians “epistemological agency“. The British-Syrian anarchist Leila Al Shami calls it ‘the anti-imperialism of idiots’.

As mentioned, Hensman’s journey starts with Sri Lanka where following the end of the civil war in 2009, the ruling Rajapaksa regime “claimed to be anti-imperialist when EU nations, Canada and several others in the United Nations Human Rights Council (UNHRC) asked for an independent investigation into and accountability for the huge civilian death toll, as well as unhindered access of humanitarian agencies to hundreds of thousands of internally displaced people (IDPs) detained in military camps.” Rajapaksa used anti-imperialism and got the support of Cuba, Nicaragua, Bolivia and other countries including Russia and China, finally passing a resolution “commending the government for addressing the needs of the IDPs”. By 2014, when the government’s crimes in military-occupied Tamil-majority areas in the north and east as well as its brutal repression of dissent throughout the country was made clear, Evo Morales of Bolivia offered Rajapaksa a Peace and Democracy award. “When Sri Lankans did eventually manage to bring about regime change in 2015, it was no thanks to these pseudo-anti-imperialists”, Hensman continued, referring to the surprise election of Maithripala Sirisena in January of that year.

But the scope of Hensman’s book is more ambitious than that. Divided in three sections – “understanding imperialism”, “case studies” and “looking for alternatives” – it looks at Russia, Ukraine, Bosnia, Kosovo, Iran and Iraq as well as two chapters on Syria. With each case study, Hensman adapts her own analysis of imperialism and global capitalism made in the first section to the particularities of the countries analysed. Her goal is nothing less than to “suggest alternative narratives in each case, providing enough detail to enable genuine anti-imperialists, antiwar activists, socialists and humanitarians from other countries to identify the people with whom they should be expressing solidarity.”

In the last section, Hensman suggests five ways to fight the reactionary tendencies among the pseudo-anti-imperialist Left: (1) pursuing the truth and telling the truth; (2) bringing morality and humanity back into politics; (3) fighting for democracy; (4) bringing internationalism centre stage; and (5) pushing for global institutions to promote human rights and democracy. While four of these suggestions would appear uncontroversial, the argument for internationalism is of particular urgency. This isn’t to downplay the others; they remain necessary components of what is needed to move forward in building a serious internationalism that could ally itself with struggles for freedom and justice all over the world. Rather, bringing internationalism centre stage is a challenge to one of the most authoritarian concepts taken for granted by much of the world’s left today, namely that of economic nationalism. This includes supranational entities such as the European Union which preaches internationalism within the borders of Fortress Europe while militarising them to keep out some of the world’s most vulnerable people.

The Ukrainian Marxist Roman Rosdolsky, reflecting in 1948 on ‘the particularly devilish theoretical issue, the national question, whose horrifying actualité had just been demonstrated by Hitler’s infamous policy towards Jews and other “Untermenschen” as well as by Stalin’s less well known, and only somewhat less deadly, policies towards non-Russian nationalities in the Soviet Union’ concluded, among other things, that just as the working class is not de-facto socialist or revolutionary, neither is it de-facto internationalist. In other words, we must “first acquire through arduous effort the internationalist attitude that its general, historical interests demand from it’. I say ‘we’ rather than the original ‘proletariat of every land’ used by Rosdolsky because the latter seems to have less resonance with today’s audience and is likely to be rendered outdated in our era of anthropogenic climate catastrophe and automation.

We exist within the confines of capitalist society and challenging it requires serious work on ourselves as well as with others. The absence of internationalism, as is painstakingly obvious today, is fueling the Far Right and other reactionary forces (including among self-described leftists). If leftists wish to ‘out-nativist’ the rightwing nativists by, for example, suggesting that the UK Labour Party will ‘tackle illegal immigration’, they will only become de-facto partners of xenophobia while making themselves, at best, irrelevant or, at worst, an obstacle to those whose lives are shattered by borders. The same goes with Bernie Sanders focusing so much on US workers losing jobs to workers in Vietnam, China and Latin America – and that is putting aside the failure to acknowledge the much greater role of automation in the inevitable loss of jobs. As the late theorist Moishe Postone put it simply: the right (here, Trump) are much better nationalists than the left (here, Bernie). And internationalism-building also requires all four other components proposed by Hensman. After all, there are fascist anti-imperialists and transnational white supremacists attempting to organise with one another. They praise the ‘white’ Assad regime for crushing dissent, they terrorise refugees from France to Australia and demonise Muslims and/or black people and/or transpeople, all the while obsessing over controlling women’s bodies, regardless of borders. If opposition to this international alt-right isn’t internationalist, how can it succeed?

‘Putting [enter country] first’ erases the working classes who happen to not be within the borders of the state and, in the process, makes Trump/Orban/Modi/Netanyahu’s [and so on] arguments that ‘we aren’t winning anymore’ for them. As Hensman argues: “Capitalism is inherently global, and it has become even more so over the past half-century; unless the opposition to it is equally global, capitalism will always win. Globalising the opposition even to neoliberalism, in the first place, requires organising across national borders, which is facilitated by freedom of movement across those borders. Closing borders, as the far right wants to do, only sabotages the struggle against neoliberalism.” This fundamental notion is too often ignored by those who already have the privilege of freedom of movement. And the same goes for anti-imperialism. An anti-imperialism that is not internationalist cannot be effectively anti-imperialist. Just as anti-capitalism will always fail without internationalism, so will anti-imperialism. Rather than viewing those on the Left who fail to oppose authoritarian regimes across the planet as exceptions to be dismissed, we should be asking why they are so effective in silencing anti-authoritarians in the first place.

Hensman’s work will hopefully help make the case for introspection, one which demands community-building and solidarity regardless of borders. “It is absolutely necessary to rebuild an intellectual and political foundation for criticism and seeking change in the world, but metropolitan anti-imperialism is totally unfit for this job”, Al-Haj Saleh once wrote. “It has absorbed subordinating imperialistic tendencies, and it is fraught with eurocentrism and void of any true democratic content. A better starting point for criticism and change would be to look at actual conflicts and actual relationships between conflicting parties.”

An edited version of this post will appear in an upcoming issue of International Socialist Review.

Joey Ayoub is a Lebanese writer who blogs at Hummus For Thought. He is the MENA editor at Global Voices and at IFEX.