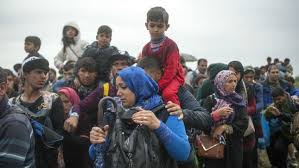 The recent Turkish offensive on north-eastern Syria and US withdrawal of troops from the region is unleashing yet another humanitarian catastrophe of epic proportions.

In the past few days over 130,000 Syrians have fled for their lives, in desperate search of safety. Dozens of civilians have been killed by Turkish bombs and assassinations by Turkish allied militias. Among the chaos ISIS prisoners have broken out of detention camps and are now running free – many of them foreigners, including children, whose respective states have refused to take responsibility for their nationals.

The Turkish invasion was green lighted by Trump (and likely Russia too) and has seen the US abandon its allies, the Syrian Democratic Forces (dominated by Kurdish militia), which it partnered with in the war to destroy the Islamic State. It is not the first time the US has abandoned allies in Syria, and it’s unlikely this betrayal will easily be forgotten by those who will suffer the consequences.

Turkey’s operation has two aims. It hopes to crush Kurdish autonomy in the north, much of which has been under the control of the Kurdish PYD since 2012, a group linked to the PKK, long seen by the Turkish state as a domestic enemy, and to establish a buffer zone in which to return Syrian refugees facing increasing hostility and xenophobia in Turkey. As many of the refugees are Arabs and would be returned to an area where many minorities – Kurdish and others – reside, such a move would likely lead to further demographic change, now a key feature of the Syrian tragedy. Syrian opposition groups allied with Turkey therefore fight for a Turkish agenda, and one that bears no resemblance to the Syrian revolution for freedom and dignity which began eight years ago.

Inhabitants of the region have good reason to fear a Turkish occupation. The Kurdish-majority city of Afrin, which fell to Turkey and allied forces last year, sets a terrifying precedent. Many civilians were displaced from their homes and prevented from returning, and there was widespread looting of abandoned property, as well as arrests, rape and assassinations.

Given the fears Syrian Kurds hold of ethnic cleansing by Turkish forces, and no allies willing to defend them, the PYD has been left with little option but to negotiate a return of regime control, ending an experiment in Kurdish autonomy which has led to significant gains for the population in the realization of many of their rights long denied by the Arabist regime. This was likely only a matter of time. When the regime handed power to the PYD it probably calculated three factors: that this transfer of power would stop the Kurds fighting the regime, allowing the regime to concentrate military resources elsewhere; that it would fragment and thus weaken the Syrian opposition to Assad along sectarian divisions; and that if the PYD became too powerful, Turkey would intervene to prevent them from expanding, allowing the regime to retake control.

Reportedly the deal brokered between the regime and the PYD-dominated SDF includes a guarantee of full Kurdish rights and autonomy. Yet it’s unlikely the regime will ever accept Kurdish autonomy, as it’s repeatedly made clear in public statements. Elsewhere in Syria all promises given by the regime in ‘reconciliation’ deals were not worth the paper they were written on. Anti-regime activists, both Arabs and Kurds, are now at risk of being rounded up and detained for possible death by torture. SDF fighters are also not safe. Just days ago Syria’s Deputy Foreign Minister Faisal Maqdad declared that they had “betrayed their country and committed crimes against it.” Whilst many Kurds, abandoned by the US, may feel safer under Assad than Turkey, some Arab civilians living in SDF controlled areas such as Deir Al Zour and Raqqa fear a reconquest by the regime and Iranian militias above all else, and feel safer under Turkish protection. Syrians are rendered desperate, and dependent on foreign powers for survival. Foreign journalists also under threat by the regime have fled Syria leaving atrocities to unfold out of sight of the international media.

The decisions being made today are the machinations of foreign powers, and it is Syrian civilians who will pay the price. The current power struggles between states are manipulating ethnic divisions leading to increased sectarianism which will plague Syria for the foreseeable future. The refusal of Assad to step down when Syrians demanded it is what has led to this bloodbath along with the repeated failure of the international community to protect Syrians from slaughter and the failures of both Arab and Kurdish opposition leaders to put their own interests aside and promote unity among those who wish to be rid of authoritarian rule. One by one, around the country, the regime has crushed any democratic experiment in community autonomy, and the international community seems willing to normalize relations with a regime that has held on to power through unleashing slaughter on a massive scale. What is happening today is a disaster not only for Kurds but for all Free Syrians.

Once again the situation in Syria has highlighted the moral bankruptcy of segments of the left. Many of those protesting Turkey’s assault on north eastern Syria failed to mobilise to condemn the ongoing Russian and regime assault on Idlib where three million civilians are living in daily terror. In fact they’ve failed to notice that for years Syrians have been massacred by bombs, chemical weapons and industrial scale torture. Some of those calling for a No Fly Zone to protect Kurdish civilians from aerial bombardment previously slandered Syrians elsewhere calling for the same protection as warmongerers and agents of imperialism. Once again solidarity seems dependent not on outrage against war crimes, but on who is the perpetrator and who is the victim. Syrian lives are expendable in the battle for narratives and grand ideological frameworks.

The Syrian tragedy is a stain on the conscience of humanity.