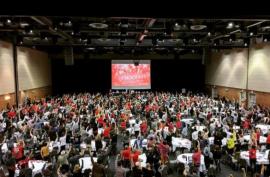 The socialist movement in the United States took a big step forward this past weekend as almost 700 delegates representing over 25,000 members of the Democratic Socialists of America (DSA) met at the organization’s biennial national convention in Chicago. This convention, the first since DSA more than tripled in size following last year’s election, brought together delegates from all of the country’s major cities and many towns large and small.

Most were new members who had joined in the last year either came out of the Bernie Sanders campaign or joined in reaction to the frightening prospect of the Donald Trump presidency. The convention cohered the hundreds of new members into a national organization in what was virtually a re-founding of the DSA. It gave them the experience of beginning to run their own organization, and the delegates adopted constitutional changes and policy resolutions that moved the organization to the left.

DSA was founded in 1982 by the merger of Old Left activists from the Democratic Socialist Organizing Committee (DSOC) led by Michael Harrington and by New Left activists of the 1970s who had created the New American Movement (NAM). Inspired by Harrington’s notion (called the “realignment strategy”) that it would be possible to reform the Democratic Party by driving out both the big city political machines and the South’s white racist Democratic Party politicians, from the 1970s to the early 2000s DSOC and DSA were oriented toward the progressive labor union officialdom, the leadership of the civil rights movement, and the liberal wing of the Democratic Party. DSA was affiliated with the Socialist International and identified with the Scandinavian Social Democratic parties that had successfully constructed welfare states with impressive programs of health, education, and housing. By the 1990s it was clear that Harrington’s strategy had failed and without a clear alternative perspective, a smaller, weaker DSA stumbled into the twenty-first century.

The Bernie Sanders campaign with its call for a “political revolution” and a fight against the “billionaire class”—and especially Sanders definition of himself as a “democratic socialist”—created a tremendous political upsurge, especially among the youth, and revived the DSA. Longtime DSA leaders, the organization’s small staff, and the leaders of DSA’s youth group, the Young Democratic Socialists (who renamed themselves the Young Democratic Socialists of America at the convention), seized the opportunity and recruited thousands out of the Sanders movement. When Trump won the presidential election and took office in January, thousands more joined. It is these mostly young activists who made up the delegates to the convention—one out of five a person of color, two out of five women—determined to make themselves into socialists and to make DSA their own. Naturally in such an organization the levels of movement involvement, of socialist education, and of political experience were highly uneven, but the convention—thanks to its “Socialism 101” style workshops went a long way in providing a common basis for what is virtually a new organization.

A Move to the Left

Like most conventions, DSA’s had plenary sessions with featured speakers, educational workshops, and opportunities to caucus, but the members demanded more time to discuss and debate the resolutions. With so many members new to both left politics and parliamentary procedure, at times the meeting was tedious, frustrating, even aggravating, but under the guidance of an experienced chairs who combined patience with firmness, it was a tremendous learning experience for the group. Through the long hours of debate with points of information and myriad motions, in the end the convention adopted a national priorities document that made the fight for a single-payer health care program a national objective.

The convention also voted to adopt several constitutional amendments and resolutions that moved the organization significantly to the left. The delegates:

·      Voted to leave the Socialist International (SI), based on arguments that the European Social Democrats had become the enforcers of neoliberalism and austerity, that the other member parties around the world included many authoritarian governments, and, finally, that the SI was disintegrating.

·      Voted to support the Boycott, Divest, Sanctions movement and to oppose efforts to criminalize it.

·      Voted to establish a People of Color Caucus.

·      Voted to establish a Labor Commission.

·      Voted to establish a forum for political debate within the organization.

The Democratic Party and Labor

DSA members by and large oppose both Trump and the neoliberal Democrats. As I argued before the convention, I view the progressive wing of the Democratic Party as the central issue. Two different motions—I was involved with both—attempted to get DSA to adopt a more critical attitude toward the Democratic Party and especially toward the progressive Democrats in groups such as Indivisible, MoveOn.org, and Our Revolution. The motion failed, but received about two-fifths of the vote, another sign of the growing radicalization of the DSA membership. A third resolution that called for DSA to begin to transform itself into a political party was tabled on the grounds that there were legal questions about running candidates. And, finally, a motion to draft Bernie Sanders for a People's Party also went down to defeat by an overwhelming vote.

DSA labor activists had pushed for the creation of the labor commission. That commission begins with 350 labor union members, while according to one of its organizers there are in DSA some 1,440 rank-and-file union members, or about 6 percent of the total membership, based on an extrapolation from a survey of 5,000 members. There was one labor gathering during the convention as about twenty teachers met to discuss rank-and-file labor perspectives.

The convention agenda, determined by earlier surveys of the members and delegates, recommendations from the convention committee, and by the delegates themselves was focused on health care and politics, and as was pointed out by delegates during the last session, did not include the critical issue of climate change. And, as one activist pointed out, there was not one motion on LGBT issues. DSA members, of course, are involved in both of those issues already and will no doubt continue to bring up them up at the chapter level as well as making demands on the new National Political Committee (NPC) in the future.

When at one point the chair moved an untimely disability resolution out of order, a small, short protest by a group of disabled members chanting “Nothing about us without us,” led to a motion to overturn to chair, another to suspend the rules, and then to the adoption of a resolution to add disability language acceptable to the disability caucus to the priorities resolution.

There were also moments of tremendous enthusiasm. Not only did DSA break with the Socialist International, but it made symbolic moves to identify itself with the broad left parties of the left in Europe and Latin America. At the banquet held on Saturday night DSA delegates cheered wildly the spokespersons from the Socialism and Liberty Party (PSOL) of Brazil, of France Insoumise, of Podemos of Spain, the Left Bloc (BE) of Portugal, and the British Labour Party. The Labour Party spokesperson could hardly speak over the riotous singing of “O Jeremy Corbyn.”

Election of a New Leadership

There were 42 candidates for DSA’s 16-member National Political Committee. The DSA Constitution specifies that, “Of the elected members, at least eight shall be women and at least four shall be racial or national minority members of DSA.” (A motion to expand the committee to 24 failed on Friday.)

Throughout most of its history DSA has had no history of caucuses, but this convention was different. Going into the convention there was a statement titled “Unity and Diversity” signed by a number of DSA members, which if not exactly a caucus represented an attempt by some longtime members to join with younger members around a reaffirmation of DSA’s “big tent” conception. A group of young DSA members—several of whom had been friends in YDS a few years back—created the left-leaning Momentum slate which emphasized a rank-and-file labor perspective and the Medicare for All campaign. There was also a Praxis slate, which promoted NGO-style training, combined with an emphasis on localism. Most of the candidates ran as individuals, some with little or no political platform. I ran as an advocate of a more critical attitude toward the progressive Democrats, which I had argued was the central issue facing DSA.

In the end, the convention elected six Momentum delegates and another independent close to Momentum, five Praxis delegates, and four DSA members from the old leadership team. I was not among those elected. (The election results can be found here where the winning candidates names are given in bold face.)

The new leadership team will head the largest socialist organization in the United States since the Communist Party of the 1940s and the Socialist Party of the early 1900s. The challenges are many, above all the Trump administration and the neoliberal Democrats, but the opportunities are also great. Future developments—the 2018 elections, a possible economic downturn, a turn to a more authoritarian government—will test DSA. If it can meet the challenges, DSA will lay the foundations for the first really mass socialist party in twenty-first century America.

The convention ended with the singing of the “Internationale.” I was delighted to be one of those leading the singing of the workers’ anthem. The Portuguese Left Bloc comrade turned to me and said, “It’s just so exciting, you are teaching them the Internationale!” And we both knew that she meant, we are helping a new generation of socialists in America to come to come into its own.

*Dan La Botz was an elected delegate from New York City to the DSA Convention and a candidate for the National Political Committee (NPC). He is a co-editor of New Politics.

Posted August 8, 2017 Left Politics, United States by Dan La Botz
About Author
DAN LA BOTZ is a Brooklyn-based teacher, writer and activist. He is a co-editor of New Politics.