Some thoughts on the deal between Syriza and the Independent Greeks

Here are some immediate thoughts. They include how we on the international and internationalist Left might respond. As well as what ­ in my opinion ­ we should say:

1 – Do not cry, do not wax indignant, understand. The great enlightenment philosopher Spinoza’s advice is pertinent. Let’s understand the logic (of which I am critical). This is not a time for absolutism. But neither for being mealy-mouthed.

2 – This is not a surprise. The meeting lasted an hour between Alexis Tsipras and Panos Kammenos. It was finalizing things. Discussions have been underway for some time. It will not do to say this is an emergency measure caused by falling short of 151 seats. And it certainly will not do to blame the Left, inside or outside Syriza. Why?

3 – As I explained in running commentary, seeking a coalition partner was never a matter of parliamentary arithmetic. It is about political logic.

4 – The argument for including ANEL goes like this: we face a national humanitarian disaster. Greece faces international foes. Just as it did under the Mussolini invasion and the Third Reich occupation. We cannot face up to that with 36 percent support. The Left must broaden its base. To Potami and Pasok would weaken the anti-memorandum position. ANEL will have to stick with an anti-memorandum line. So we will strengthen the anti-memorandum hand in the negotiations with the Troika by having them in the tent. Additionally, this will discombobulate the Right. For the moderates in Syriza it also gives a counterweight to the Left.

5 – (I am trying to do justice to the argument above. I do not agree with it.) This is not just tactics. It is a product of strategy. The theory of how to win hegemony this works from looks to the building of political blocs (resting on class blocs). That finds intellectual resource in a variety of traditions ­ Communist, Eurocommunist, Maoist, even variants of the Trotskyist. I can justify those claims, but not right now. Put the ideological tradition to one side. The issue is political strategy. Consider that and then you can make sense of the ideological justification which, like mathematics to the natural sciences, comes in as handmaiden.

6 – How can a party of the radical Left be in alliance with that Greek UKIP [United Kingdom Independent Party]? Well ­ the memorandum cuts through politics in Greece orthogonally (at right angles) to the Left/Right divide. It is possible to be right-wing on all the social questions and against the memorandum. ANEL may loosely be compared with UKIP. But it was formed out of a split from New Democracy on an anti-memorandum basis. UKIP in Britain is Thatcherite and struggles to articulate the mood against austerity.

7 – What is ANEL [Independent Greeks]? It is a nationalist, xenophobic, anti-German party. But it has not built its support ­ unlike Golden Dawn (GD) ­ on the basis of popular racism. It has built it by not being part of the coalitions which implemented austerity. That is an important distinction. But it is racist. Kammenos voted against the Pasok (when in government alone) law to grant citizenship rights to children of immigrants. Syriza supported the law. It has opposed the concentration camps for immigrants.

8 – How does that pan out? Some on the Left of Syriza ­ many ­ are saying that with 149 MPs to ANEL’s 13, Syriza will “hegemonize” Kammenos. Friends from the internationalist wing of formal majority of Syriza ­ 70 percent of the Congress ­ say that. But they are worried by the move and do not like it.

9 – The position of the Left Platform? Most of the Left Platform ­ led by Panayiotis Lafazanis ­ were privately more against a deal with To Potami or Pasok than with ANEL. Why? Because they share the strategy of building broad “popular alliances” shaped by what they frame as a “national struggle” against the Troika. Alexis Tsipras played with that language a lot in his victory speech last night. He spoke of sovereignty and national dignity. He did not describe the election as a victory for the Left. But it was a Left victory.

10 – The anti-racist mobilizations and demands to do better than Pasok on immigration, human rights, police brutality and jailing GD therefore become even more important in providing a counter pole to the presence of ANEL in the government. Kammenos ­ a poster boy of the shipping magnates ­ is pitching for shipping minister. That ministry has been in the hands of the maritime oligarchs for the last 40 years whoever is in office. People voted for a break with the old corruption, not for tolerating it under a Left government born of hope.

11- The KKE? Its leader did not stick the boot into ANEL in his speech on election night (but rightly attacked the GD as neo-Nazis). It will lambast the government as “more of the same”.

12 – The anti-capitalist Left is in a position to make a clear political explanation of what is wrong with the forming of the coalition. The clarity and strength of that argument is immediately bound up with the movements, against racism and for migrant rights especially.

13 – Was there an alternative? Yes. Syriza could have formed a minority government. But that would mean being very clear that the strategy was of using all positions of strength of the Left, inside and outside government, to conduct a fight with the Right, the oligarchs and the Troika. It is perfectly constitutionally possible to form a minority government. And politically. An aggressive challenge to the minor parties to vote against the government would put them under enormous pressure. In fact, with ANEL in the coalition, the government will have to rely on this tactic anyway. For example, if it wants to propose decent measures over migrants, racism, police behaviour, LGBT equality, etc., it will have to challenge the likes of Pasok and the liberal modernizing To Potami to dare vote against them, while facing down objections from ANEL. Either that or, despite the 149 to 13 balance of the coalition, the tail will wag the dog.

14 – We are at the beginnings of this process. Not the end. There will be much more of this kind of thing. We must prepare for it and calmly understand and explain. Tout comprendre c’est tout pardoner: to understand all is to excuse all, goes another maxim. It can lead to that. But it should not. There is a debate. Some genuinely believe this to be a correct policy. I am one of those who does not. There is nothing wrong in friends of the Greek movement and Left saying so. And if you do think so, you should say so.

15 – But we don’t want to demoralize people? No, we must not. The Left depends on hope and we must approach this ­ as all the future questions ­ from the standpoint of how we develop hope. That rests on deepening the impact of the electoral success in Greece and the breach it opens up over austerity and, whatever the political machinations here, over racism too.

16 – So we should make our case from the standpoint of:

Concretely, a massive and unified display of opposition on the international day of action on 21 March, which originated in Greece, against racism and fascism and for migrant and Muslim rights is now a date which all on the Left should bookmark and take action on.

There will be much more too. But we should approach it all in this spirit.

This article originally appeared in Counterfire.

*Kevin Ovenden is a longstanding progressive journalist, writer and activist who has followed Greece's politics and social movements for 25 years. A National Officer of the Stop the War Coalition and a leading activist in solidarity with the Palestinian struggle, he led five successful aid convoys to break the siege on Gaza, and was aboard the Mavi Marmara aid ship when Israeli commandoes boarded it killing 10 people in May 2010.

Please support this venture. Kevin's reporting is funded by the sale of 'Syriza: Greek For Hope' T-shirts , get yours from Philosophy Football 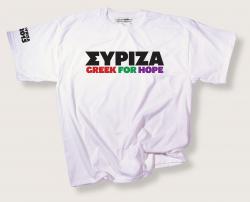