Solidarity with the Victims of Terrorism–No to War and Racism 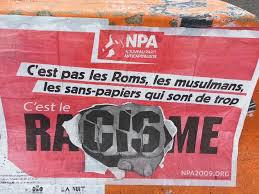 The following statement of the New Anti-Capitalist Party (NPA) was published on the International Viewpoint website on November 18, 2015.

The horrific attacks that took place in Paris on Friday night left 129 dead and 352 wounded – including more than a hundred in critical condition. This indiscriminate and reactionary violence, sparked nationwide – but also worldwide – astonishment, indignation and revolt. This weekend spontaneous solidarity rallies took place.

The New Anti-Capitalist Party (NPA) shares this feeling of revolt and solidarity with all those who are affected by this tragedy, the families of the victims and all those close to them. The deadly violence is especially shocking and unbearable that, instead of fighting the (states) governments, which are at war in Syria, Iraq or Africa, it deliberately strikes innocent victims here, members of the public, just as in Iraq and Syria where it imposes dictatorships.

Holland,Valls, Sarkozy and Le Pen tell us that France is at war. This is true, but the war is not ours. It is not a response to terrorism because it is the wars waged by successive governments of this country in Afghanistan, Mali, Libya, Syria, which created the chaos from which was born first Al Qaida and then Islamic state. And it is the decision of Hollande to intervene in Syria that caused the response of terrorists.

These bombings are supposed to fight the Islamic State, the jihadi terrorists, but in fact, together with the Russian intervention and bombings, they prop up the system of the person mainly responsible for the martyrdom of the Syrian people, the Assad dictatorship. There too it is civilians who are the first victims condemned to survive under terror or flee in fear of their lives.   France must immediately withdraw its troops from the Middle East and Africa.

No to National Unity

Hollande, just as he did as after January 7, called for "national unity" and has met all the political parties, with members in parliament or not, who support this call. [received this from all parliamentary parties associated with it or not.] This unity is a hypocrisy that has nothing to do with solidarity with the victims. Hollande (tries) is trying to use the tragedy in his favour and to get people’s support for his war policy. He also wants to silence the growing discontent in the country.

The right and the extreme right have gone full throttle, equating Islam and fundamentalism, proposing that "preventive detention" is imposed, that mosques are closed down and so on. Yet it is not Muslims who cause wars, on the contrary they are the first victims, in Syria, Iraq and France.

We must fight the causes of barbarism, namely the pillaging of poor countries by the big powers. For this, we need the unity of the workers and peoples, beyond their origins, their skin colour, their religion, beyond borders, against those who have built this world.

The choice of the government to implement the state of emergency goes in the opposite direction. The state of emergency does not guarantee the security of civilians. On the contrary, it gives the state control over the press and bans public meetings and demonstrations. Under these conditions, how to express our indignation and solidarity with the victims? How to protest against redundancies at Air France and elsewhere, against racism, against wars?

The NPA calls for the lifting of the state of emergency and an end to draconian measures.

In solidarity with the victims, to say no to war, no to terrorism, no to racism, we stand together.