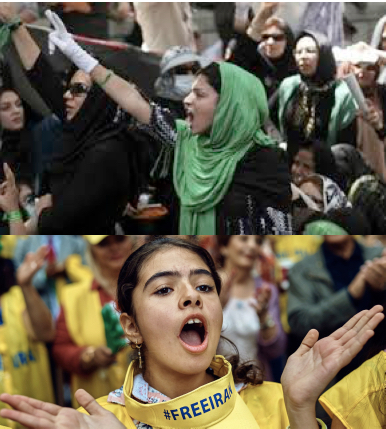 We, the Alliance of Middle Eastern Socialists, support the popular protests in Iran and call on progressives in the region and throughout the world to stand in solidarity with them as well. We believe it is an absolute necessity to build regional and global solidarity with anti-authoritarian struggles for democracy, social justice and equality, and to oppose patriarchy, racism, sectarian or homophobic discrimination and prejudice. We hope that the current protests in Iran will force the Iranian regime to withdraw its military and financial support for the murderous regime of Bashar al-Assad in Syria, and to end its reactionary interventions in the region. We also hope that the efforts by some elements to inject anti-Arab chauvinism into the movement will be rejected in order to reach out to grassroots struggles across the region.

Since December 28, 2017, the Islamic Republic of Iran has been shaken by a wave of social protests unprecedented since the 2009 Green Movement. The protests first erupted in Mashhad, a holy city and Iran’s second largest city near the northeastern border. Protesters opposed the rise in prices of basic goods and increasing poverty, chanted “death to Rouhani”,  “death to the dictator [Ayatollah Khamenei]” and called for an end to Iran’s military intervention in Syria and Lebanon. Protests quickly spread to more than 100 cities and villages throughout Iran, including the capital city of Tehran.

So far, at least 22 individuals have been killed (three in detention) and the violent security forces have arrested more than 3700 persons including 1000 in the southern city of Ahvaz, and many women who have been actively involved in the protests. Iran’s authoritarian regime has also blocked access to Telegram and Instagram instant messaging, which are heavily used, and has limited access to the internet by creating interferences. At least 100 student activists, especially leftists and progressives, have been arrested and some have been released.  Security forces have surrounded and in some cases invaded university campuses. Other students and labor activists are being hunted and kidnapped from their homes and dorms. Those captured may well face torture.

The Iranian regime, similar to other authoritarian regimes of the region, has accused the protesters of being part of an international conspiracy led by the USA, Saudi Arabia and Israel.

The protests are rooted in socio-economic problems, notably poverty, unemployment, and political repression, lack of democratic freedoms such as freedom of speech and assembly.  Furthermore, discrimination against women and national and religious minorities is intensifying opposition in an ethnically diverse population that has an 87% literacy rate and is connected to the world through the internet. 40% of the population lives under the relative poverty line and 90% of Iran’s workers are contract workers without any rights and benefits.  The minimum wage of $230 per month, which is one fifth of what is needed to support a family of four, is not even enforced. Many subsidies for basic food items and essential services were abolished between 2010 and 2014, during the presidencies of Mahmoud Ahamadinejad and Hassan Rouhani. At the same time the prices of basic foodstuffs are exploding. The share of healthcare in the budget has been slashed. Energy prices are going up. All this, combined with rising general inflation (12% according to the regime and 40% in fact) is a new blow to the purchasing power of workers and the poorest segments of society.

At the same time, billions of dollars in the budget are going to institutions/foundations related to the Islamic Revolutionary Guard Corps (IRGC). These non-accountable and tax-exempt foundations are among the largest holding companies in the Middle East. These foundations or “parastatal institutions” are in fact run by the state and led by the dignitaries of the regime and the leadership of the IRGC, Iran’s de facto military. They hold more than 80% of the Iranian economy.  Furthermore, in 2103, the Supreme Leader, Ayatollah Khamenei, controlled about 95 billion dollars through the Setad (“Setad ejraiye hazrate emam” or “Seat for the execution of the orders of the Imam”). It has shares in virtually every sector of the country’s economy, from finance to oil, real estate and telecommunications.

Large portions of the profits which the state/IRGC extract from the Iranian/Middle Eastern labor force are spent on direct and indirect military intervention and ideological propaganda in the region as well as funding security/police/basij forces inside the country.

The latests protests have actually been preceded by over a year of almost daily actions and strikes by workers against non-payment of wages and terrible working conditions, protests and strikes  by impoverished retirees, teachers, nurses as well as those who have lost their meager savings in bankrupt banks and financial institutions. Many political prisoners, including Reza Shahabi, a labor leader, have been on hunger strike off and on for several years.

Two statement by independent labor organizations have declared their support for the most recent popular protests. These statements have been issued by the Tehran Bus Workers Union and the Haft Tapeh Sugarcane Workers Union, as well as five other independent labor organizations (Free union of Iranian workers, Association of Electrical and Metal Workers of Kermanshah, Association of Painters of Alborz Province, Labor Defenders’ Center, Committee for the Pursuit of the Establishment of Labor Organizations). We support their views which are summed up in the following passage:

“We, together with the toiling masses of Iran, shout something that should be clear: Our demands for an end to poverty and misery should be realized; all oppression and prisons should end; all political prisoners should be freed and predators of social wealth and those responsible for oppression should be prosecuted and tried, no matter what position they hold; the wealth stolen from people by financial institutions should be given back; the minimum wage of workers and employees of both public and private sectors be increased fivefold and the massive income of government authorities be slashed; the right of workers to form independent trade unions and civil organization and their unconditional freedom of speech and press and freedom of political parties is to be guaranteed and the demands of millions of Iranian masses be realized.”

Most protesters have raised slogans against all factions of the authoritarian regime, whether the so-called “reformists” or the hardliners, while calling for democracy, social justice and equality symbolized by the slogan “Bread, Work and Freedom.”  Although the wave of street protests has receded after two weeks under the pressure of state repression, the struggle has now turned toward labor strikes and other industrial actions.  Many women’s rights activists, teachers, families of political prisoners, various well-known intellectuals and artists are also publicly defending the protests.  Families of political prisoners have been protesting outside the Evin prison in Tehran and other prisons to demand their release.

Similar to the uprisings and popular protests in the region of Middle East and North Africa since 2010-2011, these protests are a response to both economic impoverishment and political and social repression. They have the added feature of opposing the military interventions of the Iranian regime in other countries of the region, especially Syria, symbolized by the slogan “Leave Syria Alone, Pay Attention to Us”.

The Islamic Republic of Iran cannot be reformed. Since 1979 when the Iranian revolution quickly transformed into a counter-revolution, Iranian youth, women and workers have been subjected to a capitalist, reactionary and theocratic regime that represses, tortures and physically and systematically eliminates its opponents.

This is why we, the Alliance of Middle Eastern Socialists, support the popular protests in Iran and call on progressives in the region and throughout the world to stand in solidarity with them as well. We believe it is an absolute necessity to build regional and global solidarity with anti-authoritarian struggles for democracy, social justice and equality, and to oppose patriarchy, racism, sectarian or homophobic discrimination and prejudice. We hope that the current protests in Iran will force the Iranian regime to withdraw its military and financial support for the murderous regime of Bashar al-Assad in Syria, and to end its reactionary interventions in the region. We also hope that the efforts by some elements to inject anti-Arab chauvinism into the movement will be rejected in order to reach out to grassroots struggles across the region.

We oppose all foreign imperialist interventions and demand an end to the sanctions against Iran, which affect firstly and mostly the popular classes of the country.

We demand the release of all protesters, trade-unionists and other political prisoners.

Solidarity with the popular protests in Iran for democracy, social justice, and secularism!

Solidarity with our comrades!

No to Capitalism! No to Patriarchy! No to Racism! No to Sectarianism! Yes to the unity of the popular classes!

Our destinies and our emancipation are linked!