Determination in the Cause of Justice
By: Joan McKiernanMarch 6, 2016
[PDF][Print] 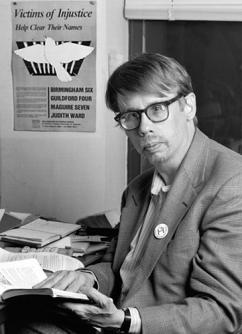 [Sandy Boyer, a veteran socialist, radical journalist and treasured contributor to Socialist Worker and New Politics (see his review in our current issue), died last month after a short illness. Joan McKiernan, a longtime comrade and friend, offered this tribute to Sandy that speaks so well for all of us at NP and SocialistWorker.org.]

SANDY BOYER, socialist fighter, died last week. His death is a loss to all the working-class struggles and the social justice movements in the U.S., Ireland and, indeed, the world that he was involved in.

Whether it was Teamsters or teachers in the U.S., political prisoners in Ireland, Puerto Rican independence activists, Palestinian solidarity campaigners or the Black Lives Matter movement, Sandy was tirelessly exercising his brilliant organizing skills on their behalf.

Descended from what we might call American royalty, his mother, Sophia Ripley Ames, came from a family that participated in the American Revolution. She was born in the Old Manse in Concord, Massachusetts, now a national historic landmark, in whose backyard in April 1775, the first shot in the American Revolutionary War was fired–a shot described famously by Ralph Waldo Emerson, who also lived for a time in “the Old Manse,” as “the shot heard around the world.”

Sandy’s parents went on to become revolutionaries of a different sort, supporting the working-class and Black struggles in the U.S. by joining the American Communist Party (CP), which they remained members of until the Khrushchev revelations of Stalin’s crimes in 1956.

His parents were writers. His father, Richard Owen Boyer, was co-author of Labor’s Untold Story, author of The Legend of John Brown and a writer for The New Yorker and a host of other journals and newspapers. Both his parents traveled to Berlin in 1940 to chronicle life for ordinary Germans under Nazi rule.

Sophia Ripley Ames was, for a while, secretary to future U.S. Supreme Court Justice Felix Frankfurter, and wrote a biography of Kwame Nkrumah, as well as Gifts for Greeks, a history of ancient Greek civilization for schoolchildren.

WITH PARENTS in the Communist Party, Sandy was raised as what we call a “red diaper baby.”

His family lived in Croton, New York, where many CP families lived, so Sandy was not on his own. In a radio program in 2014, Sandy discussed his life as a red diaper baby.

His family paid dearly for their political activity, as did many others. His father was blacklisted, losing most of his employment. Although he had been hired by The New Yorker to write political profiles, he found great difficulty finding work after he was called and refused to testify at the McCarthy hearing in 1956. He ended up finding some work writing for a scientific journal.

His mother was targeted by the Dies House Committee, the equivalent in the House of Representatives of Joe McCarthy’s Senate-based Permanent Subcommittee on Investigations, the principal vehicle for the blacklist. She headed the League of Women Shoppers, which was accused of being a Communist front.

Sandy understood the hardship of the period, as he knew the Rosenberg children, whose parents were executed by the U.S. government in 1953.

Sandy began his own political activity while he was still in high school in the 1950s, when he organized protests in nearby towns supporting the civil rights struggle in the U.S. At that time, pickets against Woolworths and other stores were growing in the North, protesting against segregated lunch counters in the South.

By 1962, when he was about 18, Sandy had joined the Young People’s Socialist League (YPSL) in New York City. He was in the forefront of the building of a new socialist movement, rejecting the legacy of his parents’ generation.

The organizations he supported rejected both capitalist societies, the U.S. and the USSR, as providing any basis for building a future workers’ state, and argued for the need for democracy from below. He worked with organizations that focused on the self-emancipation of the working class.

They argued that workers and other oppressed groups had to organize to take control and reorganize society to meet their needs, not the needs of the rich and privileged. They argued that simply electing a new president or supporting an army to make the changes would not be sufficient. (Sandy recently continued that argument in this article on the Bernie Sanders campaign.)

WITH THESE groups, he became immersed in working-class struggles and the fights of minorities–African Americans, women and LGBT people for justice and equal rights. He brought his excellent organizing skills and political acumen to help build rank-and-file union movements, working with Teamsters, postal workers, teachers, communication workers–all those fighting back.

In the early 1970s, Sandy joined us–Irish Americans building American support for the civil rights movement in Northern Ireland. As the Troubles intensified in the North, Sandy was there through it all–anti-internment, the hunger strikes and support for political prisoners.

He became immersed in the Irish American community and struggle; he was honored for this work, which continued until his death.

His contribution to that struggle was invaluable. He organized speaking tours for Bernadette Devlin McAliskey and other Irish leaders to inform and educate the American public of the political situation in Northern Ireland.

He built many successful campaigns in Irish America–supporting those, such as Malachy McAllister, who found themselves fighting the American government’s attempts to deport them back to Ireland where they were threatened by loyalist paramilitaries.

Sandy led a successful campaign in 1996 to end the unjust incarceration of Roisin McAliskey, Bernadette’s daughter, who was three months pregnant when arrested.

Since 1996, he joined John McDonagh and the late Brian Mor Ó Baoighill in presenting the popular weekly radio program “Radio Free Eireann” (RFE), which airs on WBAI. They have provided a provocative analysis of the continuing struggle of people in the north of Ireland for justice.

They provided a venue for younger generations to learn about what had happened and what was really going on currently in Ireland–from a radical point of view. This was particularly important as the peace process grew and was established with a new power-sharing government with the participation of Sinn Fein.

As the peace process solidified, press coverage in both Ireland and the U.S. became more narrow and less open to diverse opinion. John and Sandy provided a platform for those who did not conform with the new orthodoxy and did not get a hearing elsewhere.

Sandy conducted interviews with Irish Americans, such as Pete Hamill, and with Irish journalists and activists to explore issues and events that would not be covered elsewhere in Ireland or in the U.S.

He publicized the continuing struggles of Northern Irish people who are still seeking justice and supported the campaigns of the many political prisoners there, such as Marion Price and the Craigavon Two.

As well as presenting the best of Irish music, supporting Irish musicians here in New York, they also provided coverage of the controversial political issues of the day here in the city.

IN RECENT years, Sandy worked with the Brooklyn Green Party, where he was instrumental in organizing a meeting on the Black Lives Matter Movement, building support for the Howie Hawkins-Brian Jones New York state election campaign and for James Lane’s congressional run against the district attorney who made sure that Earl Garner’s killer was not indicted.

Sandy’s life of activism was also based on gathering knowledge, seeking to understand our past in order to build the struggles of today and the future. His knowledge of American, Irish and world history–both labor history and the history of oppressed groups–was immense.

He shared his extensive knowledge and experience by leading classes in Irish history and politics, American labor history and through his written contributions.

The breadth of his interest is indicated in just a few of his recent works. His review of recent works on slavery–“Slavery, capitalism and imperialism”–was recently published by the International Socialist Review.

He took up the issue of Puerto Rican freedom in one article. He particularly enjoyed exposing New York City’s supposedly “progressive” Mayor Bill de Blasio, as he did in this SocialistWorker.org article, when he asked shouldn’t New York City’s liberal mayor be focused on honoring his promises around affordable housing.

One of my favorite memories of Sandy is of him on a picket line–any line, any cause of the many he was involved in. He wasn’t like the rest of us who marched around, shouting our slogans, and perhaps speaking among ourselves. Sandy turned out–to the passersby.

He spoke directly to each person that came by. He explained why we were there, and why they should be supporting our cause. It was his calm and clear explanations and reasoning that often convinced people on a range of issues.

As the tributes come flowing in, we can see the admiration that Sandy earned for his work in the antiwar movement, South Africa solidarity work and Palestinian solidarity, to name a few. He was respected and loved on both sides of the Atlantic for his deep commitment to the Irish political struggle.

Sandy looked forward to building the successful American revolution, which he insisted had to be built on an integrated party encompassing the working-class organizations and the Black liberation movements confronting the current issues of criminal and social justice. Sandy is no longer able to contribute to those movements.

We can all appreciate the contribution that he made. But more important is to continue to build and support the movement, extend his commitment and put into practice the lessons that we have learned from him.

First published at The Broken Elbow.