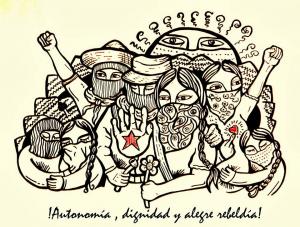 Twenty years ago the Mexican government signed the San Andrés Accords Regarding the Rights and Culture of the Indigenous that granted autonomy to Indian communities. Yet today, some argue that the indigenous people of Mexico, who represent about 10 to 15 percent of the population of the country, are worse off than they were then. What happened and where are things now?

The Chiapas Uprising of 1994, led by the Zapatista Army of National Liberation (EZLN), brought about, after a brief period of military conflict, negotiations between the Mexican government and Zapatistas. The government created the Commission for Peace and Pacification (Comisión de Concordia y Pacificación – COCOPA, made up of senators and representatives, to negotiate with the EZLN. The Zapatistas, based in the historically Mayan region of Chiapas, insisted that the negotiation involve not only themselves, but also representatives of indigenous people from all over Mexico as well as experts from civil society, largely university professors and social movement activists. After weeks of negotiation, both sides agreed on a document that recognized the indigenous people and their rights and granted the indigenous considerable autonomy. The accords were signed on February 16, 1996 with the presumption that, the government having signed them, they would become law.

However, when the Accords reached the Mexican legislature they were modified, changing the language in ways that weakened the rights and the autonomy of the indigenous. The Mexican Congress passed the Bartlett-Cevallos Law—named after the senators of the Institutional Revolutionary Party (PRI) and the National Action Party (PAN) who had written it—with the votes as well of the left-of-center Party of the Democratic Revolution (PRD). The Zapatistas consequently repudiated the new law and broke off any relations with the government and have since then refused to support any of the country’s political parties.

R. Aida Hernández Castillo, a researcher at the Center for Research and Higher Studies in Social Anthropology (CIESAS), who was one of the civil society participants in negotiating the Accords, argues that the situation of the indigenous people is worse today than it was then in two ways in particular. First, there is a new capitalist offensive aimed at appropriating the land and resources of the indigenous. Second, legal reforms have led to the criminalization of social protest. She writes:

“The indigenous people through their organizations have resisted the privatization and the commercialization of their resources, based on epistemologies and visions of the world that challenge the utilitarian and individualist capitalist outlook. It is because of this resistance that those in power have described them as being ‘backward and anti-progress’ and in the worst of cases as terrorists and violent. Their territories are being violated by the transnational mining company, by energy mega-projects, by the drug war, and by hydroelectric projects, often leading to displacements that leave their land ‘free’ for capital.” Hernández also argues that one will find a coincidence between the places where the drug war is being fought and the loss of indigenous territory.

So today, twenty years later, the Zapatistas and the many indigenous groups in Mexico—150 different peoples and indigenous barrios and 50 communities of indigenous residents—continue to fight for recognition, rights, and autonomy throughout the country.

Posted February 19, 2016 Civil Liberties/Repression, Mexico by Dan La Botz
About Author
DAN LA BOTZ is a Brooklyn-based teacher, writer and activist. He is a co-editor of New Politics.