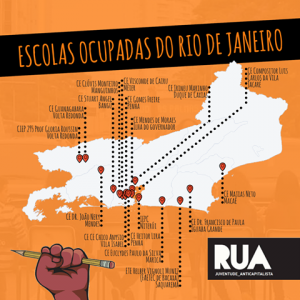 Teachers in the city of Rio de Janeiro, and in the state of the same name, have been on strike for more than two months now. More than a month ago students at one high school occupied their school in support. The student occupation spread to other schools and are there are now 76 schools occupied throughout the state of Rio de Janeiro and as many as twenty in other states to which the movement has spread. Students have been joined by parents and teachers and by volunteers from left political parties and individuals.

The school occupations have been spontaneous and completely self-organized, creating a loose network of organized schools. The Rio de Janeiro State Teachers Union has attempted—not entirely successfully—to create a structure to bring unity and organization to the movement. At the Amaro Calvalcani State School, a school that has received awards for excellence from the Rio de Janeiro State Secretary of Education, the fences and walls were covered with posters about the occupation and the gates were padlocked shut—the keys in the hands of the students. 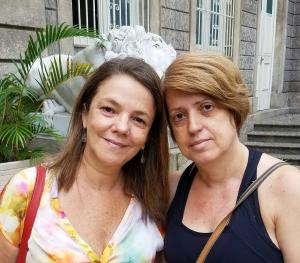 I talked with biology teacher Lenir Jane Rodrigues and Portuguese language teacher Edna Bandeira Prestes about the reasons for the strike and the occupation. The teachers explained that they were resisting privatization, demanding an end to cuts in the school budget, better maintenance of the buildings, an increase in wages, and improvement in the students' breakfasts and lunches. 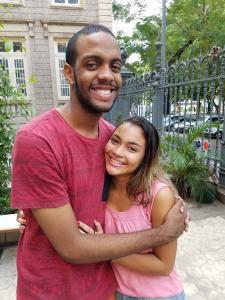 Students Laura Maria Araujo Bernardo and Gabriel Richard explained to me that yesterday, Mothers’ Day, many parents had joined the students at the school, celebrating both the mothers and the strike and occupation. At the moment, the school is dedicated to various cultural events. Today teachers were instructing students in a traditional dance based on women’s work washing clothes.

While the regular school is not in session, various left organizations such as the Party of Socialism and Freedom (PSOL), the Brazilian Communist Party (PCB), and the United Socialist Workers Party (PSTU) visit the school offering classes on various subjects: on the history of the military dictatorship in Brazil form 1964 to 1985, as well as chemistry and the Spanish language.

The teachers went on strike on March 2. Now in its second month, the strike and the accompanying student occupations have faced a series of difficulties. First, while the teachers have their demands, each of the occupied schools also has its own, so there is no common set of demands.

Second, at some schools, students have faced repression from the Military Police who have beaten occupiers. In the worst case, an exception to be sure, in one neighborhood a fight between drug dealers and police that left one police officer dead—but then the police returned to kill 11 people, supposedly drug dealers, but who according to neighbors some had nothing to do with criminal activities. Some of those killed were family members of teachers and students involved in a local school occupation.

Third, in some schools, groups of seniors, who hope to graduate soon, have invaded the schools to break the strike and occupation, which they see as frustrating their plans for college or work.

All of this, of course, is taking place in the context of a deeply divided government, where the conservatives have been attempting to impeach President Dilma Rousseff of the Workers Party (PT).

Posted May 9, 2016 Brazil, Labor by Dan La Botz
About Author
DAN LA BOTZ is a Brooklyn-based teacher, writer and activist. He is a co-editor of New Politics.